This article was authored by Janise Mitchell,
Deputy CEO of the Australian Childhood Foundation.
In trauma informed therapeutic out of home care programs, the concept of therapeutic parenting has been introduced to help define the orientation of carers in their task of parenting children with trauma backgrounds. In this article, I have attempted to describe in more detail the theoretical underpinning of the term and its implications for practice.
Therapeutic parenting is a definitional term which has only recently begun to play a role in the literature. It appears to have garnered support because it offers a way of describing the approach required by carers to achieve change related goals in relation to children’s past traumatic experiences. It is also becoming an important means through which the evidence base associated with the neurobiology of trauma and attachment are integrated in practice (Mitchell, 2008).
Whilst the exact origins of therapeutic parenting with traumatised children are unclear, there are obvious parallels between therapeutic parenting and therapeutic communities with a shared focus on the creation of a therapeutic environment (Pughe and Philpot, 2007).
Therapeutic parenting has been described as a way of compensating children for what they missed out on when in the care of their parents or early carers and when the subsequent level of developmental disruption for children is severe (Cairns, 2002; Schofield and Beek, 2005; Fisher et al, 2006; Pughe and Philpot, 2007).
For example, Pughe and Philpot (2007) suggested that 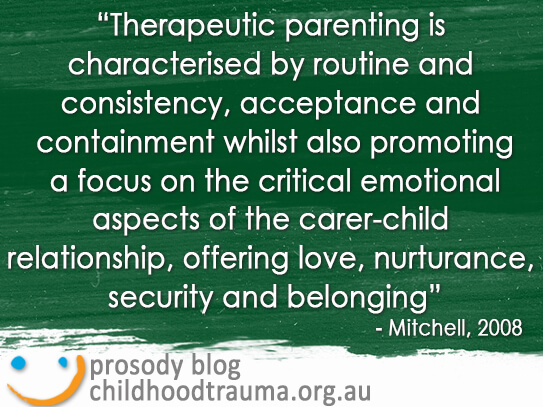 Therapeutic parenting is characterised by routine and consistency, acceptance and containment whilst also promoting a focus on the critical emotional aspects of the carer-child relationship, offering love, nurturance, security and belonging (Mitchell, 2008). The approach seeks to assist children to challenge their negative internal working models of the relationships and thus open space for children to begin to experience relationships and their world differently. Carers must be attuned to the motivations for children’s behaviour and seek to respond to these (Wilson, 2006).
The primary purpose of therapeutic parenting is for carers to provide the secure base that has most often been denied them by their birth parents (Fisher et al, 2006; Schofield and Beek, 2005). Children coming into care are often mistrusting and have a set of assumptions or expectations about the carer that are based on their prior experience of abusive adults (Streeck-Fischer and Van der Kolk, 2000; Perry, 2002). Indeed, Hughes (2004) noted that children

‘…are unlikely to view caregivers as being a source of safety, with whom they can relax and whose direction they can comfortably follow…’ (p.263).
In response to these challenges, and drawn from earlier work (Schofield, 2002), Schofield and Beek (2005) proposed a model of therapeutic parenting drawn from attachment research that comprises five dimensions including promotion of trust and availability, reflective function, self-esteem, autonomy and family membership, from which comes a sense of identity and belonging. Further, Fisher et al (2006) have argued that attachment-based therapeutic parenting must pay particular attention to remediating the negative consequences of early abuse and neglect on stress and emotional regulatory systems.
Articulating a therapeutic parenting approach built upon a synthesis of attachment and trauma theory, Cairns (2002) is one of only a few practitioners and writers in the field to incorporate the critical contribution of the neurobiology of trauma literature into a therapeutic parenting approach. In doing so, Cairns (2002) has provided a framework for understanding the needs of abused children as not only reflecting an inability to trust and a poor sense of belonging but also as children who function in a state of constant hyper-arousal, whose memory functioning and capacity to learn has been compromised, who on a daily basis experience the intrusion of past trauma into their present and who cannot easily regulate their emotions or connect emotions with behaviour.
Cairns (2002) suggested that therapeutic parenting has a therapeutic purpose via ‘an intentional effort to promote change’ often requiring carers to parent in ways that may be ‘counter intuitive’. Citing the work of Brown, Scheflin and Hammond (1998), Cairns (2002) described a three phase model of therapeutic parenting to assist children to recover from the debilitating effects of trauma and attachment disruption. Incorporating the phases of ‘stabilisation’, ‘integration’ and ‘adaptation’, this model argued the need for carers to first establish safety, stability and an understanding about the impact of the traumatic experiences for the child, later assisting the child develop both emotional literacy and regulation as they begin to process the effects of the trauma and develop greater capacity to have a sense of their past, present and future.
Therapeutic parenting is a critical component of many therapeutic out of home care programs. What do you think of my conceptualisation? Is it relevant to your understanding of the approach that carers take in looking after children and young people in out of home care? Is it as relevant for residential care as it is for foster care?

Vicky Averkiou shares how the stories given within cases can produce ethical dilemmas that in turn impact on Child Protection Practice.

Moving and Soothing – Body based programs for children

This blog post is written by Pauline Lodge, Manager – Professional Education Services at The Australian Childhood Foundation. Recently, Joe Tucci wrote a series of blogs exploring the concept of ‘safety” and what occurs for children when that safety has been violated. He identified three principles for understanding safety in our work with traumatised children …

The Stages of Change

‘The Stages of Change’ blog article was written by Rosie Barker, Therapeutic Specialist, Regional Victoria at Australian Childhood Foundation.   Realistically, we are all constantly in the process of changing from being one thing to being another. But how often do we pause to consider this as a process and that it occurs in stages with …