This article was authored by Evelyn Field, psychologist, professional speaker, best selling author and regular media commentator who has spent over forty years dealing with school and workplace bullying. 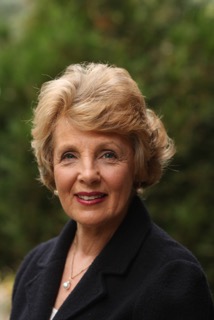 Although most schools try to reduce bullying, one in five children still experience bullying (Rigby). For some children, the trauma of being bullied, their biopsychosocial injuries, loss of identity and social connections together with a potential for suicidal behaviours, is a major childhood challenge.

The DSM V mentions workplace bullying, harassment and ostracism, but omitted school bullying! No wonder that mental health professionals, schools and society don’t take school bullying seriously! Yet the media and Google constantly expose tragic school and cyber bullying stories. There are many websites about school bullying, eg NCAB, (Australia), Stop Bullying, (USA), Kidscape (UK) and Prevnet, (Canada). They share a common lack of detail about the physical, psychological, social and cognitive symptoms and the possible impact into adulthood.

My paper will introduce some issues that the DSM V has neglected. But first let us imagine what being bullied feels like? Strange how most people clearly recall instances of bullying from years ago, but find it harder to recall the presents they received that Xmas! It would seem that bullying is an indelible experience, remembered forever. We need to understand what it feels like and what it means to the target, to be the receiver of nasty knocks, mean verbal attacks, overt exclusion or subtle roll of the eyes? Once isn’t nice, but numerous occasions may lead to psychological and physical implosion.

Unlike many other forms of violence, some bullying behaviours are subtle, yet their injuries can be long- term and life changing. Basically school bullying affects physical health, emotional & social well-being. It can impact upon schoolwork and career choices, interfere with normal socialising, eg shyness, social difficulties, dating. It can impact on the bully, bystanders, family and society. Bullying damages the brain, it causes psychological injuries, eg anxiety, depression, PTSD, suicidal behaviours and changes personality. The impact can extend into adulthood for targets and bullies.

It is not just the bullying events that cause the injury but the bullied person’s perception, beliefs, personality, reactions, life experiences that threaten them, altering their physical and emotional wellbeing.

According to Anthens (2010) “Bullied brains showed observable abnormalities in corpus callosum — vital in visual processing, memory, and more.” “There may be subtle neurocognitive difficulties”. “Being ostracized by one’s peers, throws adolescent hormones out of whack, lead to reduced connectivity in the brain, & sabotages growth of new neurons.” Vaillancourt (2011) noted deficits in prefrontal executive functions and medial temporal lobe memory functions.

The damage may persist into adulthood

Tragically, the physical and psychological symptoms that result from school bullying may persist into adulthood. Arseneault (2008) believes that abusive experiences, may lead to the appraisal of normal events as threatening, thus bullying can trigger a cycle of victimisation that lasts a lifetime. While Pynoos et al. (2009) is concerned about the fact that school bullying occurs during childhood and adolescence and its impact on the youngster’s developing bio- psycho-social systems are not known. 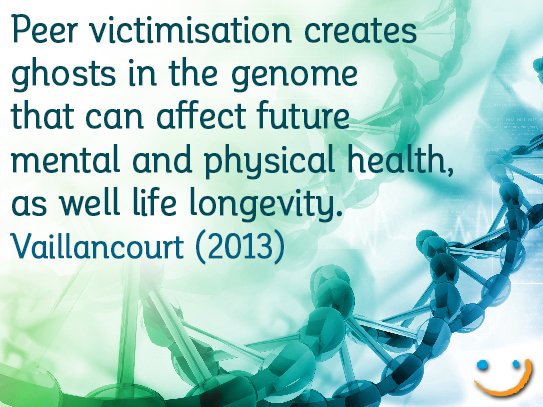 Vaillancourt (2013) concludes “peer victimization impacts upon biological functioning” and “creates ghosts in the genome that can affect future mental and physical health, as well life longevity”. Copeland (2013) cites the long term effects as does Wolke (2013) who writes, “Being bullied is not a harmless rite of passage but it throws a long shadow over affected people’s lives. Involvement with bullying in any role was predictive of negative health, financial, behavioral, and social outcomes in adulthood.” Lereya (2013) encourages health practitioners evaluating self-harm to regard “being bullied an important potential risk factor.”

Schuter (2013) believes that bullying can lead to depression, anxiety, posttraumatic stress, and suicidal ideation. Takizawa, (2014) “Bullied children are at greater risk of obesity, strokes and heart attacks later on.” Dieter Wolke (2015) “Our findings suggest that being bullied has similar and in some cases worse long-term adverse effects on young adults’ mental health than being maltreated.”

Thus bullying changes how our genes work and how they shape our lives, and likely what we pass along to future generations.

Why is bullying so bad? I believe that bullying symbolises personal humiliation and ostracism from the tribe. It threatens our survival instinct and forces us into survival mode. Campbell’s (2004) research reveals that the primary fear of adults, children and adolescents is fear of negative social outcomes. Williams (2011) states that “ Humans need to belong. Yet they also commonly leave others out. Animals abandon the weakest to ensure the survival of the fittest. Common though they are, rejection and exclusion hurt. Endured for a long time, ostracism leaves people feeling depressed and worthless, resigned to loneliness or desperate for attention—in extreme cases, suicidal or homicidal.”

Bullying is a social pain. Eisenberger (2012) states “ the painful feelings associated with social disconnection -rely on same neurobiological substrates that underlie experiences of physical pain. Liberman (2013) “Social neuroscience reveals that our need to connect with other people is even more basic than our need for food or shelter. Social connection is essential for survival. Our brains react to social pain & pleasure as they do for physical pain and pleasure. Social rejection/humiliation causes social pain.” 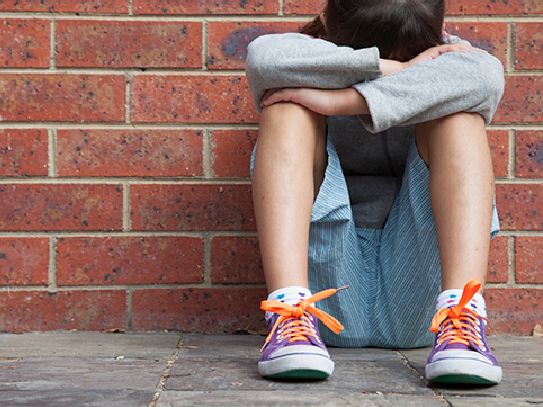 Prior to the publication of the DSM V, (2009) I assumed that child experts worldwide would promote the dangers of school bullying. But nobody did! The DSM V only mentions discord with peers! I don’t know who sent in research about workplace bullying, but I did. Thus I was thrilled to see humiliation, ostracism and bullying included, although school bullying wasn’t! Apparently the DSM V is less than accurate and child therapists need to investigate further.

“I don’t believe bullying, per se is mentioned but the PTSD criteria clearly cover bullying when there is actual, or the threat of, harm to an individual.”

Six months ago I experienced what doctors described as a minor heart attack, but was given four stents! Although I recall the chest pressure, and a thought flashed through my mind that I could die in the street, I then decided that it was indigestion or hunger. I called the ambulance a few hours later! But it has taken over six months for me to acknowledge the event as possibly life-threatening. I am still not sure if it was!

The highly validated Breslau Scale for PTSD (1999) doesn’t use Criterion A, others argue that Criterion A could include less severe, but serious life events such as bullying. (Matthiesen & Einarsen 2004). Brewin et al.2009; Kraemer et al. 2009 ) Research by McPharlane (2009) demonstrates that Rater perception determines Criterion A, not victim’s experience!

Can school bullying be regarded as life threatening?

Joseph (2003) found that a third of bullied children suffered post-traumatic stress. Teicher (2010) found that bullying is associated with greater symptom ratings and meaningful alterations in brain structure. Research into identical twins, some of whom were bullied, expose epigenetic differences between non-bullied and bullied twins to survive the bullying, Arseneault (2011) Idsoe (2012) and Moalem, (2014).

A meta-analysis by Nielson et al (2015) demonstrates that 57% of bullied victims report symptom scores for PTSD. The meta-analytical part of their study showed that exposure to bullying at work and school was significantly associated with posttraumatic stress symptoms.

The recent research into diagnosing and treating victims of Workplace Bullying Trauma (WBT) by the Therapist Special Interest Group, part of the International Association on Workplace Bullying and Harassment, (IAWBH) can be utilised towards developing a better understanding of school bullying trauma. WBT is identified by a constellation of symptoms including rumination, hypervigilance, paralysis, weight gain, sleep, gastrointestinal and skin disorders, concentration & social difficulties and personality change.

Numerous researchers such as Ziegler (2002), Van der Kolk, Weisaeth, & McFarlane, (2007) regard bullying as a possible cause of PTSD. According to Idsoe (2012) since “newer versions of the A1 criteria have emphasized perceived life threat, many bullied children would qualify under this criterion.” “Our findings support the idea that exposure to bullying is a potential risk factor for PTSD symptoms among students.” As bullying represents a relational trauma it can be more traumatic than other traumas, (Lancaster et al. 2009).

Therefore being humiliated and ostracised is life threatening! Evidence demonstrates that bullying can change a child’s life forever and alter their brain.

Thus I would like to propose that school bullying, like workplace bullying, may be life threatening and cause PTSD. If left untreated, it can traumatise the young person, alter their neurobiology, change their physical health and social well-being permanently.

Where to from here?

Although treating childhood bullying is simple if dealt with immediately, (2-6 sessions) when bullying symptoms persist into adulthood they become extremely difficult to treat. Thus we need evidence-based training for mental health professionals to take school bullying seriously. We also need to educate and empower children themselves to block bullies and prevent it occurring again, at school or later on.

Emily Anthes , Inside the bullied brain -The alarming neuroscience of taunting. Bostin Globe (2010)

Ernestine C. Briggs, Sarah A. Ostrowski, and John A. Fairbank

Journal of the American Academy of Child & Adolescent Psychiatry

The stressor Criterion A and PTSD:: A matter of opinion??

I Shalev, T E Moffitt, K Sugden, B Williams, R M Houts, A Danese, J Mill, L and A Caspi, Exposure to violence during childhood is associated with telomere erosion from 5 to 10 years of age: a longitudinal Study. Molecular Psychiatry 18, 576-581 (May 2013)

Mark A.. Schuster. Laura Bogart, Did the Ugly Duckling Have PTSD? Bullying, Its Effects, and the Role of Pediatricians, Pediatrics Vol. 131 No. 1 January 1, 2013

Vaillancourt T, Hymel S, McDougall P. The biological underpinnings of peer victimization: Understanding why and how the effects of bullying can last a lifetime. Theory into Practice. 52: 241-248 (2013).

The Biological Underpinnings of Peer Victimization: Understanding Why and How the Effects of Bullying Can Last a Lifetime Tracy Vaillancourt, Shelley Hymel & Patricia McDougall , 2013

This blog is the second part of a two-part serious on critical incident management to protect children.

Today we would like to share a practice that we use to encourage parents to become more present with their children.