This article was authored by Jeanette Miller, Senior Consultant
in the Parenting and Early Years Program at the Australian Childhood Foundation.

When it comes to child development, the nature/nurture debate no longer makes it to the podium. There’s broad acceptance now of the interplay between a child’s genetic inheritance and the environmental factors that affect that child’s growth and development… but the exciting science of epigenetics can now take discussion about child outcomes to another level.

In simple terms, we now know that environmental factors can change the way our genes function. And that those changes in gene expression can be passed on to the next generation.

The mechanics of this process revolve around the ‘epi’ in epigenetics…the latin root word implying that something is added to a gene, or is ‘on top of’ or ‘beside’ the gene. And that ‘something’, is an additional group of molecules called a methyl group. Methyl groups act like switches- switching genes on or off.

A whole range of environmental factors can trigger the formation of methyl group ‘switches’ on our genes- factors like diet, stress, and yes…..parenting!

One well-known epigenetic study of parenting in rats, used evidence that high-nurtured rats (those whose mothers licked them a lot as pups), have calm offspring, while low-nurtured rats produce more nervous 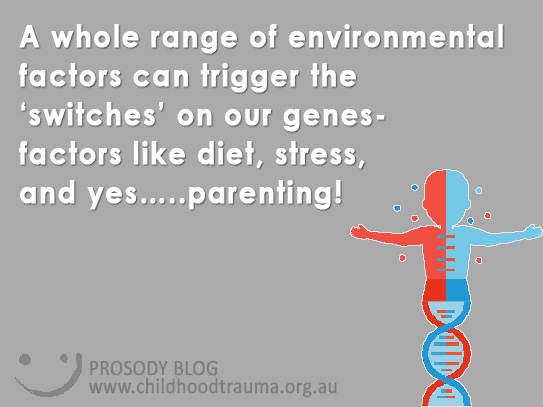 babies. The study involved ‘fostering out’ the calm pups to low-nurturing mothers, while the more stressed pups were given to the high-nurturing mother rats. You guessed it! The baby rats’ stress levels changed to become more like that of their foster parents than of their biological parents.

How tempting it would be to translate those findings into the human context so that we could definitively say that abused children who are then cared for by nurturing foster parents, will not only thrive, but will pass on nurturing parenting styles to their own children in the future!

Clearly though, we are not rats, and neither can we ethically conduct controlled trials like that one, on human parents and their children, but there are some interesting human epigenetic studies using data collected from real life.

One such study by Radtke and colleagues, looked at long term effects on the unborn children of pregnant mothers who were subjected to partner violence. There were no genetic changes in the mothers, but there was genetic methylation in the babies born to those women. The particular genes affected are those involved in the stress response, and those children continue to have dysregulated stress response systems into adolescence. Toxic stress in pregnancy has the potential to affect children for generations to come.

Surely these findings point to the high priority we should be placing on providing support and preventative interventions to ‘at-risk’ pregnant women.

Check out “Genetic Science Learning Center, from the University of Utah” to see how you rate as a rat mother!

‘Why it’s essential for therapeutic care specialists to practice self-care’ blog article was written by Jessica Wright, Therapeutic Specialist at Australian Childhood Foundation.   We have heard a hundred times over (probably more) in the past few years that self-care is essential to ensure we can keep going. In my work as a Therapeutic Care …

The Victorian State Government has recently introduced into the Parliament The Child Wellbeing and Safety Amendment (Oversight and Enforcement of Child Safe Standards) Bill 2016.  What do you need to know?