Preventable Violence – Is engaging fathers the solution to creating a safer society? Part 2

Therapist and author, Timothy O’Leary, delves into the psyche of men who use violence, to reveal how engaging fathers can help to create a safer society. This is Part 2 on the topic. You can read Part 1 here.

To stop violence, we must equip all men with the four non-violence gates, as well as helping men to understand and heal the predatory-part of him that drives his violence. Without the four gates of 1., Self-control, 2., Respect of the law, 3., Empathy and 4. Knowing how to use better tools (as discussed in Part 1 of this post), a violent impulse simply runs right through to its victim.

Discussions about alcohol, drugs or a short-fuse, are only a smokescreen for the part of the man that drives his violence. If his four gates are not closed-off against violence, then alcohol and drug use will serve to further disinhibit his aggressive impulses.

One of the problems about behaviour-change approaches is that it is hard to identify and measure change. The man may recognise his need to change, or proclaim that he is changing, but how are those around him to trust this?

The four gates bring something tangible and measureable. For example, you are either increasing your ability for self-control, and feeling positive about your success, or you are not. In regards to gate two, you either respect the law or you don’t. Or you have learnt to identify your pro-offending beliefs that were previously used to justify violence and by-pass the laws, or not. This is helpful, not just for the man and his partner, but also for caseworkers, therapists and the judicial system. 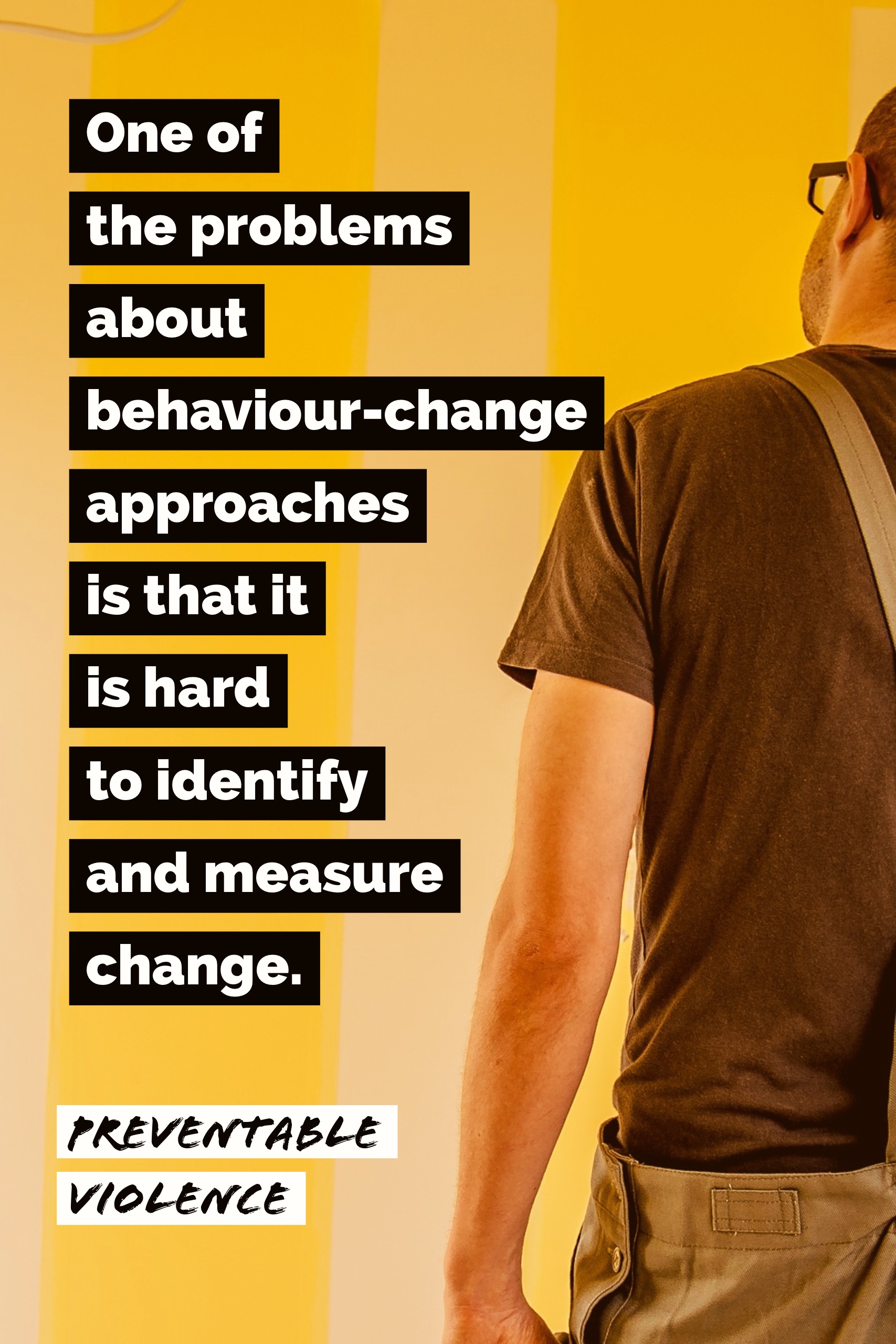 For some men, it is initially the fear of legal sanctions that drives their change, meaning that their use of self-control is not driven by a respect for the law or victim-empathy, but fear of punishment within the judicial system. As long as these gates hold strong, then it still equates to keeping others safe from his potential violence and is a place to begin. It underlines the need for strong legal sanctions against violence.

There is currently unprecedented political and community will in Victoria to drive change to tackle violence in our community. Here in Victoria, the government has committed significant resources to implement a 10 year plan, designed to meet the 227 recommendations handed down in the Royal Commission into Family Violence12.

Decades of research7 into fatherhood shows that fathers hold the key to a safer society. When fathers are positively involved with their children, their kids tend to have better mental health, higher educational results and positive relationships with peers. Positive fatherhood is associated with reduced involvement with Juvenile Justice, less reliance on aggressive conflict resolution, greater problem-solving skills and greater empathy and moral decision-making. All of these benefits make for a safer world.

On the other hand, when dads use violence or are absent, children tend to perform at a lower academic standard and are far more likely to respond to schoolyard conflicts with aggression.

When men are more secure in their sense of masculinity, they are less reliant upon rigid gender stereotyping. This is important, because rates of violence are higher among men who rigidly adhere to traditional ‘gender-codes’3.

Positive fathers model healthy masculinities and healthy couple-behaviours that are adopted by their children. When Children experience love, affection, and appropriate limit-setting, they internalise both a sense of self-worth and self-regulatory capacities. All of these benefits point towards the need to help dads to get off to a great start to fatherhood. Research5 also shows that dads who bond with their babies stay bonded, implying that we can achieve lasting results from targeted policies for new dads.

Australia already has some amazing programs for dads with skillful and committed staff dedicated to helping men adopt positive parenting skills but they need more funds to broaden their impact.

Violence costs our society dearly, in both dollar terms, and pain and suffering. I believe that a safer society really is just four gates away. We must however run early-intervention programs in kindergartens and schools that promote self-regulation, empathy, ethics and problem-solving when their brains are primed for acquiring these capacities. 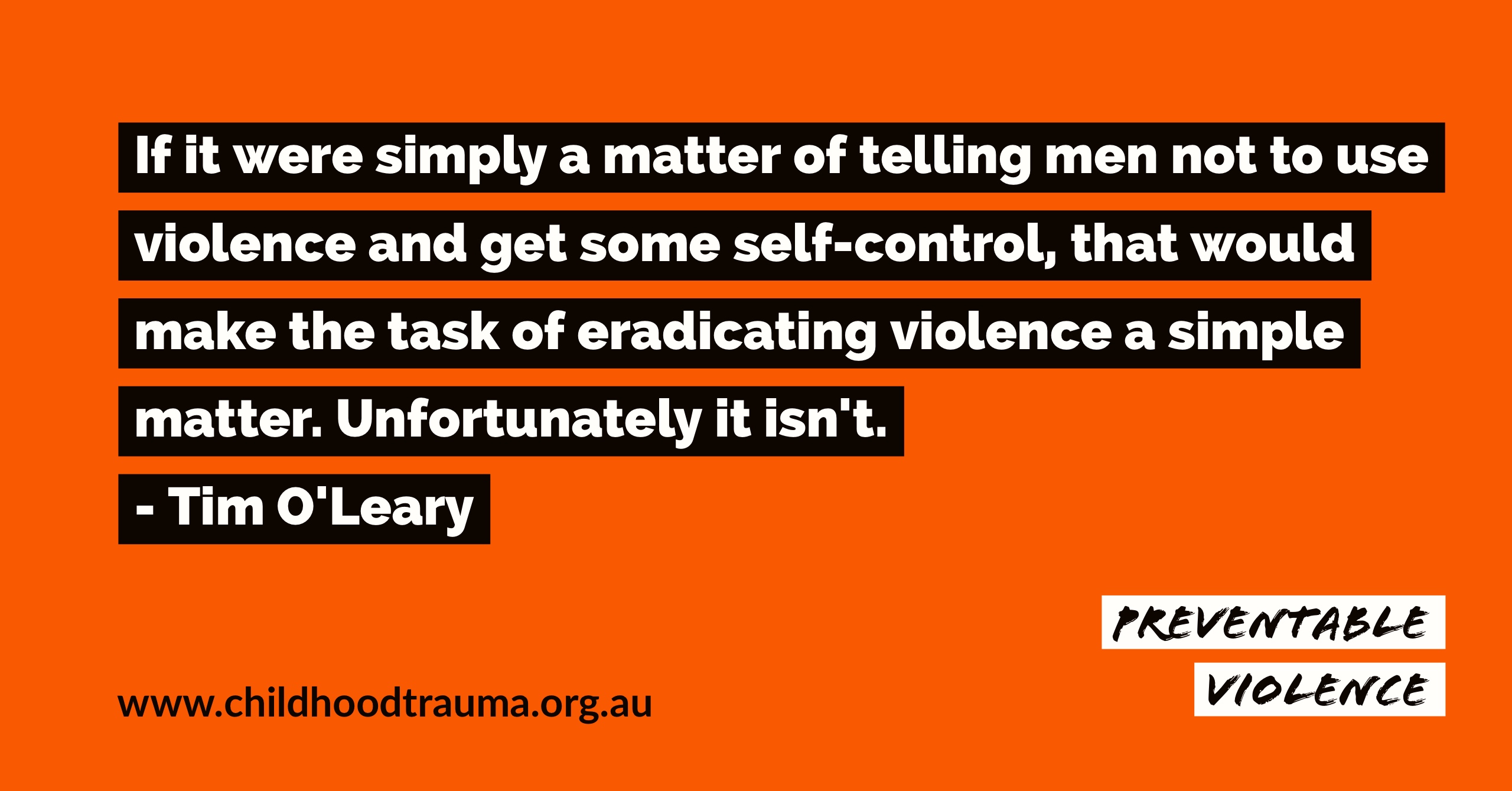 The earlier we start towards this goal, the better society we will create. If it were simply a matter of telling men not to use violence and get some self-control, that would make the task of eradicating violence a simple matter.

Unfortunately, the neurological mechanisms of self-control do not permit this to be so simple. The work of Dr Allan Schore and Dr Bruce Perry shows that aggressive impulses need to be co-regulated by attuned parents in order for the child to internalize self-regulatory capacities.

At-risk infants and toddlers can show anger as a protest against insecure attachment but this can be unfortunately misinterpreted by the unprepared parents, who all too often react with hostility, which overwhelms the child, producing excessive and toxic levels of stress hormones.

These children now have two problems when it comes to self-regulation. Not only have they have not internalised the necessary capacities for self-control, the sub-cortical regions of their brains tend to be unstable and highly-reactive, compared to children raised in a healthy-environment. The smartest part of their brain, the neo-cortex, has to work doubly hard to try to regulate the impulses from the lower brain.

Try as they might, theirs is an uphill battle as the sub-cortical ‘load’ that they are trying to manage is just too strong for their under-developed neo-cortex. These children tend to need somatosensory interventions that help to increase dopamine levels in their brain that helps to regulate the lower brain and restore the neo-cortex.

Throughout their lives, these boys are troubled by feelings of pain, fear and insecurity, that do not sit comfortably with their definition of manhood, limiting reflection and help-seeking behaviours. This leaves the pathway to substance abuse wide-open, further isolating them and undermining the development of the four gates.

We need early education staff trained to identify and therapeutically respond to children with poor self-regulation and social skills, and assist the parents to reach these children to build skills in managing their aggression in pro-social ways.

This kind of intervention has urgency about its timing, as the child’s brain development is in full-swing at this time. Once this window passes, it’s so much harder for children to learn self-regulation and social skills.

We also need to acknowledge that hostile mothering tends to produce aggressive boys3. This should not be seen as ‘mother-blaming’ as many of these women come from abusive backgrounds, and the anger they feel at the men who abused them is often unfortunately transferred onto their sons.

We need to help these mums to keep hostility out of their parenting, so that their sons can learn to respect and trust women from the get-go. This means tackling issues such as social-exclusion and poverty as well as equipping them with the four gates. Research findings also indicate that when a father is positively involved, the quality of a mother’s parenting improves, as she is less dysregulated, more patient and better able to respond to her child.

When I worked in the Peek A-BooTM program for mothers and infants after family violence, we were able to engage mothers and infants to support them in their parenting and to help them to process their trauma. This program had just begun to engage men who used violence, when it’s funding ended. I believe that it’s these therapeutic early-intervention programs that have the ability to foster connectedness, guide parents to use better parenting strategies and give voice to trauma that offers us hope for deep and lasting change for those affected by violence.

Violence costs our society dearly, in both dollar terms, as well as pain and suffering. In stopping intergenerational violence and relational trauma we can draw from Tom Meagher, who wrote that, “Since Jill died, I wake up every day and read a quote by Maya Angelou – “History, despite its wrenching pain, cannot be unlived, but if faced with courage, need not be lived again.”

Let’s ensure that when the next generation will be equipped with the four ‘gates’ that will enable them to use problem-solving instead of violence.

It will be better for them, their families and society.

This is an expanded version of Tim’s presentation at the 2016 International Childhood Trauma Conference in Melbourne.

3. Tom Meagher’s essay on the Irish White Ribbon website, “The Danger of the Monster Myth”, retrieved from https://whiteribbonblog.com/2014/04/17/the-danger-of-the-monster-myth/

5. Fonagy, P. (2008) in Early life and the prevention of violence in Campher, R (ed): Violence in Children: Understanding and Helping Those Who Harm. London, Karnac.

6. John Medina (2014) Brain Rules for Baby (Updated and Expanded): How to Raise a Smart and Happy Child from Zero to Five, Pear Press:Seattle.

Guest blogger, registered psychologist and school counsellor Deborah Costa shares her own model for working with schools to realise the possibilities they can provide for traumatised students.

The Social Synapse – The fusion of brain and relationship

This blog post was written by Dr. Joe Tucci, CEO at The Australian Childhood Foundation. “…When we interact, we are impacting each other’s internal biological state and influencing the long term construction of each other’s brains. This, in essence, is how loves becomes flesh… ” Lou Cozolino, The Neuroscience of Human Relationships (2013) Lou Cozolino …