Everyone knows that children do best when they are supported, nurtured and loved. Dr Joe Tucci explores how lessons learnt from the remarkable rescue of young William Callaghan can help us all understand and support children who live with threat and violence in their homes. Joe advocates that raising the age of criminal responsibility in Australia is one way to ensure that children who experience trauma can also experience the support they need from a community who loves them.

This article was written by Dr Joe Tucci, CEO of the Australian Childhood Foundation

A few weeks ago, a remarkable story unfolded. A young boy with autism went missing in the Victorian bush. The state held its collective breath for three days before there was good news.

The volunteers and police who found young William Callaghan put themselves into his shoes to do it. They knew that he was more vulnerable – and special. He liked to run. He liked fetta cheese. He liked the smell of bacon and onion on the BBQ. He liked peanut butter. He loved Thomas the Tank. The volunteers were told to approach him slowly and offer him food first. They were told to be quiet and not startle him. They adapted their normal way of looking for a missing person to accommodate William’s special needs. 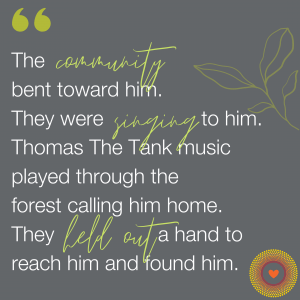 The community bent toward him. They were singing to him. Thomas The Tank music played through the forest calling him home.

They held out a hand to reach him and found him.

However, there are plenty of children that are vulnerable that we leave to fend for themselves. They are the children who are forced to live with threat and violence every day at home.

Their vulnerability is not so visible. But it is still there. Their trauma runs deep. It has eaten away at their self-confidence. It has stopped them from trusting people. Their violation is always there. It runs loose in their minds. They are worried and scared. They feel alone. They feel like somehow the violence was their fault.

The effects of this violence sometimes make it impossible for them to listen. Their attention is constantly on what is happening around them – ready to run, ready to fight, ready to protect themselves from danger in any way they can. They find it hard to learn new information. They look like they do not care. They look like they want nothing to do with people who are trying to look after them.

Their trauma often bursts out in their behaviour. Often, these are the kids who miss school, break into your car and spray graffiti onto your walls. They are the young people who swear in public and at the police. Sometimes, they carry knives. They use drugs. They jump other kids who are their way home, minding their own business. They sleep on the streets.

They hurt themselves. They use lighters to burn their arms because the pain on the inside from their violation is too much for them to bear. At least, they can see the burn on their arm. They can feel it. It is real.

Recently, the Victorian Sentencing Advisory Council found that 78% of children who were charged with youth crime were reported to have been abused or neglected at least five times over the course of their life. Half of them had lived in five or more different placements as a result of being removed from their family in order to ensure that they were not abused again. Some of them were exploited for sex. Many of them had attempted suicide.

The most telling result was that the children whose abuse started before they were two years old were more likely to have been charged and sentenced with a youth crime by the age of 13. These children are the most troubled and the hardest to reach.

They are the children who should not be charged with a crime until they are at least 14 years old. It is why the concerted campaign (raisetheage.org.au) to raise the minimum age of criminal responsibility needs to be listened to by governments. They are children. They are our children.

They look tough on the outside, but they aren’t really. They have to do all of this to defend themselves from the threat they feel inside them and all around them all the time. They are small. They feel small. They feel alone. They have never had anyone stand up and give a trembling, heartfelt plea urging the community to help them. They have not felt like anyone is on their side or standing in their corner.

No one has ever approached them with chocolate to keep them safe. When they have been offered something they desperately need, it was only so they can be exploited and used.

They need our help. They need us to bend towards them and make them feel like we will turn out in the hundreds to look for them and take care of them.

They need us to sing their favourite music so that they feel safe to ask for help. They need us to accept them for who they are, understanding their vulnerabilities are not their fault.

We all cried when William was found. It was a relief. A young boy who had been in danger had been saved. We made it as easy as possible for him to find his way out. We coaxed him back out of danger.

It is exactly what traumatised children need too. They need a community that is open to finding them and bringing them back to us so that they are safe.

This article was written by Lauren Thomas, Program Manager – Service Development and Projects at the Australian Childhood Foundation. In December it will be 30 years since Australia ratified the United Nations Charter for the Rights of Children (UNCRC). For thirty years we have agreed – along with almost every other nation in the world now – …

Children’s Week – Students share their artworks to communicate the message of Children’s Rights.

This week is Children's Week - celebrating the rights of all children to enjoy childhood.  In this entry we have selected a shortlist of artworks submitted to us by young people in Victoria.  Each artwork is accompanied with the artists own description of their work.

It is 30 years almost to the day that the Australian Childhood Foundation was first incorporated as an organisation, and here, Foundation CEO Dr Joe Tucci reflects on why we were first formed, what we have achieved, and what is yet to be done for children.