The legacy of Robin Clark

This article was authored by Noel Macnamara,
National Manager, Therapeutic Care at the Australian Childhood Foundation.

Recently, I was honoured to be invited to give the Robyn Clark Memorial Address. Robyn Clark provides an on-going inspiration for all who work to promote the rights of and the protection of children in Australia.

I was lucky enough to have seen Robin in action. Back in the early 1990’s she would give the opening address for the new child protection worker induction programs. What she said to the new CP workers has stayed with me. Typically Robin spoke about her support of practitioners and her willingness to defend them, where they had done their best. However, that she would never, ever defend or support them where they have not respected children, young people and their families and carers. I remember her asking one group why they had become CP workers. One young man replied “early promotion”. Robin rounded on him and told him in no uncertain terms that he had made the wrong choice and that the children deserved people who were committed.

I have come to see what she said and what she demonstrated as a form of robust compassion built on the rights of children.

Children in general and the children in the Out of Home Care system (OoHC), in particular, have no voice in mainstream society. Children hold little power in our political processes. They are rarely consulted in a meaningful way about decisions that will affect their lives. The relative powerlessness of children makes the protection of their rights all the more important.

We are acutely aware of what children must be protected from: for example trauma, abuse and neglect. However, realising a world in which every child reaches their full potential requires more than ensuring these kinds of basic protections. It requires concrete actions to ensure that we live up to our positive obligation to ensure respect for every child’s fundamental human rights.

Nearly twenty five years ago, Australia signed and ratified the United Nations Convention on the Rights of the Child. While much has been achieved in the protection and promotion of children’s rights since 1990, there are still many children in Australia who do not fully enjoy their human rights.

The guiding principle is set out in article 6 of the Convention: the right to survival and development.

In many areas we can be proud of what we have achieved. Most children in Australia have what they need for healthy development, to thrive and to flourish.

However in the OoHC systems we still have a way to go to adequately protect the fundamental human right to survival and development. If we are to meet our obligation to ensure the right to development to the maximum extent possible, we MUST invest more in the outcomes for these children.

Children’s rights are not abstract or aspirational. They are grounded firmly in the basic human needs for life, growth and development. 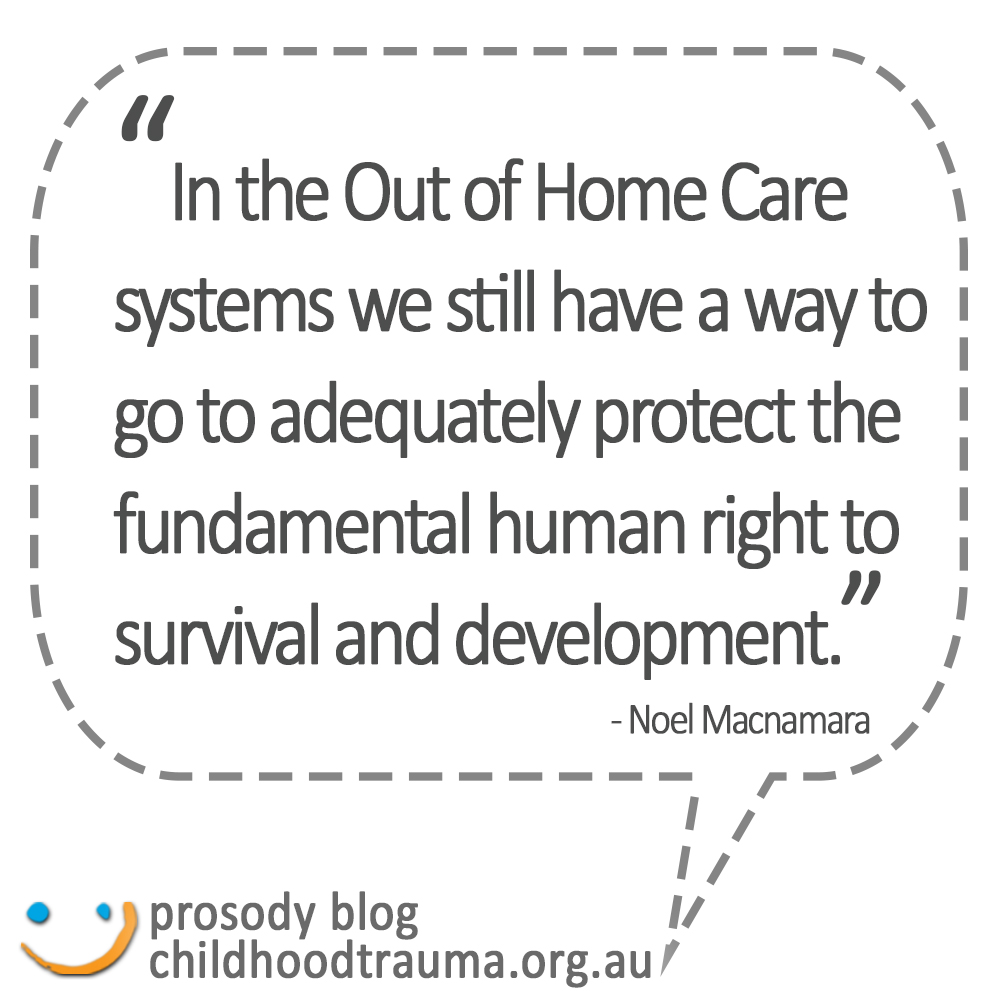 For children in the Out of Home Care system, the process of being removed from family means they have been subject to abuse. It disrupts relationships, schooling, family life, healthcare, social networks and feelings of confidence and physical and emotional stability. They may also experience adverse outcomes as adults. The fact that there are a significant numbers of children graduating from the child protection system into homelessness, early pregnancy, involvement with the criminal justice system and adult mental health services indicates fundamental problems in these systems of care.

A human rights framework recognises not simply a need for, but also an entitlement to, the best possible life chance for all children.

I recognise that the Victorian Government has made responding to the needs of children in the OoHC system a priority and would hope that these efforts to respond to this pressing need are extended and continued.

Research shows that the impacts of even severe early trauma can be resolved, and its negative intergenerational effects can be intercepted.

Children can and do recover well. For this to occur the OoHC system must reflect and implement the current research insights.

We all have the obligation to respect, promote and protect the rights of children in the OoHC system. We must be both compassionate and robust in our defence of these children’s right to access to a good life.

In some ways: Robin Clarke’s philosophy might be summed up in the old African proverb:

“If you think you’re too small to make a difference, try sleeping in a room with a mosquito.”

Together we can and must make a difference and create an OoHC environment in which all children are able to flourish and thrive and reach their full potential, whatever that might be. This would be a system that Robin would be proud of.

‘Using Therapeutic Tools – Grounding young people through culture’ blog article was narrated by Liam Flanagan, Aboriginal Liaison Support Worker in the Back on Track Program, and written by Lillian Lampton, Aboriginal Liaison Support Worker, who are both in the Therapeutic Services Northern Territory team, at the Australian Childhood Foundation.   This blog illustrates the …