This article was authored by Marina Dickson,
Program Manager, Vocational Training and Education at the Australian Childhood Foundation.

Many of our members of the Prosody community will have read Norman Doidge’s book, ‘The brain that changes itself’ (2007). It introduced many ideas and concepts from the body of evidence of neuroplasticity to the world- given it was a bestseller long after its release.

Norman Doidge has recently released his next book, ‘The brain’s way of healing’ and it is timely to provide a review of this text. 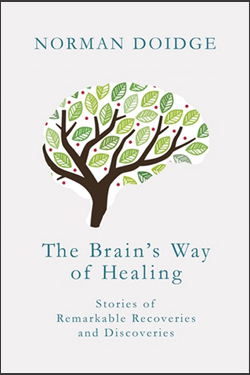 In this book, Doidge focuses on what neuroplasticity can teach us about healing and repair. His focus is on a range of illnesses, from Parkinson’s to Multiple Sclerosis to Autism Spectrum Disorder. For those of us working in any way from a trauma informed perspective, these stories of hope and repair provide some cues and guides to what might influence our practice- whether it is in medicine or even social work, psychology or other non-medical disciplines.

The main tenet of Doidge’s model is what he calls ‘the stages of neuroplastic healing’ (p. 101) and I attempt here to summarise this model, albeit from my perspective as a social worker and trainer.

Firstly, Doidge suggests that good health and nutrition are very helpful in supporting the healthy development of the parts of the brain associated with the ‘blood-brain barrier’- keeping the brain free from unhealthy invaders. He then moves into the four stages associated with directly ‘rewiring’ the brain.

As Doidge reiterates, these stages form a flexible framework rather than a staged and rigid set of steps.

He also points out that these are underpinned by 3 critical brain processes- often linked to brains struggling to integrate their functioning. These are ‘the pervasiveness of learned non-use’ (p. 102), ‘the noisy brain and brain dysrhythmias’ (p.103) and ‘the rapid ongoing formation of neuronal assemblies’ (p.105)

The final chapter is of particular interest to the Prosody community as it discusses the use of sound, particularly the use of music, in reparative activities with children. It also references the work of Stephen Porges who is currently partnering with the Australian Childhood Foundation in undertaking his listening based therapy with children in Australia who have experienced abuse related trauma. 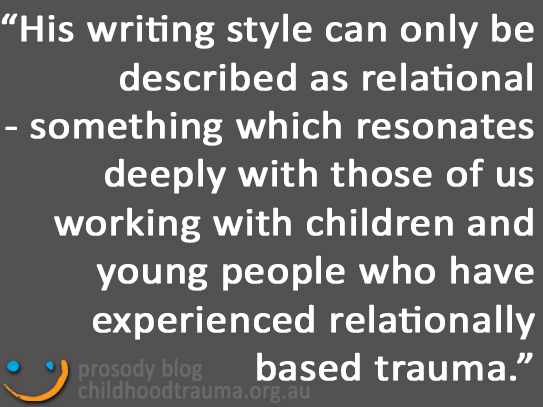 While the content of Doidge’s book is both fascinating and relevant, comment must also be made of the style in which he presents this information to us. His writing style can only be described as relational- something which resonates deeply with those of us working with children and young people who have experienced relationally based trauma. Not only do we hear about the medical breakthroughs and scientific grounding of these new ways of using the knowledge of neuroplasticity but we also hear the stories of the people making these changes to practice as well as the clients they work with and support. This heartfelt and genuine approach connects the reader with what could be a disconnecting and overly technical bombardment of theory in a way that makes the book both an interesting and engaging read.

However, for those who are looking for depth of theory and research, the extensive notes and references section (pp. 368 – 394) and index provide a veritable bookcase of further reading and knowledge building opportunities.

This resource is a strong addition to the knowledge of neuroplasticity and will certainly be included and integrated into the work of the Australian Childhood Foundation including the Graduate Certificate in Developmental Trauma. It is perhaps no surprise to hear that I recommend this book for those wishing to extend their knowledge and challenge their thinking.

Doidge, N (2015) The brain’s way of healing: remarkable discoveries and recoveries from the frontiers of neuroplasticity. Scribe Publications: Victoria

This ‘Heal Country’ blog article was written by Catherine Dennis, Aboriginal Kamilaroi woman and Therapeutic Specialist, at the Australian Childhood Foundation.   Heal Country is such a powerful statement.  I feel that everyone has their way of healing, country is inherent to our identity. Our Aboriginal culture is valued to our mob, and we care about …

In the leadup to the 2019 International Speaker Tour, we asked Jennifer Freyd the following five questions, hoping to gain some insight into the people, places, and experiences that helped shape her and her professional journey. 1. What was a pivotal experience (the “spark”) that started you off in your research and/or practice:   I …

This ‘Post pandemic kindness’ blog article was written by Pat Jewell, Program Manager in the Parenting and Early Years team, at Australian Childhood Foundation.   For most people across the world Covid-19 provided an opportunity to concentrate and focus on what is really important to us. As our world shrunk we had the opportunity to …