The story of James

This article was authored by Noel MacNamara,
National Manager, Therapeutic Care at the Australian Childhood Foundation

On the 8th of March 2015 James (name changed) turned 18 years old. He was surrounded by family and friends. There were presents, speeches, laughter and many stories. James basked in the warmth and love of those who saw a young man with his whole life in front of him. He is currently undertaking his year 12 at a private school in Geelong. He has expressed the hope to attend Deakin University to study psychology next year.

Six years previously it was a very different story. When we first met James he was living in a residential unit on his own because his behaviour was extremely disruptive and violent. He was aggressive and threatening to staff and all the possible dangerous items in the unit were locked up. He had not properly attended school for a number of years. He had multiple diagnostic labels and he was medicated to enable him to sleep. He had never had a friend and had never been invited to a birthday party. He had very limited contact with family members. His father was a habitual criminal and his mother a drug addict.

The last six years have seen a remarkable change in James and his life. When we first met it was clear that he was a suspicious, scared and lonely boy, who acted rather than planned, demonstrated his fear through his hypervigilance and lack of trust in the adult world. His energies were directed at defence and this left very little space in his life for healthy relationships, fun or learning.

James’s carer and the Care Team around him rode the waves created by his past and the traumatic experiences he had survived. It became clear to us all that the delayed response was often more powerful than the immediate; that the casual word could penetrate and germinate whereas the direct confrontation would meet resistance on the hard surface and bounce back again. We came to understand that time was needed for thawing, warming, weaning, loosening, healing, disarming only a consistently therapeutic relationship over a long period could be of any help. 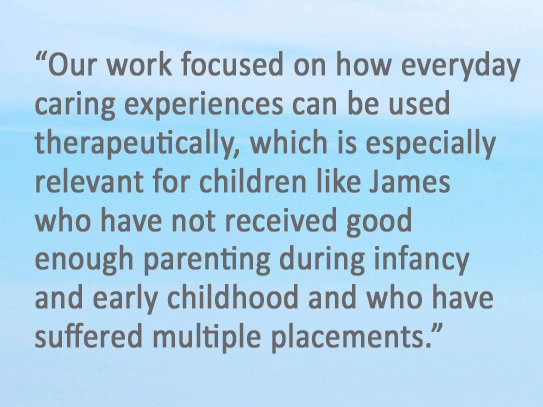 We recognised that if we were to be able to help James to let go of his compulsive patterns and reactions that this would be by a paradoxical approach which surprised, even shocked, and forced him to ask himself questions. Whereas on arrival James knew what reaction to expect to his own rebellious and antisocial behaviour, he was constantly startled and bewildered by what some have called the ‘ counter intuitive’ , therapeutic approach, so unexpected by him as to disturb quite deeply the fixed patterns formerly ingrained in his understanding of being cared for and relationships.

Our work focused on how everyday caring experiences can be used therapeutically, which is especially relevant for children like James who have not received good enough parenting during infancy and early childhood and who have suffered multiple placements. A lot of therapeutic care is opportunistic, being ready to respond whenever the child feels less defensive, e.g., a child might start to communicate at a deeper level during a car journey or at bedtime or while helping in the kitchen or during a walk.

It was in this context that James disclosed that he had been sexually abused by a relative at a much younger age. The waves grew larger and crashed to the shore more strongly. As we came through this period James revealed he had also been sexually abused in residential care in the year before coming into therapeutic foster care. So many things became clear as we began to truly understand the journey this boy had travelled. Not sleeping, hitting first and asking second, self-protection from all relationships and the lack of trust in others were his tools for survival. James was overwhelmed by emotions. Many times he could not use the thinking parts of his brain. He was constantly hijacked by his limbic.

Through the commitment of the carer and the support of the Care Team around both James and his carer he has been able to move from patterns of behaviour that provided protection but prevented him from connection.

During his time with us James went to his first birthday party, learnt to play chess and competed in his year 7 chess competition; represented his school at hockey; reconnected with family members; went on school camps for the first time and became able to believe in himself and the adults around him.

Our work and the carers dedication has helped James to feel he was held in a healing relationship and this enabled him to be able to think and as a consequence, to be released from the tyranny of feelings. Being able to use his head and heart together has enabled him to have access to a fuller life and richer relationships.

The Importance of Play for Therapeutic Professionals

‘Importance of Play for Therapeutic Professionals’ blog article was written by Tayla Howard, Team Leader, OurSPACE program at Australian Childhood Foundation. As a Play Therapist, I am always advocating the importance of play in all our lives, in the lives of children, adolescents and adults. Play may look different across the lifespan, but ultimately play …

Preventable Violence – Is engaging fathers the solution to creating a safer society? Part 2

Author and Therapist, Timothy O'Leary continues his series looking into the psyche of men who use violence, to reveal how engaging fathers can help to create a safer society.

In today’s post, the third in our series on Child Centred Practice, we will look at what it means not only to listen to children but also to prioritise the voice of the child.