The term listen means to ‘make an effort to hear something, hear with attention (a) person speaking’ (Sykes, Concise Oxford Dictionary, 1983, p. 588). It is an active process involving hearing, understanding what has been heard and responding. Translating this into professional practice with children who have been abused can be challenging. For example, how does one respond to a child who has clearly disclosed abuse by a parent, is not believed by the non-offending parent, does not feel safe in the family home, yet wishes to return home? This is not an uncommon example that many professionals involved with children from abusive and violent families have to confront.

In today’s post, the third in our series on Child Centred Practice, we will look at what it means not only to listen to children but also to prioritise the voice of the child. The topic has been an important one over my career, and was the central premise of my thesis and of a book Chris Goddard and I wrote and published, in 2006. ‘The Truth is Longer Than a Lie’ which sought to highlight children’s experiences of abuse and professional interventions. The quotes from children in this blog entry are also drawn from these.

For children, the child protection system is a particularly difficult one to navigate. It is complex as child abuse involves ‘both criminal and civil responsibilities’ which means that in practice various issues are dealt with by a range of different services and legislations (Plum, 2014, p. 182). This fact of multiple party involvements can mean that the voice of the child can easily get lost, forgotten or deprioritised.

Well, there was a whole range of agencies involved in this. Yeah, and between that time there’s probably been four or five counsellors and probably psychiatrists too… (17 year old female)

Listening to, prioritising the voice of and involving the child in decision making can therefore be very challenging for the child and the worker. Often it is a time when children are experiencing considerable uncertainty in their lives having been removed from their homes and families. They may not be able to express the conflicting feelings they may be experiencing and may struggle to find the words to fully describe 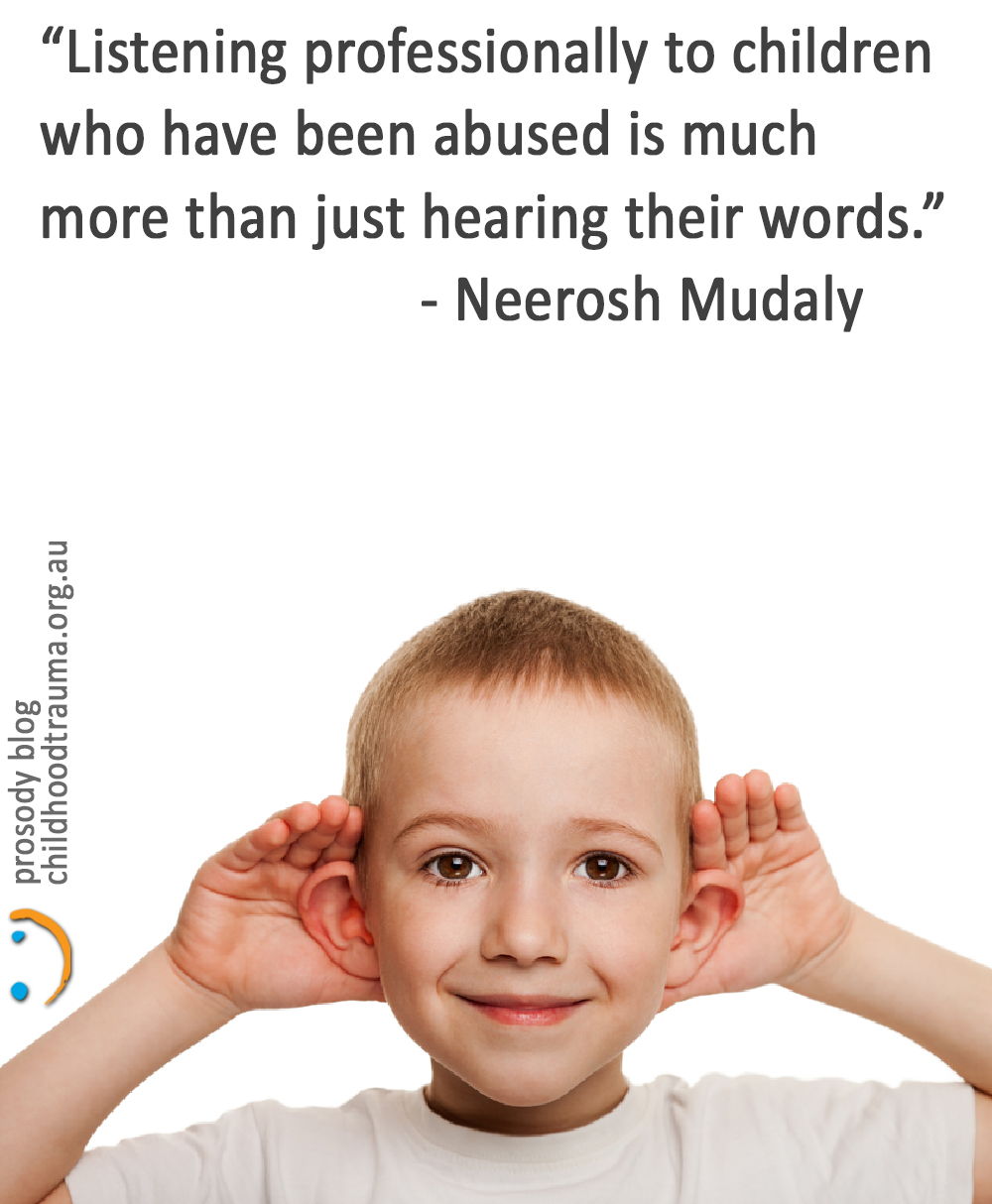 the events that have hurt them. They may have a range of negative feelings such as guilt about their disclosure of abuse or their confused feelings of love and resentment for a parent who has abused them. Such complex emotions may be difficult even for adults to verbalise.

Listening professionally to children who have been abused is therefore much more than just hearing their words.

Children’s participation: the foundation of listening to them

The concept of children’s participation is now deeply embedded in notions of promoting children’s rights, and in particular, their right to be heard. There is much current literature and research on children’s participation and the importance of consulting them on matters of practice and policy making (see, for example, Sinclair, 2004; Tisdall & Davis, 2004; Littlechild, 2000).

To promote real participation by children, however, one must provide real opportunities for them to express their views by addressing their doubts, confusions and fears that may impede their participation. (Lansdown, 1994, p. 38-39). It requires ‘addressing attitudinal barriers, (and) creating more participatory structures and processes …’ (Sinclair, 2004, p. 114).

Opportunities for children and young people to be heard in child protection processes should include ‘developing skills which make the young person feel that their views are being heard and respected’ (Littlechild, 2000, p. 412).

. … It was a pretty freaky time and really horrible at the time, but I’d have to say they were pretty fantastic. I think because of the fact that I had a brilliant worker, and it was just great to have someone with my sort of wellbeing in mind. When I look back I’m amazed because I didn’t really give them anything to go on, I didn’t sort of reveal much to them at all about what dad did. But, um, they kept pursuing it and you know, they took me out of my home and put me somewhere safe, so I think it was pretty amazing. (17 year old female)

Children and young people should also be provided with full and clear information about the system that they will be part of and ‘practical details of who will support them and how’ (Littlechild, 2000, p. 412). Being cognizant of children’s anxieties and ensuring that interventions are sensitively implemented by all services and organisations that make up the child protection system is essential yet ‘implementation is not universally applied’ throughout the system (Plum, 2014, p. 200).

I was too scared. Because some coppers were interviewing me, doing an interview, but they were asking me really weird questions, like, did these, you know, how big was his penis? And that kind of shit. And you know, and they asked me to draw it, and I was young… (13 year old male)

Children who have been abused have to be ‘seen’ and ‘heard’. They must be involved in decision making. For this to happen, adults have to develop systems which facilitate children’s appropriate participation (Marshall, 1997, p. 103). This means using their competencies to promote their engagement in the process. It also 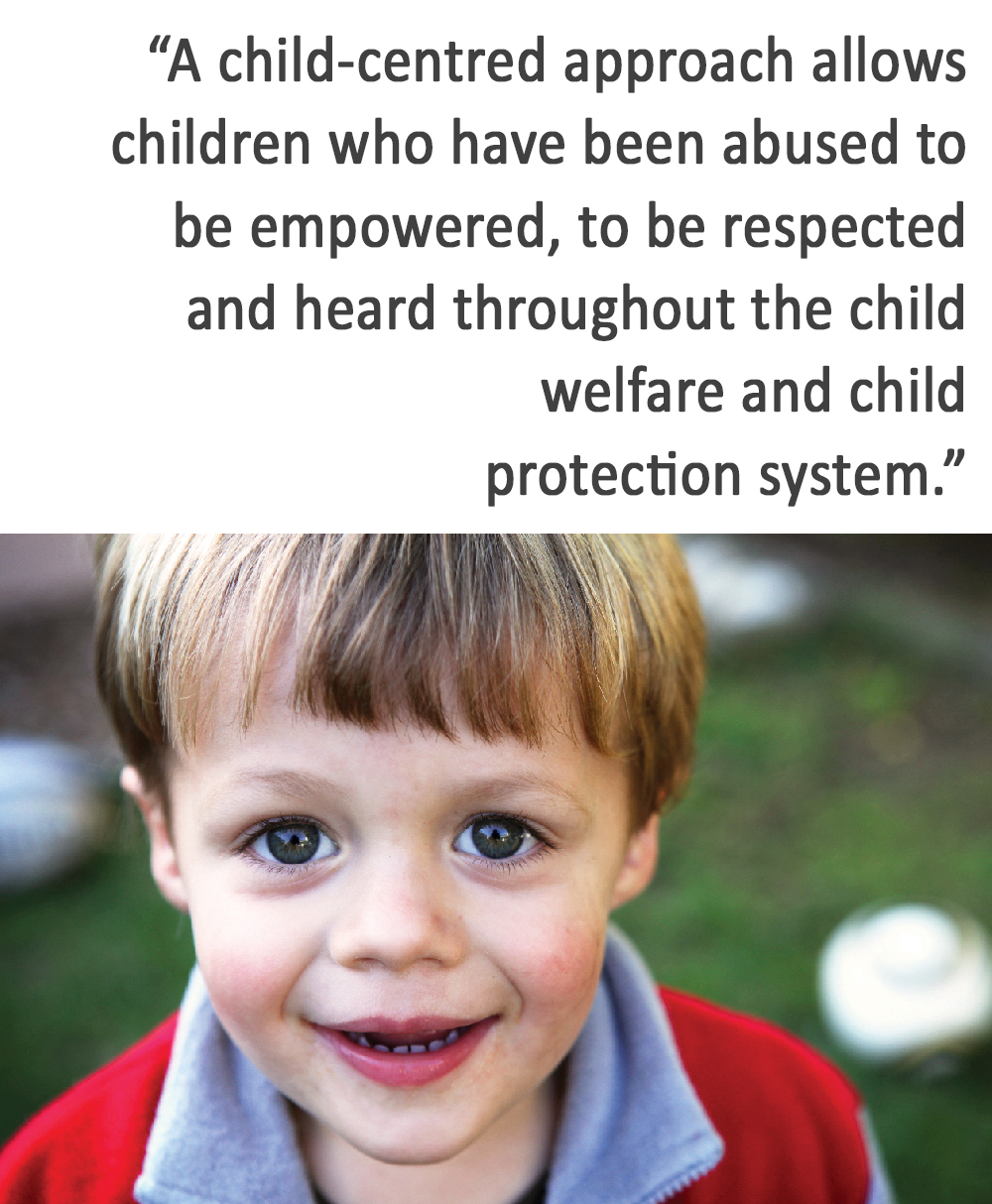 requires acknowledgement of their limitations, for example, being aware that children and young people may ‘not want the burden of deciding matters but do want their views to be taken into account’ (Littlechild, 2000, p. 408). ‘Being taken seriously’, declares Melton, simply means ‘having a say, being heard politely and having one’s perspective considered – in effect, being part of a conversation about matters of personal significance’ (2000, p. 143). It also means letting children know how their views will be considered, keeping them informed of outcomes of decisions and providing full reasons if decisions are negative and ensuring that they have access to effective and accessible avenues for their complaints (Lansdown, 1994, p. 38-39):

Developing a way of thinking about children, an attitude and a belief system that inherently values children, is a principle that must be shared by all adults. A child-centred approach allows children who have been abused to be empowered, to be respected and heard throughout the child welfare and child protection system. It keeps children central at all times, promotes their involvement in processes that affect them and incorporates features that are specific to childhood, and integral to children’s ways of experiencing their world:

(I was seen) Both times in the office, one was under, um, video camera and the other time was just on paper. The first time it wasn’t as scary because we were in a sort of brightly coloured room and there were all stuffed toys around. But the next time, there was this grey room with nothing there and it was harder to think. This wasn’t in the brightly coloured room for some reason because that was sort of a more happy sort of room … with a couch … with food and everything, that kind of thing. Sort of makes you feel more relaxed (11 year old female)

It is imperative that we are sensitive to children’s vulnerabilities and rights and take account of the issues that entrench adult authority and children’s powerlessness and silence. A truly child-centred approach keeps children’s rights, needs and welfare as the primary focus at all times and declares children are valued, heard and protected.

Mudaly, N. (2002). Listening to children who have been abused. What they tell about abuse and professional interventions. PhD thesis. Melbourne. Monash University.

Today is the beginning of National Reconciliation Week, which encourages us to reflect on our relationships with Aboriginal and Torres Strait Islander peoples as the First Peoples of this land and non-Indigenous peoples.

This blog was written by Hanif Reza Jaberipour, Senior Consultant in the Parenting and Early Years Program at the Australian Childhood Foundation. As a parent or professional, in living or working with children affected by trauma, the behaviour is what we see. It is behaviour that challenges us, shows us clues about what’s going on inside the child, and …