Why we use social media to support #notanotherchild

In an age where the general population has adopted with gusto the ever-expanding suite of social media platforms to share photos of everything from the lunch we’re eating, the anniversary we’re celebrating and,our favourite videos of kittens playing the piano, many not-for-profits are still fine-tuning efforts to use these media to create meaningful, lasting social change.

As individuals, we continue to adapt quickly and easily to the tools spawned by the rise of the Internet, such as Facebook, Twitter, Instagram, LinkedIn, Pinterest, Google+ and Youtube. However, learning to use them effectively as the voice of an organisation takes a lot more experimenting, discovery, failure and analysis – and it’s not as easy as you might think!

Journalism and telecommunications expert Clay Shirky tells us in his 2009 TED Talk ‘How Social Media Can Make History’ that there are only four periods in the last 500 years where media have changed enough to qualify for the label ‘revolution’.

The first was the printing press in the mid-1400s. The second was innovation in two-way communication: first the telegraph, then the telephone. Thirdly, about 150 years ago, there was a revolution in recorded media other than print: first photos, then recorded sound, then movies. And finally, about 100 years ago, with the capability to send sound and images through the air, came radio and television.

Media, he says, is now in the 21st century less and less about crafting a single message to be consumed by individuals. It is more and more often a way of creating an environment for convening and supporting groups.

At the Foundation, we love the possibilities that social media now opens up for us to raise awareness, understanding and prioritisation of the issue of child abuse. We agree that it’s not about us sending a message out into the world and that being the end of it. 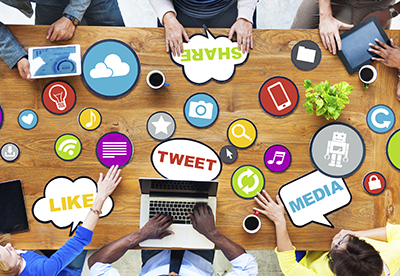 To us, it’s about sometimes starting conversation, but more often being a conduit for the conversations around the issue of child abuse that we believe need to be had for change to be created. Child abuse has been a difficult and uncomfortable issue for most people, and so for decades it has lurked in the shadows and not been given the kind of community prioritisation it needed for change to occur. But social media allows us to bring the issue out into the spotlight in ways that allow people to have whatever conversations they are comfortable with, and with whomever they are most comfortable discussing it.

We at the Foundation talk to our fans, likers, followers, true believers – those who already know us in some way – and they in turn share the messages among their own friends, colleagues and contacts, talking directly with each other and back to us, and out into further networks. As these conversations ripple out through the community, creating awareness and understanding as they travel, they reach the eyes and ears of passionate people who genuinely care about the issue and who have been waiting forever for us to find them, include them in the conversation and help them be a part of the action for change.

We’re working to connect people and ideas that can change our world; the people who can align large numbers of other people simply because they always wanted to connect and because we provided or used the means by which to help them do it. They will assemble other tribes, that assemble other tribes, that change the way we as a nation view the issue of child abuse and change the way we as individuals feel about our own power to make a difference. They will spread the ideas and the conversations that will gather momentum and grow to become something much bigger than our individual selves: our movement for change.

And so, we’re talking on Facebook and Twitter and Youtube and LinkedIn and through this very blogsite, and we’re telling stories that present the issue as we see it in its very many shapes and angles.

But we’re also listening. We love nothing better than to see a well-thought-out response, or an interested query, or a slew of ‘shares’, ‘likes’ or ‘favourites’ – not because it makes us feel popular or massages our ego, but because it shows that you’re listening, sharing our passion and talking to your own networks too.

Even disagreement or expression of anger is fine with us as long as it’s not defamatory, abusive, or a disclosure of very personal, private information – your opinion is your own and we absolutely respect that, as long as our own guidelines for online conduct are respected too (you can find them in the ‘About’ section of our Facebook page). Admittedly, we’ve been thrown a few curly ones from time to time; someone will voice an opinion that makes us pause and wonder whether it should remain in the public domain, or what kind of response to offer up. However, whenever and wherever possible, we want to remain committed to opening up conversation, rather than shutting it down, because that is what will bring the empowerment for change.

It’s exactly what Rosie Batty has done for the issue of domestic violence by speaking out, when most people expected her to retreat and mourn her terrible loss in silence. Because she was open enough and brave enough to begin a painful conversation, she has been surrounded by a wave of support that has reached the corridors of power and is creating change daily. It’s not that no one cared about family violence before; it’s that all those who did and do care finally found a forum in which they could express it in a meaningful way. After years of feeling alone and unheard, Rosie found her tribe.

So there is an ongoing process of learning for us, as with all things worthwhile. But it’s a process that fascinates and intrigues us and we are loving seeing debate, discussion and engagement that will help to bring the issue of child abuse into the community spotlight.

Chances are this article has come to your attention because you work with traumatised children in some capacity, but even pausing to read it says a lot about you as a person. It demonstrates that you take that work seriously and you want the best for the children you work with. It shows you’re passionate about prioritisation of children’s safety and protection. It shows you’re listening, you’re talking, and you’re part of our tribe.

If you would like to register to take the conversation further into your community and become a children’s campaigner, you can do so here: http://www.childhood.org.au/get-involved/support-our-campaign. We would love to hear from you.

Reflections on Day 5 of the 2018 International Childhood Trauma Conference

It is 30 years almost to the day that the Australian Childhood Foundation was first incorporated as an organisation, and here, Foundation CEO Dr Joe Tucci reflects on why we were first formed, what we have achieved, and what is yet to be done for children.

In Part 3 of our series on Children's Rights, Pat Jewell asks the question "Where are children under 5 years in the 1989 UNCRC?"