This blog article was authored by Melinda Tankard Reist. Melinda is best known for her work addressing sexualisation, objectification, harms of pornography, sexual exploitation, trafficking and violence against women. Co-founder of Collective Shout: for a world free of sexploitation. Melinda is also an ambassador for World Vision Australia, Compassion Australia and the Raise Foundation. She is named in the Who’s Who of Australian Women and the World Who’s Who of Women.

The school principal was perplexed.

I had just delivered a keynote on the impact of sexualisation and pornography exposure on children and young people at a conference of school leaders in NSW.

During the break she approached me, opened her phone and revealed an image created by a group of 5 year old boys, at the Catholic primary school she headed in Sydney. It showed two women, scantily dressed, in provocative poses.

The boys, along with fellow pupils, had been asked to prepare an in-class assignment using the pic collage app to make pictures. This is what the boys stood up and presented to the class.

One was so pleased with the work he inserted his face in between the woman’s bodies at breast height. These little boys didn’t think they’d done anything wrong.

This incident is just yet another outworking of the impact of a pornified world on our children.
Children being hurt. Children hurting others. 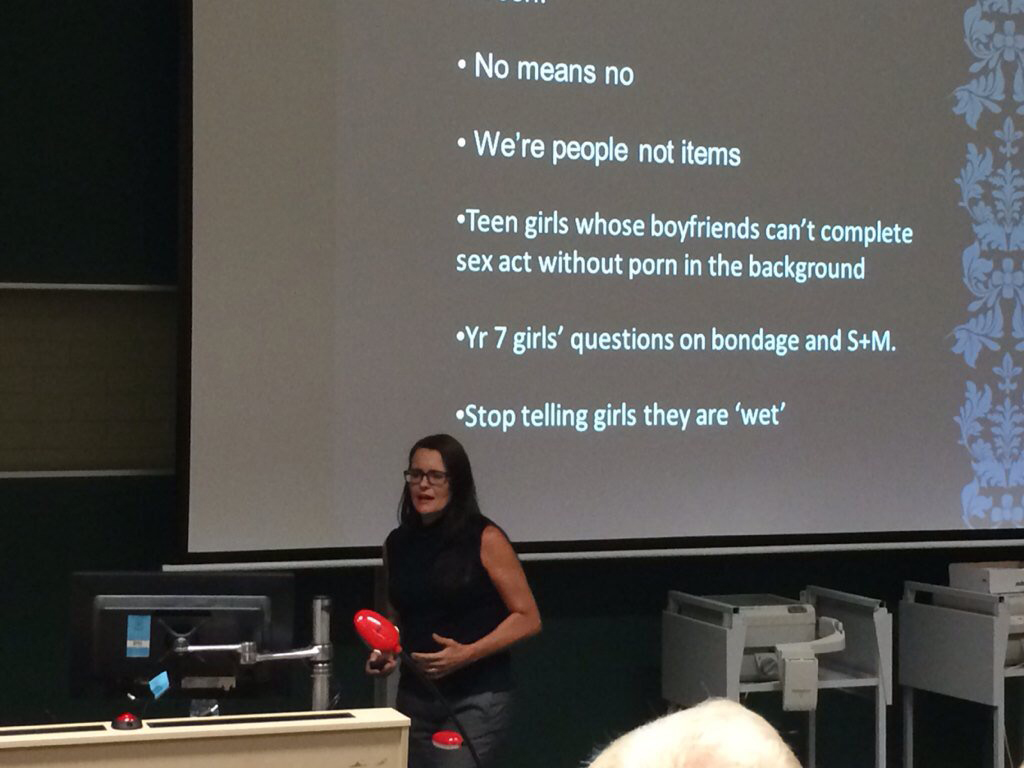 Educators, child welfare groups, childcare workers, mental health bodies medicos and parents are reeling. All are struggling to deal with the proliferation of hyper-sexualised imagery and its impacts on the most vulnerable – children whose sexuality is still under construction, children for whom pornography becomes a template for sexual activity, a ‘how to’ manual for future use.

Pornography exposure – for young men at least – is at saturation point. Research has shown some worrying trends related to earlier onset exposure. 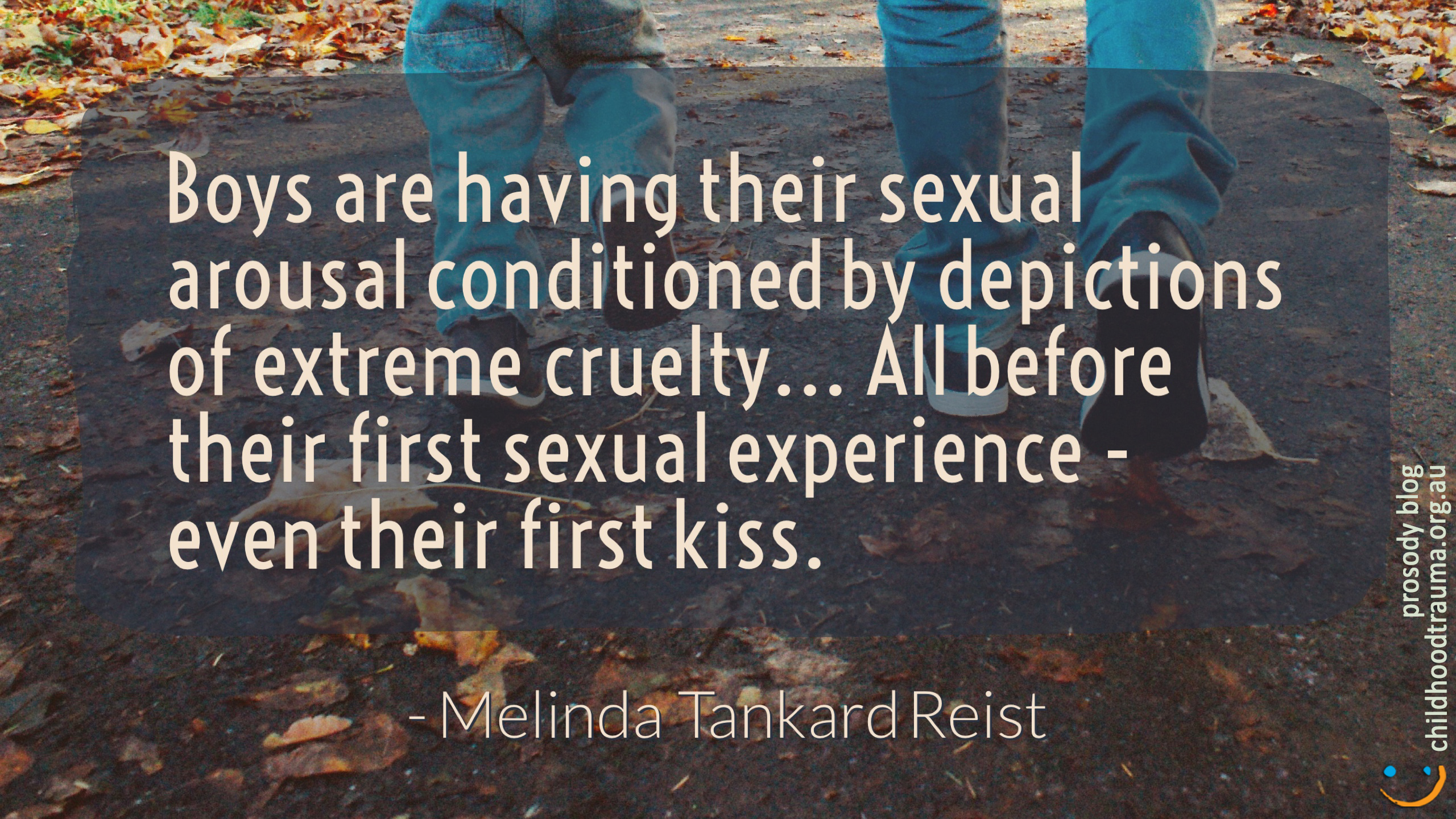 The late Emeritus Professor Freda Briggs, AO, warned that online pornography was turning children into copycat sexual predators. In her submission to the 2016 Senate inquiry into the harm being done to Australian children through access to pornography on the internet’, she drew links between pornography and child sex abuse, paedophilia and child-on-child sexual abuse.

Professor Briggs cited a distressing litany of attacks on children by classmates, including a four-year-old boy requiring a chaperone to stop him assaulting other children in ‘sex games’ at a South Australian kindergarten, a six-year-old boy who forced oral sex on kindergarten boys in the school cubbyhouse and a group of boys who followed a five-year-old girl into the toilets, held her down and urinated in a ‘golden shower’.

Teaching children that sex is about use and abuse

The Australian Medical Association has also spoken out, with vice-president Stephen Parnis saying the internet was exposing children to sexually explicit content that taught that sex was about “use and abuse.”
“There are increasing levels of aggression and the physical harm resulting from sexual acts is becoming more apparent,” he said.

The Australian Psychological Association has added its voice to rising concern, describing the “impact on young people’s expectations of sex, sexuality and relationships [and] increases in sexual violence amongst children and young people.”

Over the past decade, we have seen a growing trend of younger children engaging in problem sexual and sexually abusive behaviours generally aimed at younger children – in other words, children sexually assaulting children… Pornography is providing too many 10-year-olds with the mechanical knowledge to anally, orally and/or vaginally penetrate younger siblings, cousins and acquaintances.

In a submission to the Victorian the Royal Commission into Family Violence, Etheredge & Lemon stated that;

Sex offences by school-aged children have quadrupled in Australia in only four years. Authorities cited attribute increased exposure to online pornography for the rise. The Australian Psychological Society estimates that adolescent boys are responsible for around 20% of rapes of adult women and between 30% and 50% of all reported sexual assaults of children.

A growing body of evidence 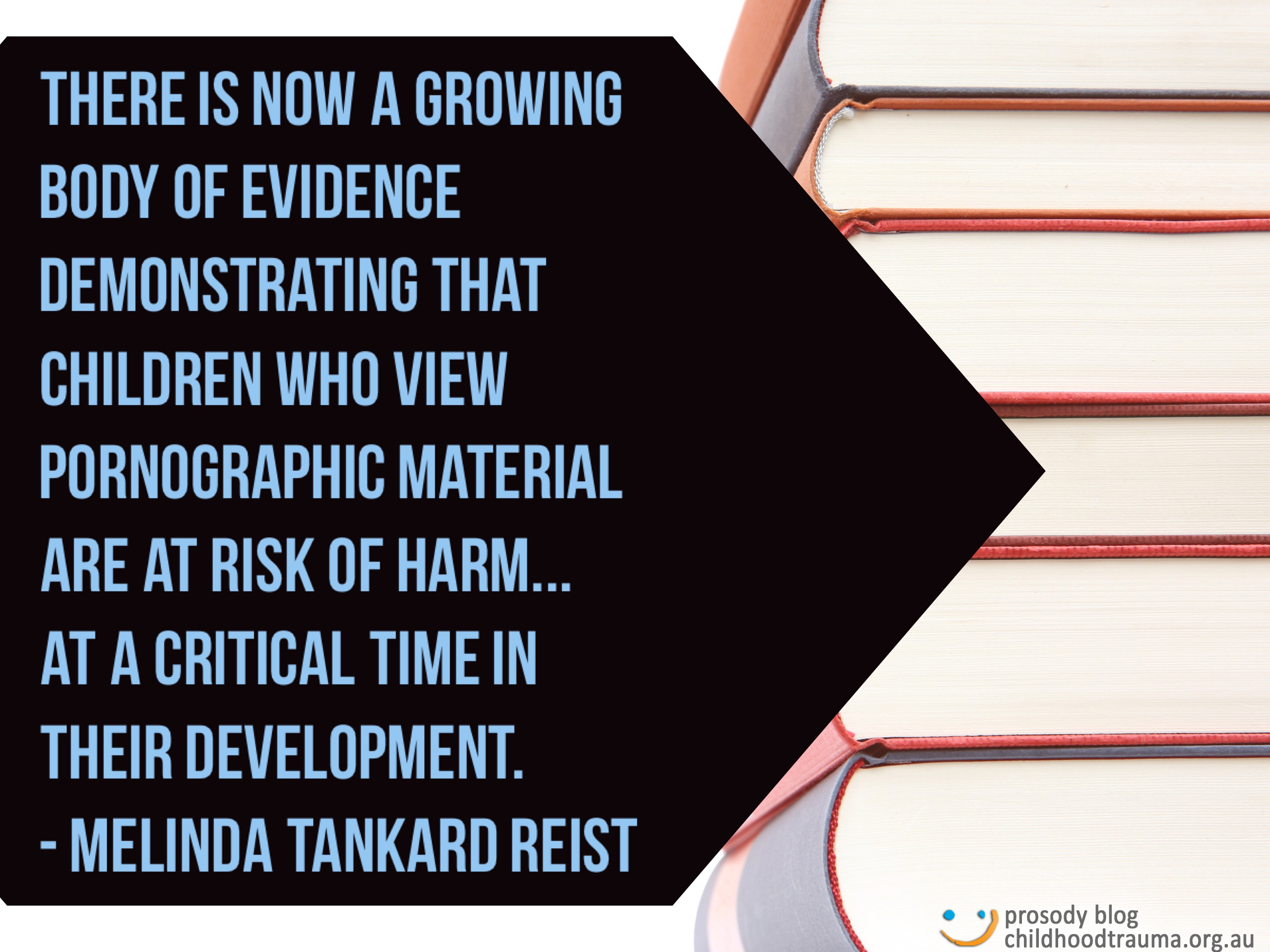 There is a growing body of evidence demonstrating that children who view pornographic material are at risk of harm to their psychological development and mental health at a critical time in their development.

In 2012 the UK Independent Parliamentary Inquiry into Online Child Protection found that exposure to pornography has a negative impact on children’s attitudes to sex, relationships and body image.

The first year of our Inquiry … revealed shocking rates of sexual violation of children and young people… The Inquiry team heard children recount appalling stories about being raped by both older males and peers, often in extremely violent and sadistic circumstances, and in abusive situations that frequently continued for years… The use of and children’s access to pornography emerged as a key theme… It was mentioned by boys in witness statements after being apprehended for the rape of a child, one of whom said it was ‘like being in a porn movie’; we had frequent accounts of both girls’ and boys’ expectations of sex being drawn from pornography they had seen; and professionals told us troubling stories of the extent to which teenagers and younger children routinely access pornography, including extreme and violent images. We also found compelling evidence that too many boys believe that they have an absolute entitlement to sex at any time, in any place, in any way and with whomever they wish. Equally worryingly, we heard that too often girls feel they have no alternative but to submit to boys’ demands, regardless of their own wishes.

A 2012 review of research on ‘The Impact of Internet Pornography on Adolescents’ found that adolescent consumption of Internet pornography was linked to attitudinal changes, including acceptance of male dominance and female submission as the primary sexual paradigm, with women viewed as “sexual playthings eager to fulfil male sexual desires.” The authors found that “adolescents who are intentionally exposed to violent sexually explicit material were six times more likely to be sexually aggressive than those who were not exposed.”

On the issue of sexualisation generally, the biggest study ever, of all the research published in peer-reviewed, English-language journals between 1995 and 2015 found:

consistent evidence that both laboratory exposure and regular, everyday exposure to this content are directly associated with a range of consequences, including higher levels of body dissatisfaction, greater self-objectification, greater support of sexist beliefs and of adversarial sexual beliefs, and greater tolerance of sexual violence toward women. Moreover, experimental exposure to this content leads both women and men to have a diminished view of women’s competence, morality, and humanity.

Sexual harassment and bullying, a daily experience for girls 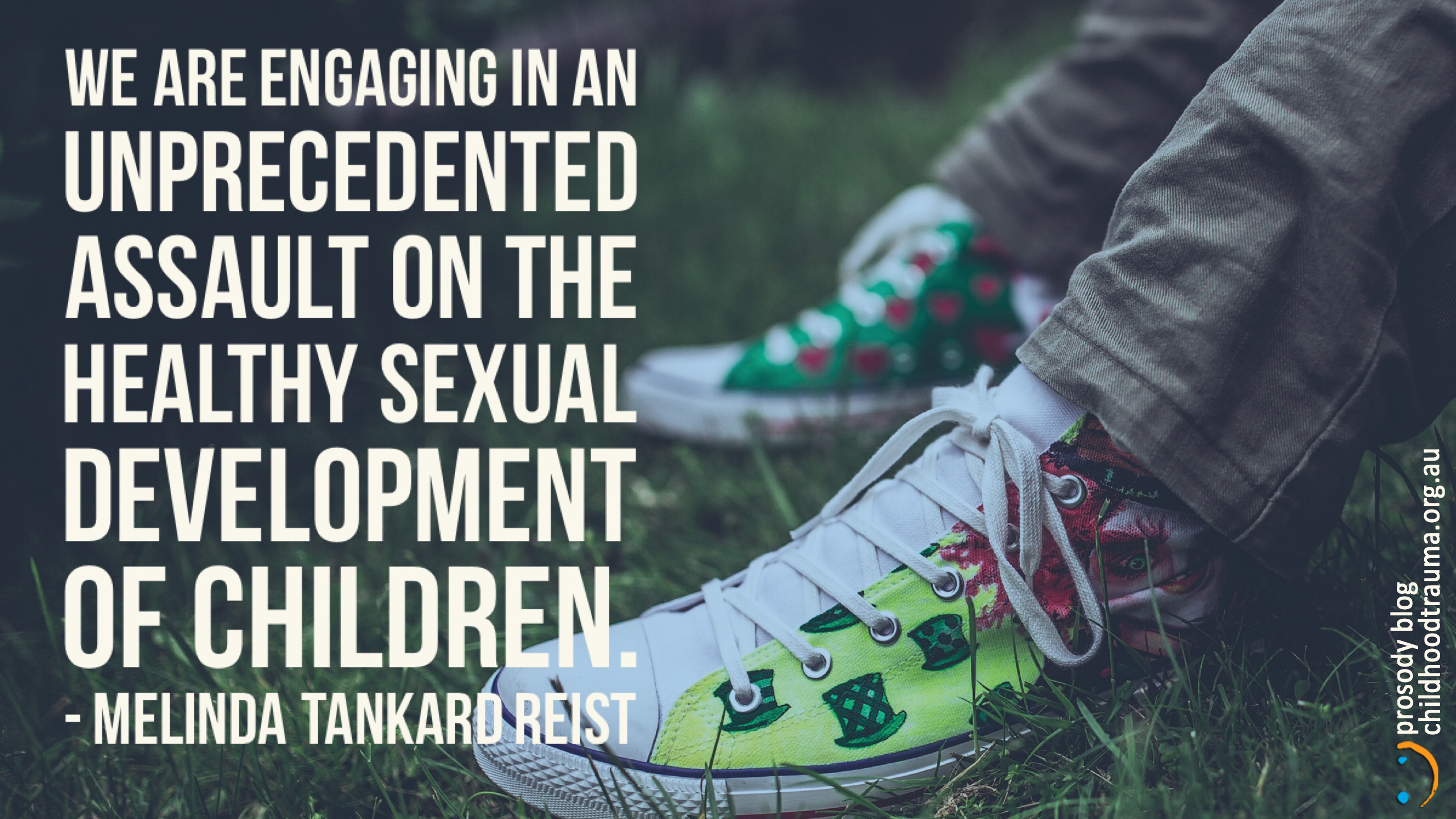 We are engaging on an unprecedented assault on the healthy sexual development of children. The proliferation and globalisation of hypersexualised imagery and pornographic themes makes healthy sexual exploration almost impossible. Sexual conquest and domination are untempered by the bounds of respect, intimacy, and authentic human connection. Young people are not learning about intimacy, friendship and love, but about cruelty and humiliation.

If we are serious about addressing epidemic levels of violence against women, we have to address the drivers of that violence. Pornography can no longer be ignored as one of those drivers, by eroticising and normalising violence as ‘sexy’.

We can do better than this. As professionals in the field who work with children, you have the passion and influence to offer a counter-attack of education and mentoring. Programs should strive at least for the following. We need to help young people critically analyse porn’s messages and help them understand what they are seeing does not reflect reality. We also need to help empower them to navigate their highly sexualised world, resist unwanted sexual activity and seek relationships based on respect, and authentic human connection.

The pornographic experiment on the healthy sexual development of our children must end now.

Professor Freda Briggs (2015) Submission to the Senate Environment and Communications References Committee Inquiry into the Harm Being Done to Australian Children Through Access to Pornography on the Internet. March 2016. http://www.aph.gov.au/Parliamentary_Business/Committees/Senate/Environment_and_Communications/Online_access_to_porn/Submissions

Australian Medical Association (2015) Submission to the Senate Environment and Communications References Committee Inquiry into the Harm Being Done to Australian Children Through Access to Pornography on the Internet. March 2016. http://www.aph.gov.au/Parliamentary_Business/Committees/Senate/Environment_and_Communications/Online_access_to_porn/Submissions

Australian Psychological Society (2015). Submission to the Senate Environment and Communications References Committee Inquiry into the Harm Being Done to Australian Children Through Access to Pornography on the Internet. March 2016. https://www.psychology.org.au/Assets/Files/APS_Submission_on_harm_to_Australian_children_accessing_pornography.pdf

‘Participation through a rights-based lens’ blog article was written by Lauren Thomas, Senior Project Lead, Child and Youth Participation and Engagement Team at Australian Childhood Foundation.   “‘Children should be seen and not heard’ describes my childhood really. It describes what it meant to my grandparents to have us there. We just had to look …

The impact of trauma on sibling relationships

A growing body of literature supports the critical role of siblings in helping children and young people in OoHC maintain a sense of continuity with family.  Here, Noel MacNamara explores the literature and the gaps within it, highlighting how trauma damages the capacity for children and young people to benefit from relationships with adults, and from the growth of healthy sibling connections.