In May this year, The Australian published the story of ‘Hannah Baker’, a young woman now in her 20’s, detailing her story of abuse and the books that she has now written intending to help schools, child protection workers and others learn important lessons from her case. After reading the article, we invited her to write for us on Prosody. Hannah’s story is moving, honest and real, and her advice is pertinent to all of us here as professionals in the sector. We hope you gain much from reading this entry.


Hi, my name is Hannah and I’m now in my 20s. I feel very privileged that I’ve been asked to write this blog. I will be discussing my experiences of being abused and going through the criminal justice system, and the ongoing struggles of ‘rebuilding’ my life after abuse. I have been fortunate enough to have some wonderful people who have been influential in re-shaping my thoughts about myself, and helping me to realise that I can keep going even while life has been very difficult.
As a kid I experienced ongoing physical and sexual abuse at home, for which my Dad was jailed in 2008. To read more about that, please see this recent article from The Australian newspaper.
It actually wasn’t until my mid-teens that I fully understood what abuse was, and that it was okay for me to ask for help. But even finding the right adults to ask for help was a major difficulty. At one point I was sent to the school psychologist, who asked me if I was being ‘maltreated’. In my diaries that night I wrote:
“Maltreated? Seriously, what the hell? Who says that?”
On another occasion, I turned in a school essay where I disclosed that I had been abused – nobody came and asked me about it. In another essay I wrote about sexual abuse and the loneliness of being burdened with a huge family secret, to which the teacher put a tick and wrote “honest response”.
I cannot stress how crucial it is for adults to respond for these silent cries for help.
In my teenage diaries I also wrote about my internal dilemma of not wanting my situation to get ‘reported’ and risk my family being torn apart, vs. wanting adults to step in and help me. At age 16 I wrote about my teacher Mrs Stanley in my diary:
“I know that I don’t want this to get reported but I feel even more hurt that Mrs Stanley, who I’ve clung to as a mother figure in the last few years, really doesn’t care about me. How can you see bruises that massive and not care? Not even say “is everything alright at home?”
To this day, I still feel the wounds of people not stepping in to help me. When my school did finally report me to child protection in 2005, the child protection department closed my file ‘no further action’ without even bothering to meet me. My heart brims with compassion for other kids and teens stuck in abusive situations desperately hoping for an adult to care.

Thankfully, once I became resourceful enough to start seeking help for myself, things started to shift. I bravely started calling Kids Helpline when I was 16 years old. It was Kids Helpline and the local sexual assault centre who provided me with the support and assistance I needed to move out of home. I will be forever grateful.
I was 18 when I made a police report about the abuse, and then endured six years of court dates, the trial, three appeals and then parole hearings. I couldn’t believe it when Dad received parole after serving just four and a half years, despite refusing to do the Sex Offender’s Treatment Program. If another young person asked me whether they should report abuse to police and go through the criminal justice process, I would struggle to give them an answer. The court process itself was demeaning.

I was lucky to have some respectful people within the system who made the process more bearable – such as the friendly Detectives who handled my case, and the doctor at the Sexual Assault Centre who did my medical exam. Being a friendly, consistent support person can make a huge difference. And also, the fact that these people were willing to communicate on my terms (sometimes I preferred writing emails instead of talking on the phone) helped a lot too, especially when I had difficult questions that I couldn’t say out loud due to embarrassment.
As I navigated the criminal justice process, I watched the gap between myself and my same-age friends grow. I watched as they thrived socially and went on to develop romantic relationships or went back-packing around the world, while I struggled to get out of bed some days, feeling the weight of the world on my shoulders. People seemed to think that my Dad being convicted was the ‘end’ of a chapter, but that was when the intense guilt and grief set in. I blamed myself for Dad being imprisoned and didn’t want to be alive anymore.
In my diaries after Dad was jailed, I wrote:
“I know I was doing the best I could when I went to the police – it was that or kill myself. I don’t always think I made the right choice.”
The lack of face-to-face counselling support available to me was a huge barrier to me resolving my issues. Right after signing my police report, I was told that I had used up my ‘session limit’ for the sexual assault centre. I felt so alone. If I hadn’t had Kids Helpline providing consistent support, I don’t know how I would have made it through. Ongoing consistent support from someone you trust is crucial.
After my Dad received parole in March 2013, I went into shock. He had shown no remorse whatsoever. Later that year, I had a mini-breakdown when it all suddenly hit me. I started typing up the diaries I had written as a teenager while the abuse was occurring, as my mind attempted to comprehend all that had happened. Then I found myself writing about the criminal justice experience and how angry I was about it. Once I had purged all of that, I realised that I had a lot of good ideas to share with people who have been abused and their supporters, including professionals. Initially I thought it was all pretty useless, but my Kids Helpline counsellor encouraged me to share it. In 2014, I put it online and the response from organisations, government departments, young people, parents and carers around Australia has blown me away. As it turns out, there are many people who are keen and willing to hear from young Australians who have been abused. 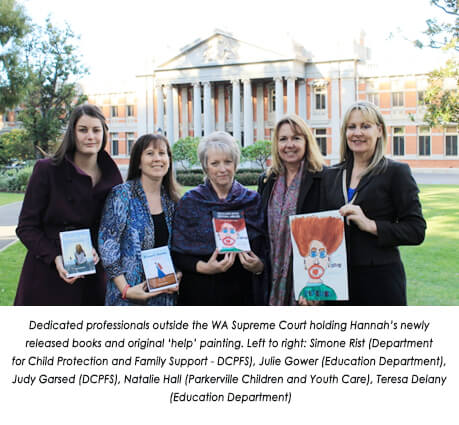 Such was the encouragement and support that I was able to get the books into hard copy. I also decided to write two further books, one for children and one for teenagers, which provide information about abuse and how to get help, and importantly provide hope that things will get better. Since publishing the books, I have heard from people in all states and territories of Australia. Parkerville Children and Youth Care even hosted a book launch for me at The University of Western Australia on 23rd June 2015, which was well attended by staff from child protection, youth support, education, the criminal justice system and police, as well as some parents and carers. It gave me the sense that people really do want to improve these systems. It gives me some hope for other kids…
In the last few months, I also built up the courage to go back to all the government departments and services I had encountered as a result of the abuse, in my home state of Western Australia. There were eight departments/services in total which shows how complex the service system is for young people. Giving feedback to these departments has been very helpful for me, as now I feel I have done my very best to highlight the system inadequacies. Why have I bothered? Because I want other kids to be better protected than I was. Of course, having people from these departments meet with me is different from ‘action’ so it remains to be seen what meaningful changes might be made as a result of these meetings. I strongly encourage that many more children and young people are consulted to give their feedback too.
The most rewarding part of this feedback journey for me has been speaking with dedicated ground-level workers who are doing their absolute best to listen to and support children and young people every day; and work together across departments. To me, there is nothing better. You may feel like you are a small cog in a big system, but please believe me that one person who is kind, consistent and supportive can make the world of difference in a young person’s life.
To read more about Hannah and her books, please visit http://www.dealingwithsexualabuse.com.au

It’s a bit like the beginning of a Mexican wave at the MCG. It really starts with a small group of people who are willing to put a lot of energy into it and it’s their passion, their energy and their commitment that can get 100,000 people to follow them in a wave that can last a long time.

Recently, we were invited to participate in the Big Day Scout, the largest gathering of Scouts in Victoria in the last 50 years.