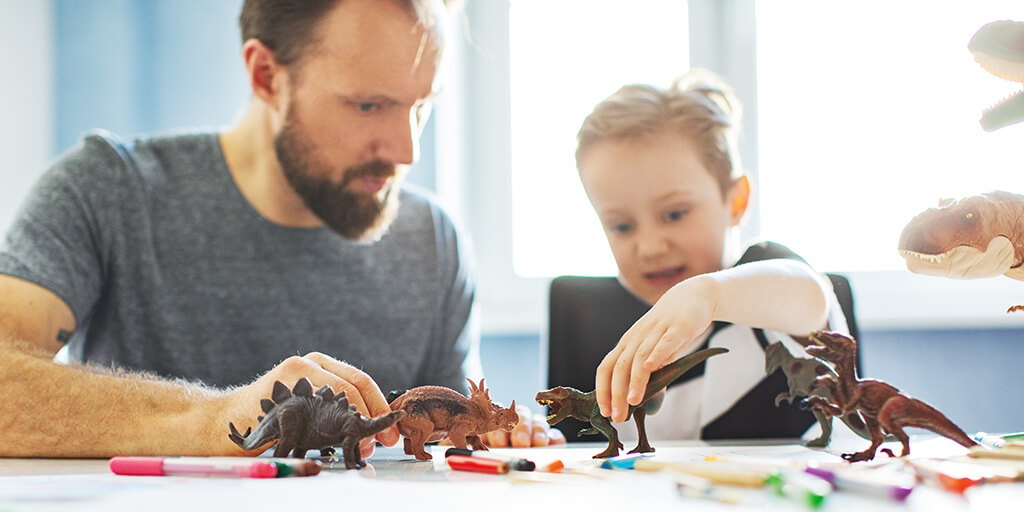 The story of Tim

The story of Tim – how a therapist's own experience of shame and confusion helped a boy recover from family violence.

This article was written by Daniel Howell, Senior Child and Family Counsellor at the Australian Childhood Foundation.

Synergetic Play Therapy™ (2008) is a researched-informed model of play therapy blending the therapeutic power of play with nervous system regulation, interpersonal neurobiology, physics, attachment, mindfulness, and therapist authenticity. Its primary play therapy influences are Child-Centred, Experiential, and Gestalt theories (SPTI, 2019). The modality encourages therapists to use and observe the synergy between themselves and the client, noticing the feelings and emotions that arise in both whilst exploring through play.

The following case provides an example of how the application of Synergetic Play Therapy can allow a child to process their experiences and learn new regulatory tools whilst in-relationship.

Tim was six when he was referred for counselling and at the time he was described as a young boy who would become aggressive and defiant and his mother, Jane, was unable to manage. The referral indicated that Tim experienced family and domestic violence and continued to be exposed to the fluctuating moods of his mother due to ongoing challenges with mental illness.  Tim was co-sleeping at the time, often refused to leave the house with Jane and had periods of encopresis.

As part of the assessment I completed, I spoke to Tim’s school. They described him as a pleasure to teach and despite his attendance averaging three out of five days a week, he was reaching and exceeding his academic milestones. The school had observed Tim’s challenging behaviour when Jane would bring him to school however, he settled quickly when he entered the school and parted from Jane.

As I formulated my assessment, I understood Tim’s symptoms to be that of a dysregulated nervous system. Jane herself found mornings particularly difficult as a result of her depression and her hypo–aroused nervous system and this difficulty as complicated when she then met with Tim’s hyper-aroused state of activation. Jane’s inconsistent presentation which fluctuated between being loving and caring and shaming and blaming was challenging for Tim and he sometimes dissociated to manage. Tim’s adaptation to disconnect from his body resulted in him soiling himself as he absorbed himself into a virtual reality of iPad games to disconnect from perceived threats in his environment.

I decided that I would use Synergetic Play Therapy (SPT) in individual sessions with Tim. Tim entered the counselling centre and he found dinosaurs which he could name and tell me their unique features, diet and real size. Throughout the play, I was always getting their names wrong and I felt stupid and ashamed of myself. The play itself was unpredictable as the dinosaurs would fight in their teams and the most threatening would be overcome to quickly return to life, even stronger. This lasted a couple of sessions and I recall attempting to regulate my sense of shame and confusion amongst the unpredictability.  In thinking of the ‘Therapeutic Stages in Synergetic Play Therapy’ these initial sessions allowed Tim to orient to the process and test how authentic and congruent I could be. 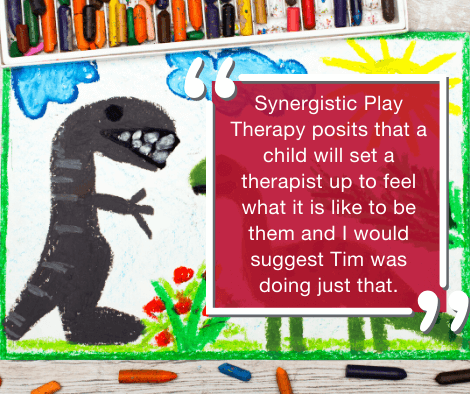 Expecting to play dinosaurs I had them in the room when I invited Tim in one day. Instead, Tim took a seat on the couch and started telling me about the different ‘animatronics’ in a YouTube show called ‘Five Nights at Freddy’s’ (FNAF).  I was scared and confused each session and I did not know which animatronic was good or bad and at what time. I was in a constant state of hypervigilance and would actively regulate using my body and breath. Tim would tell me he wasn’t scared of this, however, being attuned to Tim’s interoceptive experience it was evident he was disconnecting from his body to manage.  Themes of helplessness and fear within a chaotic and unpredictable environment were elicited through Tim’s dramatic play which may have been a snapshot into the perceived challenge he needed to process. SPT posits that a child will set a therapist up to feel what it is like to be them and I would suggest Tim was doing just that. The last session that involved FNAF, Tim provided me with an imaginary axe to defend myself and coached me to survive through a scary and unpredictable night at the pizza shop.

As I continued to see Tim he used other forms of imaginary play to process different aspects of his life and over time the feelings in the room were more regulated and less intense. Play moved to be more predictable and less chaotic and I felt more attached to myself and the experience in the room, suggesting Tim felt the same.

I started the process of closure with Tim as he was rarely absent from school, no longer co-sleeping, he had a more positive outlook and was rarely soiling himself. He also rarely exhibited aggressive and defiant behaviour and was appearing less anxious, now leaving the home easily when Jane offered to go to the park with him. Tim had shown me that despite only seeing a child for a small snapshot of their life, you can make a considerable difference.

I always remember a metaphor Lisa Dion (creator of SPT) uses to explain the importance of therapy – the therapist is like a boxing coach, without providing the water and attending to the wounds, the fighter would not be able to continue in the fighting ring. As he and his mother left after our final session together, she thanked me and stated Tim was a very different little boy.  Tim taught me that I was the most important toy in the playroom and showed me once again that healing occurs within attuned, congruent and authentic relationships.

NB: I had discussed the inappropriateness of FNAF with Jane and she assured me Tim was not watching it. During a closure session when I was discussing what I had learnt about Tim and when I mentioned that he liked FNAF he quickly corrected me, stating he was not allowed to watch that until he was 12.

The Trauma of Separation and Divorce

It is easy to underestimate the impact of family arguments, parental separation, the leaving of one parent from the family home, the disconnection in relationships, the challenges extended family have when perhaps being prevented from seeing a child/young person due to parental acrimony and the interconnected effect these can have on children.

A beautiful story of change and transformation using metaphor in therapy.