In this second part of my series on kinship care (see part 1 here), I examine the support needs of Aboriginal kinship carers, using it to form the rationale for the establishment of our new pilot program in Western Australia discussed later.

A compounding challenge facing Aboriginal kinship carers is the ongoing impact of intergenerational trauma that they continue to deal with in their own lives. The effects of intergenerational trauma, cultural disconnection and family disruption among many Aboriginal communities are increasingly being recognised by the broader Australian community. The high levels of disadvantage faced by many Aboriginal families and communities are, as a result, now widely acknowledged.

For many Aboriginal families and communities, engaging in traditional cultural practices and reclaiming a sense of cultural identity is the key to alleviating Aboriginal disadvantage and regaining their rightful place in broader Australian society. In this sense, Aboriginal culture is strength, and acts as a protective force for children and families. Culture defines who we are, how we think, how we communicate, what we value and what is important to us. The absence of cultural connection for Aboriginal children is a risk factor for their health and well-being. Aboriginal children and young people who have the opportunity to grow up strong in culture develop a sense of strength, confidence, pride, belonging, peace and security that has the potential to guide and protect them through adolescence and adulthood.

Family is the cornerstone of Aboriginal culture. The maintenance of connections to family and community forms the basis of the development of the Aboriginal child’s identity as an Aboriginal person. Failure to support the integration of cultural identity through relationships with family, community and land for Aboriginal children and young people risks damaging their well being, growth, education and life prospects. 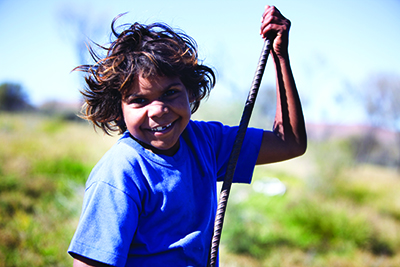 It is also recognised that the effectiveness of therapeutic intervention with abused and traumatised Aboriginal children and young people can only occur with concurrent engagement and support for their families to also heal from the intergenerational experiences of dislocation and trauma.

In their research with Aboriginal kinship carers, Kiraly and Humphreys (2011) found the overwhelming theme from survey respondents was the lack of support available to them. Among other issues, they felt that they lacked information about entitlements; financial assistance; assistance with housing; counselling and help for distressed children; and information about responding to children’s trauma. They spoke of great stress put on families and relationships. They concluded that

“The acute unmet support needs of kinship carers are nowhere seen as vividly as in the Aboriginal community, where larger numbers of children are being cared for by carers living in strained circumstances. As carers age and young children turn into teenagers, providing adequate support will become critical if the wellbeing of both children and their families is to be assured, and further family breakdown avoided.” (p34)

In a recent evaluation of the kinship care support in Victoria, Breman (2014) concluded that until we better understand the complexities within kinship care placements and develop appropriate responses to address them, we run the risk of failing to meet the needs of half of the children and young people who are currently unable to live at home with their parents.

As mentioned earlier, the Foundation has recently obtained funding for two years to develop, deliver and evaluate an innovative culturally responsive, trauma informed model of therapeutic placement support for Aboriginal young people who are subject to the involvement of child protection and/or juvenile justice and their kinship/relative carers across Greater Perth.

With the above knowledge in mind, we have included a focus on support for Aboriginal kinship/relative carers addressing a critical gap in service provision to this vulnerable group. The pilot program will use trauma-informed approaches embedded within a cultural framework, focusing on the strength that can be drawn from connection to culture and use this as a primary platform upon which the program will be based.

The program will also draw on our extensive experience in the provision of therapeutic models of out of home care, including therapeutic kinship care in the ACT. The model will provide assertive outreach and intensive support to the relative carers and young people. Involvement with the relative carers and young person will be goal directed and reviewed regularly. It is anticipated that involvement may last from 3 – 18 months with the average involvement of 8-10 months in duration.

We look forward to sharing our progress and learnings from this new venture with the Prosody audience when we are next able!

Woon-yah Ngullah Goorlanggass means “Caring for Our Children” in the Nyungah language of the South West of Western Australia. We would like to acknowledge and thank Nyungah Elders Doolann Leisha and Walter Eatts for their contribution to the name of our program.

Kiraly, M. and Humphreys, C. (2011). “It is the story of all of us” : learning from Aboriginal communities about supporting family connection. Melbourne : Child Safety Commissioner.

No matter what the therapeutic context, wiring into the prefrontal cortex region of the brain is the foundation for developing empathy, reflection, resilience and relationships. One important way in which we can do these – even with very young children and infants – is through the use of mirror neurons.

The Enchanted Forest: A Magical Place of Healing for Young People in Residential Care