Lessons from the Royal Commission Part 4

Recently, the NSW Family and Community Services Minister Brad Hazzard announced a review of the Working with Children Checks in his State in response to cases where people initially denied a working with children clearance have had the decision overturned in court.

The decision of the courts has raised concerns for the government, but NSW is not alone in needing to evaluate its processes; Whilst all States and Territories have in place or are working towards having some form of mandated screening checks for people working with children, the effectiveness of these checks in preventing the abuse of children has not been evaluated elsewhere either. But this is now set to change. 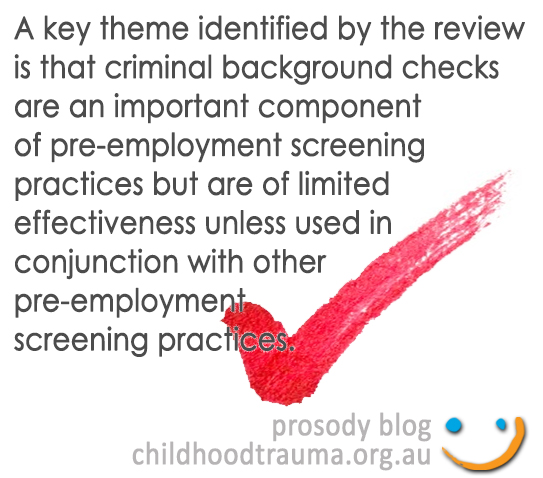 Whilst there is a lack of rigorous quantitative evaluations, the review notes that given the methodological difficulties in researching this issue, it is arguably best explored through in-depth case studies which aim to identify the factors that may have contributed to abuse occurring. The review authors are careful to point out that they identified key themes in the statements of evaluation authors rather than assessing the validity of and supporting evidence for those statements.

The effectiveness and feasibility of criminal background checks was supported by:

However concerns about the effectiveness and feasibility of checks were expressed in relation to:

A fundamental concern is that because of low levels of disclosure of sexual abuse and relatively low conviction rates for all types of sexual assault (in particular child sexual assault), there is often no relevant criminal conviction or other information to discover no matter how comprehensive screening practices are.

The use of other pre-employment screening practices

The effectiveness of other screening practices was supported by case examples where comprehensive screening practices including reference checks were not followed resulting in unsuitable people being employed and sexually abusing children in their care.

An important observation for those involved in interviewing referees and/or being referees is that ambiguous, evasive or undetailed references may reflect unstated concerns on the part of the referee. Case examples were cited that revealed a disturbing dichotomy where referees were reluctant to share information regarding their concerns about a person’s suitability to work with children for a variety of reasons yet they avowed the need to obtain reliable information in a reference and a dependency on the referee to provide relevant and reliable information. 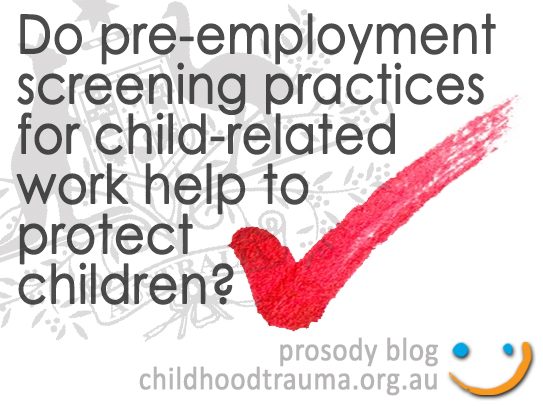 It would appear to be a safe assumption that people identified as unsuitable to work with children should be disqualified from doing so. However, case examples highlighted that even when screening practices were in place areas of concern were not followed up and prohibiting employment was not always a matter of course, even in the face of evidence of child sexual abuse. In most Australian jurisdictions, persons who have a negative finding in relation to criminal history are legally prohibited from working with children. However the circumstances identified in NSW (above) indicate that this is not a guaranteed prohibition.

A study by the Australian Attorney-General’s Department in relation to possible infringements on a person’s right to privacy, rehabilitation and employment in sharing information about pardoned, quashed or served criminal convictions, reported that screening agencies appear to only disclose information ‘where there is a legislative requirement to do so, and is treated in accordance with relevant privacy laws’ and that this does not appear to have had an unjust impact on people seeking to work with children. The review notes concerns that passing soft information such as details of acquittals or decisions not to prosecute could be considered an infringement on individual rights.

The review concludes ‘The literature suggests that, when combined with other policies and practices that promote a positive organisational culture, comprehensive pre-employment screening practices are likely to contribute to safeguarding children against child sexual abuse’.

On 2 November 2015, The NSW Government introduced reforms to strengthen the protection of children, particularly in situations where they are not in the care of their parents or families. These changes have been made under the Child Protection Legislation Amendment Act 2015 and affect all employers and organisations providing child-related services with roles that require a Working With Children Check (WWCC) clearance.   A summary of the changes, as provided by the NSW Office of the Children’s Guardian can be found in this blog entry.

A discussion of the nine domains, the WA Commissioner for Children and Young People thought pertinent to guide organisations in moving towards creating and sustaining a safe space for children and young people.