This article was authored by Suzette Misrachi, is a professional supervisor specialising in trauma and grief of competent and non-disordered adult children of parents with a severe mental illness, a mental health practitioner, psychotherapist and international presenter. This article was originally published in Mind Cafe, May, 2016 Issue 20.

The experience of shame occurs in most people’s lives, which in turn influences their actions and behaviours (Dearing & Tangney, 2011). But do we know what shame is and how we should regard it?

There are many definitions of shame and ways of understanding it. However, we can distil our understanding of shame as a self-conscious, deceptive emotion, arising from self-determined and self-relevant understandings of presumed inadequacy, exposed failures or transgressions, leaving one feeling impotent, ineffective or diminished in self-worth (see Shepard and Rabinowitz, 2013). Accordingly, shame leads towards a sense of hopelessness, disempowerment, self-focus and withdrawal, leaving one with very little room to move. The opposite experience would therefore be pride, honour, self-respect and healthy self-esteem.

Clinicians need to know what shame is. Dearing and Tangney (2011) emphasise the importance of knowing the difference between shame (I am bad) vs. guilt (I did something bad). Clarification of this difference is critical because it dictates and influences clinical decision-making processes. Because shame relates to appraisal of one’s entire self (‘who I am’) it is therefore tied to a person’s sense of identity. While guilt offers the individual something more specific to work with towards redress, shame being non-specific does not. Therefore, individuals with a sense of shame have less personal control or agency about their situation compared to the merely guilt-burdened.

Goss, Gilbert and Allan (1994) describe two forms of shame which interact, mutually reinforcing each other: (1) external shame, in which the person believes they caused someone to think less of them or they fear rejection if undesirable aspects of themselves were exposed, and (2) internal shame in which the person carries negative feelings and thoughts about themselves, e.g., they might be critical of an aspect of self they dislike, commonly a physical attribute.

Is shame good or bad? 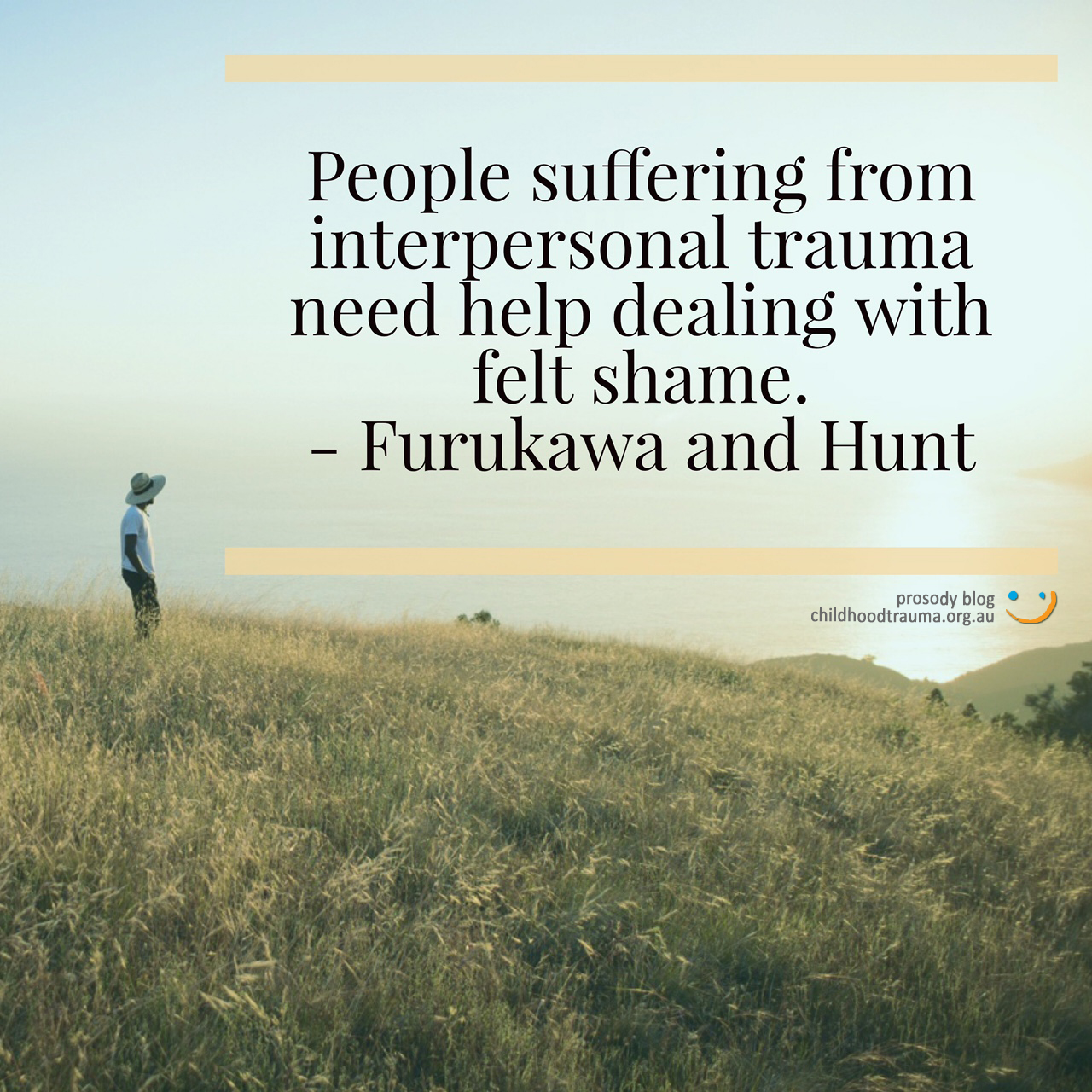 This is a tricky question. Information about shame appears vast and controversial (e.g., Gilbert, 1998). Much can be found on shame in visible or easily recognised populations, e.g., refugees (Furukawa & Hunt, 2011); drug-dependent people (Potter-Efron, 2011); people with eating disorders (Sanftner & Tantillo, 2011); women (Buchbinder & Eisikovits, 2003); and men (Dorahy & Clearwater, 2012). Curiously, when compared to more openly discussed community and public health issues, such as stigma, shame is relatively invisible yet also profound. This makes matters worse as shame can then go about powerfully and quietly shaping people’s internal lives precisely because it is not readily discussed (Dearing & Tangney, 2011). This element of ‘secrecy’ makes it a more harmful mechanism because it is capable of self-generating, multiplying its potency. It is for this reason that Furukawa and Hunt (2011) emphasise that people recovering from interpersonal trauma need help dealing with any felt shame.

Some believe shame is a maladaptive emotion because it does not provide or promote anything particularly useful to the person feeling the shame (e.g., Shepard & Rabinowitz, 2013). On the other hand, Tangeney, Stuewig and Martinez (2014) suggest shame has both constructive and destructive potential, with research calling into question “the presumed function of shame as an inhibitor of immoral or illegal behaviour” (p.799).

Greenberg and Iwakabe (2011) differentiate adaptive from maladaptive shame. Adaptive being bearable as it helps individuals adjust their behaviour for their betterment and that of others, maladaptive being the opposite. It is this maladaptive type of shame that is understood as requiring treatment (e.g., Morrison, 2011).

Still others see shame as neither good nor bad but rather a survival mechanism. This makes sense. For instance, Siegel and Solomon (2003) see shame as blocking or suppressing arousal to prevent being overwhelmed in threatening environments. Herman (2007) takes this an important further step. She sees shame as an internal working model developed in which basic needs and a sense of personal integrity are compromised for the sake of psycho-emotional safety. This is particularly the case for children dependent on their parents or caregivers for their basic needs to be met.

Irrespective of whether shame is good or bad, you and I can’t escape it because, unless one is a psychopath, shame lurks in the background of any therapy hour for almost everyone – including therapists themselves (Ladany, Klinger & Kulp, 2011). This implies that detecting, distinguishing and clinically working through uncomfortable, shame-soaked moments, and being able to differentiate shame from guilt are not enough. We also need to be able to self-identify and process our own shame (Dearing & Tangney, 2011).

After the storm – Supporting parenting after family violence

This blog post is written by Pat Jewel, Manager of our Parenting and Early Years Program. Family violence causes ruptures in the relationships around children and young people. It is an assault on the attachment system living in the mother-child relationship which is a key organizer of children’s responses to danger and safety in the …

The impact of trauma on sibling relationships

A growing body of literature supports the critical role of siblings in helping children and young people in OoHC maintain a sense of continuity with family.  Here, Noel MacNamara explores the literature and the gaps within it, highlighting how trauma damages the capacity for children and young people to benefit from relationships with adults, and from the growth of healthy sibling connections.