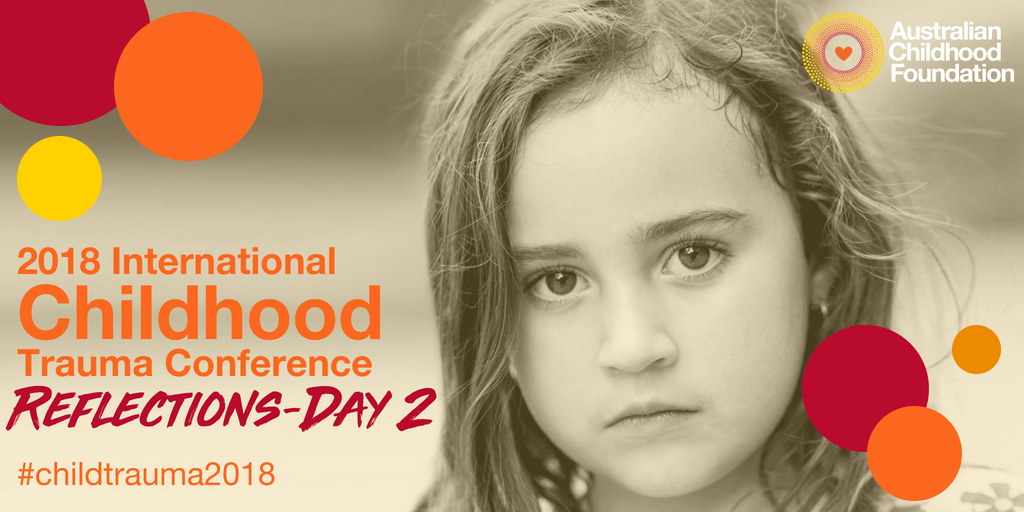 Reflections on Day 2 of the 2018 International Childhood Trauma Conference

This blog entry was authored by Noel MacNamara,
Executive Manager, Research and Policy at the
Australian Childhood Foundation whilst attending
the 2018 International Childhood Trauma Conference

MENTALIZATION AND OUT OF HOME CARE

On Monday, I chaired Professor Peter Fonagy’s Master Class: Techniques of Mentalization Based Treatment. In the session Professor Fonagy stated that the closer emotionally we are to the other person the more this can interfere with our capacity to mentalize.

This caused me to wonder about some of the reasons behind long-term placement breakdowns in Out of Home Care.

Research in the field of developmental psychology and neuroscience has established that the capacity to mentalize is innate to human beings. Professor Fonagy defines it as: “the capacity to envision mental states in self and others” It is “keeping the mind in mind” and helps us to understand misunderstandings. Specifically, it is the process by which a person both implicitly and explicitly understands and interprets the actions of self and others as meaningful, based on mental states such as feelings, needs, beliefs and desires.

Mentalization emerges in the context of the infant-caregiver relationship through early affect mirroring and is essential to the development of intersubjectivity. That is, infants become independent subjects only if they are recognised as such—as beings with minds, wills, and feelings of their own—by their caregivers. To paraphrase Professor Fonagy, an infant develops a mind because the caregivers have the baby’s mind in mind.

Children in the Out of Home Care System

Professor Fonagy reported that the capacity for mentalizing can be significantly impaired by early abuse, neglect and relational trauma. Children who enter care systems around Australia many have not experienced a caregiver who was mind-minded. Many of these children have problems such as: an imperfect mental representation of self and others, low frustration tolerance, low self-esteem, no coherent inner world, impaired affect regulation, problems with social capacities, difficulty in noticing the intentions of others, impaired sense of reality, weak attention regulation, or memory function, limited language understanding, especially when this is linked to an emotional context.

Caring For Children in Out of Home Care

The ability to mentalise fluctuates within each of us. Mentalization comes naturally to most people when they are calm. However, most people will temporarily lose their capacity to think about the thoughts and feelings of others when functioning in a fight–flight mode. It can change from day to day, situation to situation and even when dealing with different people. On a good day, it might take little effort. But if we’re anxious, stressed or not feeling very resilient, our ability to mentalise may be affected. This means that we may not be able to make the attempt to be aware of or understand our own or other people’s emotions and behaviours. It decreases the likelihood of working in partnership effectively, and increases the potential for conflict.

Caring for children who have experienced early life adverse events, such as the children in OOHC can potentially result in periods (at times, long periods) in a flight-fight mode. Poor mentalising on the part of the carer in this context might mean they display a tendency to hold inflexible beliefs, a lack of curiosity, difficulty managing strong emotions and feelings, intolerance of differences, and an inability to assess or interpret the child’s mental states. This, in turn, increases arousal and sets in motion a negative circular process. Ultimately, the representation of the minds of the child can literally be obliterated and replaced by empty or hostile schematic images.

In this context, we can may hear the carer say things like:

“They are never going to change”

“They do it on purpose”

“They need to be somewhere else”

“Unless they change now, they have to go”

A carer’s ability to understand and regulate their own emotions, behaviours and responses to the child in their care clearly has powerful potential. It enhances communication and enables them to effectively engage in the relationship with the child. It can also support good decision-making with regards to how they respond in a given situation. A mentalising adopt a more “not knowing” stance and help them to remain grounded while at the same time it encourages them to reframe or question their complex feelings or thoughts and consider alternative possibilities and different perspectives.

An important point to make is that all of the comments made about carers also apply to those who support carers.Given that we know the adverse impacts of placement breakdowns for children; interventions that have the potential to support placement stability need to be explored and better understood.

For children who come into the OOHC system to be met by minds that comprehend their inner world is a transformative experience but when this is missing their previous experiences of relationships is confirmed. There would appear to be considerable benefit in having a system where workers and carers have an improved understanding of their own mental states and where there is increased curiosity about the mental states of the child.

This blog article is written by Chris Hutchinson, Senior Consultant in the Parenting and Early Years Team at the Australian Childhood Foundation.   Parenting today has all types of stress and pressure and parents don’t need the added stress of unhelpful, negative comments even if they are intended as constructive advice. Parents should feel confident …

This article was authored by Sharon Duthie, Senior Counsellor, Child Trauma Service Victoria, at the Australian Childhood Foundation.  “Who’s this?” I inquired pointing at the self-portrait my seven year old client had painted. “It’s Mr. Nobody!” the child exclaimed as if it were obvious. “Oh!” I said. “I wonder what it’s like to be Mr. …

What comes after trauma-informed practice?

Knowledge of the neurobiology of trauma has shaped our work for at least 15 years now.  We have advocated that being trauma-informed is essential... but what comes next? Foundation CEO Dr Joe Tucci shares his projections of what the field of childhood trauma needs now.