In 2014, how willing are we to act to protect children from abuse and exploitation?

This article was co-authored by Joe Tucci & Janise Mitchell,
CEO and Deputy CEO of the Australian Childhood Foundation.

We have worked on three major community attitude studies about child abuse and child protection at the Foundation (you can find these here). In 2003, we found that the community was extremely ambivalent about trusting children’s histories of abuse and family violence. Thirty-five percent of respondents would not believe children’s stories about being abused.

In our 2006 follow up study, 31% of respondents stated that they would not believe children’s stories about being abused.

In our 2009 study, we highlighted that too many children who take steps to disclose their abuse in the hope that an adult will be protective are not believed. Almost one quarter of respondents in this study either would not believe, or could not make up their mind as to whether to believe children if they disclosed abuse to them.

Whilst it was not specifically designed to identify the prevalence of child abuse in Australia, the 2009 study sought information from respondents regarding whether they had ever suspected a child was being abused. More than 1 in 4 respondents had identified a child or young person whom they believed was being abused or neglected in the preceding five years.

Of these, 44% were so worried about the child’s safety that they had made a report to child protection authorities or the police. A further 21% had discussed their concerns with a professional. However, 1 in 6 (16%) had done nothing. Of those who took no action, 24% were unwilling to become involved and 53% were not certain about what to do or who to contact. 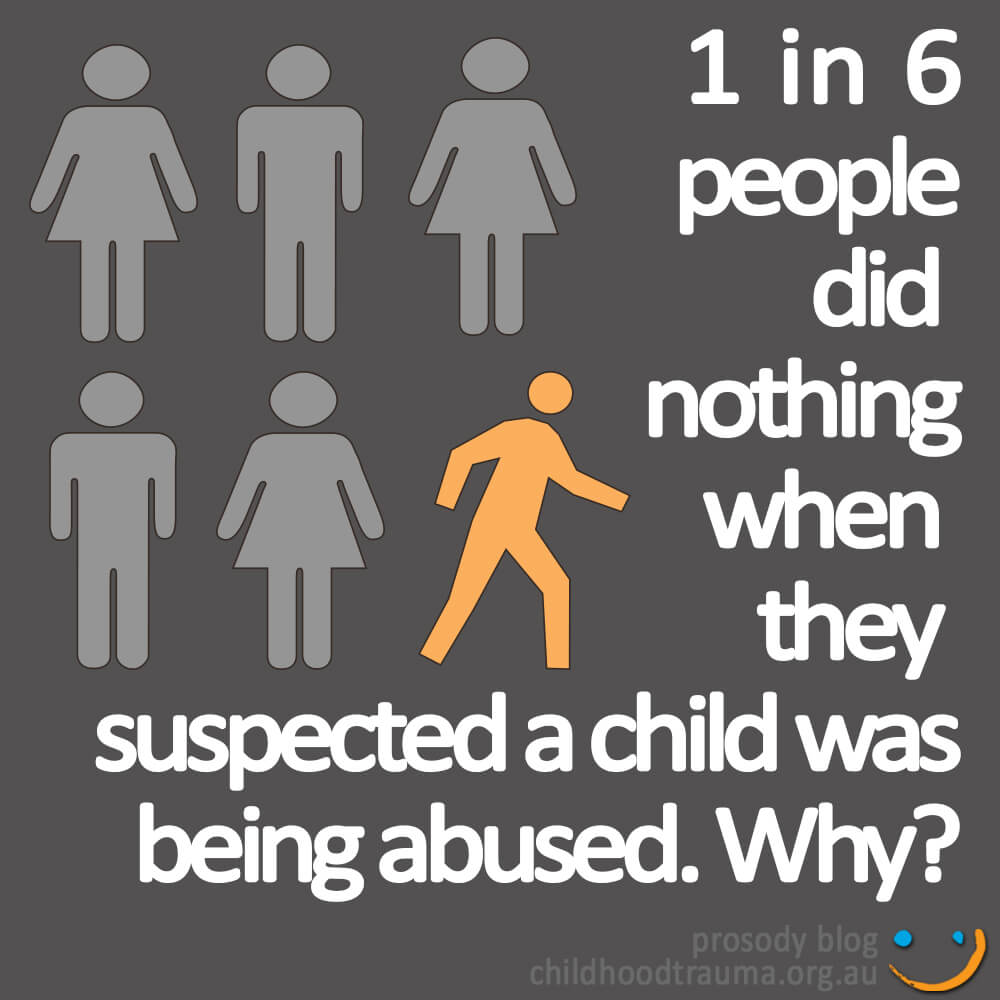 Just under half of these cases involved the physical abuse (26%) or sexual abuse (21%) of children.

Six years on from our original study, the level of community concern about child abuse remains unchanged. In 2009, it still rated thirteenth on a list of community concerns. It remained less of a significant issue than the cost of petrol and perceived problems with public transport and roads.

Despite extensive national media coverage about child abuse in those six years, we argued then that it is as if collectively, the community avoids the issue, preferring to ignore it rather than face up to it. We noted that community engagement follows

There are powerful discursive forces that act against the public airing of the issue.

Child abuse is a confronting and painful topic to think about or talk about. It is challenging to engage with the thought that child abuse is often caused by an adult known to the child, in fact it is most likely to be a member of the child’s own family. This is a complete contradiction to the more popular view that families are nurturing, protective and safe places for children. This popular social narrative of the nuclear family as a haven to the dangerousness of the external world has been reflected in our beliefs that family business is no one else’s business. Arguably, child abuse has been considered a secret scourge occurring away from the public gaze behind the closed front doors of our neighbourhood homes.

By ignoring child abuse, social responsibility for acting to protect children is positioned on the periphery of our collective consciousness.

The active repression of the problem of child abuse implicates itself in mistrust of children’s motivations and the accuracy of their statements. Children need a response that confirms that they are believed and that they are not responsible for the abuse.

As we noted in our 2003 study, in the face of similar findings,

The most critical implication is that it will prevent children from telling adults that they are being abused. Children are able to read the reactions of adults around them. If children are aware that these adults are uncomfortable in talking about abuse, they will know not to raise it with them. In this climate, children will find it extremely difficult to disclose abuse and/or seek support from important adults around them.

With two Royal Commissions now underway in Australia simultaneously into the failure to protect children from abuse – a national one that is focussed on Institutional Responses to Child Sexual Abuse and the other on the inadequacy of the child protection in South Australia – how willing are we as a community to believe children who disclose abuse?

And even more importantly, how willing are we to actually take action if we needed to protect a child or young person?

It is an interesting question for unprecedented times.

Steve Stokes, Program Director at South Pacific Private, shares a regulation technique he developed for use in their work with clients who present with both addictions and childhood trauma.

This blog post is written by Dr. Joe Tucci, CEO of The Australian Childhood Foundation. Over the last two weeks, I have written two blogs about integrating the work of Steve Porges about safety into practice that centralizes it as a resource for children who have experienced trauma. In this third and final blog, I …

7 Top Books About Families of All Shapes and Sizes

‘Family’ for children who have experienced child abuse and trauma can be a shifting and sometimes painful concept to grapple with, and we need more ways to help acknowledge and normalise the spectrum of what ‘family’ can mean. In today's blog post, Senior Counsellor Chris Cussens shares a list of books that include varied stories of ‘family’.