Toxic Stress and Trauma in the Early Years

This article was co-authored by Joe Tucci & Janise Mitchell,
CEO and Deputy CEO of the Australian Childhood Foundation.

‘…in the first phase of learning about things human, the baby will have learned how to invite his mother to play and then initiate an interaction with her; he/she will have become expert at maintaining and modulating the flow of a social exchange; he/she will have acquired the signals to terminate or avoid an interpersonal encounter…the infant will have mastered most of the basic signals and convention…resulting in the dances we recognise as social interaction. This biologically designed choreography will serve as a prototype for all the infant’s later exchanges…(p.1)”.

This mutual meaning making between infant and caregiver, as Ed Tronick has come to term it, forms the basis through which the child’s loosely connect neurobiological systems at birth begin to wire together in preparation for the adaptation that the child will need to show as they grow into their relationships and physical environments.

In the early months of life, the infant’s biological systems are evaluating the range of arousal that he/she will come to expect as normal. Later on as the child develops, these systems will be activated whenever the arousal levels move outside of this window of tolerance.

Infants co-ordinate their brain-body systems with the adults who are pivotal to their world. Babies who experience predicable responses that are nurturing and stimulating come to expect a world that can help them manage their feelings. These carers help to bring intense states of distress to a more comfortable level. Over and over again, as babies, toddlers and young children have their internal emotional life shaped and reshaped in unison with their carers, they learn to carry that experience with them.

As Allan Schore has noted for more than 30 years, an infant’s right hemisphere is the portal through which his/her vulnerability is perceived, acknowledged and resourced in a relationship with those who matter the most. 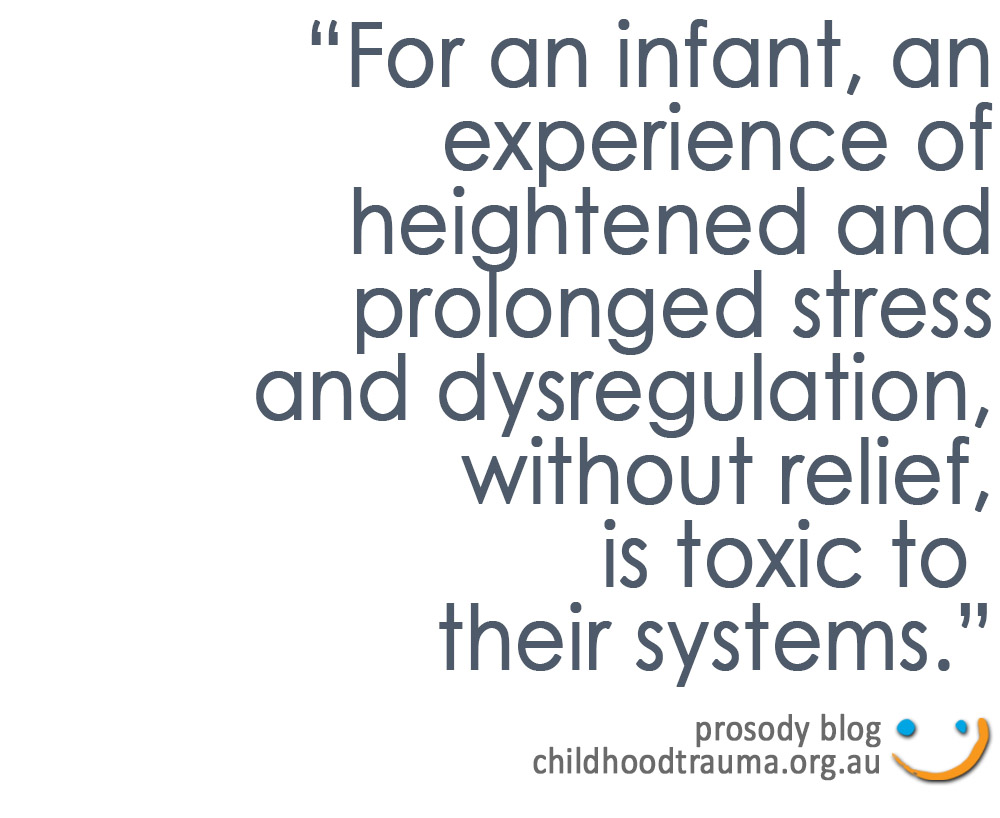 For an infant, an experience of heightened and prolonged stress and dysregulation without relief is toxic to their systems. Family violence, parents/carers with addiction problems, neglect, homelessness, and chronic grief are all conditions in which the availability of caregiver to an infant is reduced with dramatic effects and thus exposed to toxic stress and trauma.

Toxic stress and trauma for infants is painful. Babies will cry and become rigid – a small body in need of a gentle touch and caress but experiencing further withdrawal or even worse, an amplification of the distress.

Toxic stress and trauma sets baseline arousal levels in ways that do not resource young children. Overwhelmed by experiences that do not feel will ever subside, infants are forced to disconnect from their own internal states. They begin to build self-protectiveness into their interactions. Their system locks down to change which is now felt as threat. They avoid novelty and exploration – stopping them from learning.

Toxic stress and trauma shapes the behaviour of young children. They are not comforted by touch. They find it difficult to settle. Routines do not work. Their gaze shies away from the eyes of others. They look absently into the world, not knowing their place or how they will ever find it.

Toxic stress and trauma sets relational templates, patterns of knowing and reacting, that feel so familiar and safe that they continue to be enacted, long after they stop being useful. In early childhood settings these children are easily distressed by changes to routine, easily startled and not easy to settle, can be disruptive and aggressive to others. They don’t seek out comfort from familiar adults. They can seem disconnected from others, an island unto themselves.

The understanding offered by the neuroscience of toxic stress and trauma is a critical knowledge base for early childhood professionals.

The Australian Childhood Foundation has established a partnership with the Foundation of Graduates in Early Childhood Studies in recognition of the increasing numbers of children who are presenting in early childhood services having experienced trauma. The innovative project will provide low cost training across Victoria to early childhood professionals seeking opportunities to build their knowledge and skills in this vital area of practice.

Experienced trainers from the Australian Childhood Foundation will run a total of 18 workshops in regional and metropolitan Victoria in 2015-2016. The training is limited only to Early Childhood Professionals.

To register for one of these workshops, click here.