Stress, Trauma and Resilience – are they connected?

This article was authored by Marina Dickson, Program Manager,
Vocational Education and Training Program, at the Australian Childhood Foundation.

We hear so often in the news about people who have been ‘traumatised’ by a range of events- from having their purse stolen in a shopping centre, being evacuated from school to witnessing a car accident or being sexually abused by a parent. But- are all these events experiences of trauma? Could they be stressful rather than traumatic? How do we know? How do we decide? Is it different for one person from another? 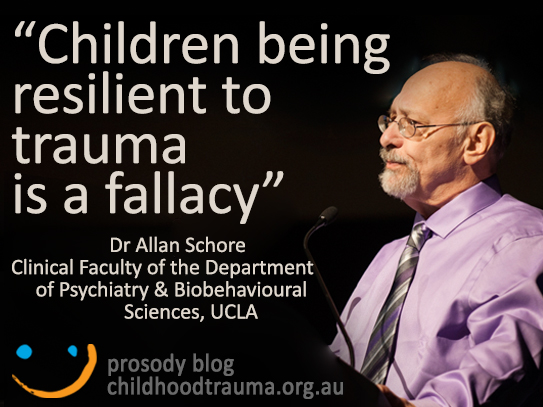 And then, we hear a lot about resilience. ‘Children are resilient’, ‘children today need to be more resilient’ and even ‘if that child was more resilient they could deal with that bullying.’

These three concepts- trauma, stress, and resilience do have connections between them and it is important to be clear about these delineations in our trauma-informed practice. From your own knowledge, and previous Prosody pieces, we know that trauma is defined as:

There are some similarities there with stress. For example, we know that the stress response- fight, flight, freeze, surrender- is activated for stressful events too. Perhaps examples such as public speaking and going to the dentist might elicit a stress response in you! However, I would argue there are two main differences between stress and trauma. One is that we can have positive experiences of stress- these can actually activate physical performance. Trauma is never positive. The other is that stress challenges our capacity to cope rather than overwhelming it as trauma does. I liken it to the difference between getting into the pool with your child to support them learning to swim (stress) and just throwing your child into the pool and saying, ‘see how you go’ (trauma). One challenges and one overwhelms!

But how is this difference between challenging and overwhelming decided? I like to think of stress and trauma as being on a continuum. At one end of the continuum is positive stress and at the other end of the continuum is complex, relational trauma- such as child abuse. The next steps in from the ends are stress and trauma and then there is the middle section which is best described as ‘strauma’. That is the area where one person may experience an event as stressful and another might experience it as traumatic. And what is that assessment based on? It is based on the individual’s capacity to cope.

Their capacity to cope will be influenced by a number of things. Two of these are explored here. Firstly, someone’s age- we know that the younger someone is the less capacity to cope has been developed. We used to say, ‘they are too young to understand’ meaning events would not impact a young child as much. Now we know that the impact is greater exactly because ‘they are too young to understand’- to make any sort of meaning of the threatening experiences.

In trauma-informed practice then the focus on resilience needs to come toward the end of the intervention- when children and young people are able to manage stressors in their lives. It cannot be the focus at the start of intervention because that focus has to be on addressing the impacts of the trauma. And those interventions are found in the definition of trauma itself. If trauma experiences have been multiple then reparative experiences have to be multiple. If trauma is threatening then the focus has to be on building a felt sense of safety. And if trauma overwhelms our individual capacity to cope then we need to focus on relationships that support that child to experience coping from those around them- not expect them to do this on their own.

Guest blogger, Melinda Crole from the YMCA shares insights on how they have gone about initiating organisational change to safeguard children.

This article was written by Chris Hutchinson, Senior Consultant in the Parenting and Early Years Program at the Australian Childhood Foundation. Play is universal, children all around the world do their own version of play. Even if play is not intentionally encouraged in a country or community somehow children still find ways to play. Through …

Is the absence of threat the same thing as safety?

This article was written by Mandy Flint, Senior Training Consultant in the Australian Childhood Foundation’s Professional Education Services. Safety is something that we talk a lot about during the Foundation’s training sessions around trauma and trauma-informed practice. Safety underpins any trauma-informed approach because if the child or young person does not feel safe then we cannot move forward with any …