This blog entry was authored by Sylvia Huntington. Sylvia specialises in working with trauma and adversity in private practice in Thirroul and Ultimo, NSW. She is an accredited mental health social worker, with degrees in counselling and psychotherapy, and training in EMDR. Her experience ranges across private and public settings, drug and alcohol, mental health, crisis, victims of crime, veterans and family violence.

The single most pathogenic factor in the causation of mental illness is how we humans treat each other (Middleton, 2012, p. xiii).

Recently, Patrick McGorry again deplored the lack of adequately supplied, effective and up to date mental health services in Australia (The Australian, June 6, 2010). Adult survivors of child abuse are a group falling through, not the cracks, but the chasms in our mental health system and all too often, plunging into a downward spiral[1] of overwhelming distress, increasing debilitation, homelessness, poverty, addiction, incarceration and involuntary treatment. Many, if not most, never recover, and their treatable illness becomes a chronic mental illness. 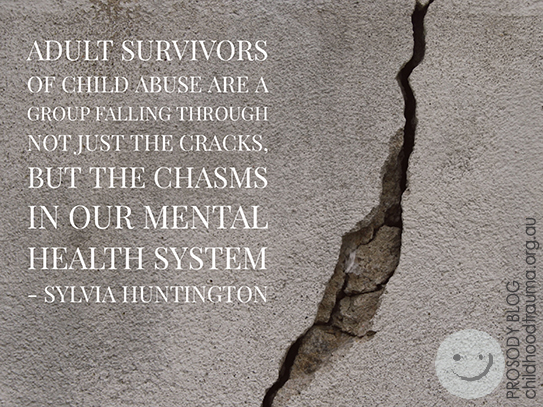 There are many reasons for this tragic situation, including how mental illness is understood. This is complicated by the fact that mental health is a domain shared between various fields, such as medicine, psychology, social work and nursing, each with different theories about what causes mental illness and how to treat it. The relevant literature on mental health is also so gargantuan that few practitioners, if any, can stay up to date, or read outside of their professional domain. Another problem is that the dissemination, and take up, of evidence-based treatment is extremely slow (Foa, et al, 2013; McLean & Foa, 2013). It’s also important to balance evidence with the understanding that knowledge about mental illness is speculative: the fact is the jury is still out on how the brain works (Gaete, 2008; Canino & Alegra, 2008; McKenzie, 1999; Parker, 2006; van Praag, 1998; Thornton, 2000).

At the epicentre of this imbroglio is the question of what causes mental illness. The answers with mainstream acceptance are biological (inherited genes or “chemical imbalance”) or cognitive-behavioural, that thinking or acting in dysfunctional ways is the cause. However, the evidence for both these theories is lacking, debatable or diminishing (British Psychological Society, 2013; Dar-Nimrod, 2012; Glatt, 2012; Humphrey, 1992; Johnson, 2011; Lakeman, 2012; Pine & Leibenluft, 2015; Ross, 2008). The dominance of cognitive behaviour therapy, and medication, is not because the evidence is better, rather because their empires are bigger. Unfortunately, the fact treatment is more often then not ineffective is rarely mentioned (Pemberton & Wainwright, 2014; Ross, 2007).

Meanwhile, there is growing evidence that traumatic or adverse experiences are often, even usually, central to the creation of mental illness, substance abuse and family violence (Anda et al, 2006; Glatt, 2012; Ross, 2007; Schore, 2003; van der Kolk, 2001). In fact, neuroscience is providing a material foundation for understanding how trauma affects the brain and body, causing both psychological and physiological symptoms (Schore, 2003). Trauma theory highlights the management of distressing emotions as a first step in recovery, which fits with growing evidence that inability to manage emotions generates many symptoms, and could itself be a major cause of mental illness (Barlow et al, 2004; Bradley, 2000; Ford, et al, 2005; Johnson, 2011; Mennin, 2002; Porges, 1997; Rossouw, 2012).

Symptoms can be overwhelming and intolerable, creating a sense of being under siege, even on the brink of death. To defend themselves sufferers might attack others or hide away. To cope with these extreme symptoms they might rely on family support or psychological treatment, or turn to alcohol or heroin. If they do not get enough access to a means of coping they can spiral into desperation, debilitation and isolation, as problems compile, resources diminish and options disappear. Many lose their autonomy entirely in the justice system or as involuntary patients, when all the really need is timely, effective help. 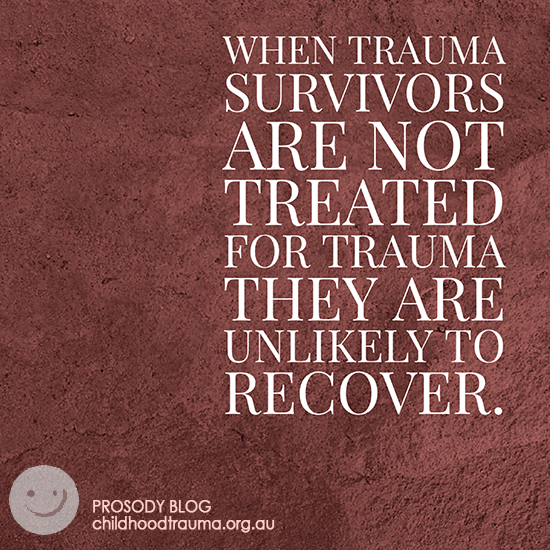 The problem often starts when people with abuse histories are diagnosed with a personality disorder or substance use disorder. I’ve witnessed this in many settings, including emergency services, drug and alcohol, justice and mental health. This is all the more problematic because people who have experienced child or adult abuse account for between 60% and 80% of those using mental health services, or presenting at emergency for psychological symptoms (Briere, et al, 1997; Middleton, 2012). Furthermore, Parson & Bannon (2004) find rape victims are “13.4 times more likely to have a serious alcohol problem, and are 26 times more likely to have a serious drug abuse problem” (p.3).

Yet trauma theory remains marginalized in our mental health system, and has not been disseminated into public policy, clinical services or health education curriculums. Unfortunately, when trauma survivors are not treated for trauma they are unlikely to recover (Foa et al, 2013; McLean & Foa, 2013; Tucker, 2002). Along with not being provided with effective treatment, nor will they be provided with understanding and recognition of the role of trauma in their symptoms. Again and again, after a five or ten minute conversation linking symptoms to a history of child abuse and recommending a treatment for trauma, I hear: “Why hasn’t anyone said this before?” Sometimes this is said with profound relief, sometimes in anger, sometimes with skepticism. Sometimes I am told that even if there are further treatment options, they are simply too exhausted to keep trying, that it is simply ‘too late’.

Without an understanding of trauma, presentations are often bewildering to professionals and at odds with their education, which has encouraged faith in treatments not appropriate for this group (Foa et al, 2013). A professional in this situation might question their training, or the survivor’s commitment to recovery or capacity for change. If the survivor is held responsible, there is potential for institutional abuse to occur, such as, invalidation, blaming, shaming, loss of liberty and refusing to treat (Becker, 1997; Black et al, 2011; Breckenridge et al 2010; Herman, 1992; McGrath & Dowling, 2012; Middleton, 2012; Parson & Bannon, 2004). For trauma survivors this is just another experience of being abused.

The use of euthanasia in Holland to women who have sexually abused as children indicates a new low in systems abuse. In 2015 treating practitioners administered euthanasia to a 20 year old after reportedly trying everything and giving her no chance of recovery. I wonder did they try everything? Did they try the trauma treatments with the most evidence for recovery? Did they allow sufficient time and were the practitioners trained and experienced? Given the marginalization of trauma theory these questions are highly pertinent when considering such cases.

Early death from suicide, physical health problems, violence or substance addiction is certainly a higher risk for adults surviving child abuse. In fact, Rosenberg and Hickie (2013) found life expectancy for people with chronic mental illness 20 years less than the average, and similar to Indigenous Australians. Perhaps not coincidentally the Adverse Child Events study in the USA (which has studied 17,000 participants for 20 years) found that if four or more traumatic or adverse experiences were suffered as a child, this too leads to a loss of 20 years life expectancy (Anda et al, 2006). These sobering facts should be making headlines but they don’t.

While the real cause of the symptoms of adult survivors of child abuse continues to be overlooked, appropriate responses are unlikely to be developed. Until knowledge that trauma is a major factor in the creation of mental illness is integrated into diagnostic categories, dominant theories of mental illness, and into the training of mental health professionals the chasms in our system are likely to remain. While the chasms remain people will continue to spiral downward. The pioneering trauma theorist Bessel van der Kolk (2014) perhaps sums it up best:

>Take me to Prosody Homepage

Lessons from the Royal Commission Part 2

In part 2 of our series looking at lessons from the Royal Commission thus far, we outline some of the important insights in relation to the nature and prevalence of child sexual abuse; perpetrators and organisational awareness of abuse.

From theory to practice

Marina Dickson looks at the benefits and importance of learning for professionals working with children who have experienced trauma.