When I was a teenager, Kurt Cobain committed suicide. It was all over the news. His band Nirvana were at the height of their popularity, his Nevermind poster was on my wall. At his funeral, his widow, Courtney Love, read a letter she had written him, calling him ‘selfish’. Many people think this way about suicide, perhaps you do too.

Needless to say, suicide is confusing for everybody. My previous work roles have seen me work across various suicide and depression related support services, including calls on Suicide Line and Beyond Blue, training clinicians, social workers and rural GP’s in suicidal risk assessment and working directly with suicidal clients. My personal life – like most – has brought me into direct contact with loved ones who have chosen suicide as their solution. It doesn’t matter how long you work with, or how much you experience suicide and suicidal ideation… We all struggle to make sense of it. Grief is complicated, and the emotions too innumerable to allow simplistic answers.

In our practice experience and in the research, there is little doubt that there is a strong correlation between suicide and early childhood sexual assault, in particular that perpetrated by members of an individual’s family. We thought we’d take the opportunity over two blog posts, to discuss the research literature and then share some ideas about how we might contribute to better work with this vulnerable population. 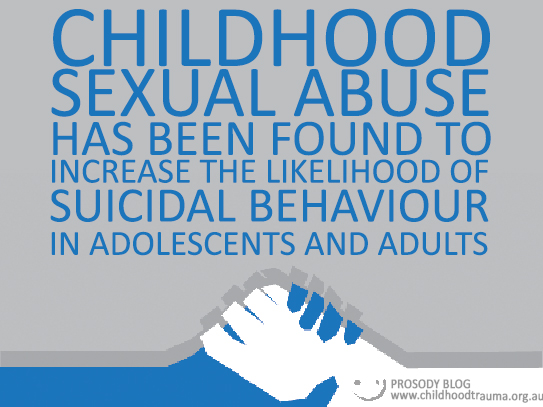 Ulman and Brecklin (2002) investigated the national comorbidity survey, looking at females only. They investigated the relationship between a number of different variables: the nature of sexual victimization; stressful/traumatic life events; post-traumatic stress disorder (PTSD), depression; and whether sexual victimization precedes or follows the onset of suicidal behaviour, including attempts and suicide ideation. The researchers found that women with a history of childhood and adulthood victimization were associated with a lifetime of suicide attempts. PTSD, depression and alcohol-dependence were associated with suicide ideation. Traumatic events and depression were associated with suicide attempts.

Romans et al (1995) screened a random sample of 3,000 women. From this sample 252 child abuse victims and 225 non-victims were selected. Those who had experienced child abuse reported greater self-harm and this applied particularly to those who had endured more intrusive and prolonged abuse. Victims whose abuse had involved force; living away from parents; cohabiting before the age of 19; and sexual assault before age 15 were more likely to self-harm. The frequency of past suicidal behaviour was comparatively higher among victims of child sexual abuse where sexual intercourse was involved. This finding was consistent even when the authors took mental health problems into account in their analyses (Mullen et al, 1993).

Merrill (2001) found that in a sample of female US Navy recruits, a history of child sexual abuse was related to suicidal ideation and suicidal behaviour. Women who had higher trauma symptomatology had experienced physical abuse and/or sexual abuse as children.

In what is one of the largest cohorts studied so far, the relationship between sexual abuse and suicidal ideation/behaviours is further demonstrated in a study by Ackard and Neumark-Sztainer (2002). Their study of 80,000 teenagers in Minnesota found that girls were more likely to have experienced suicidal ideation and attempts than boys and that this frequency was associated with child abuse, especially sexual. 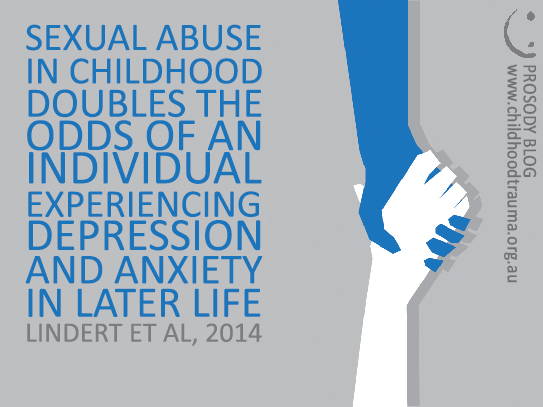 Garnefski, Diekstra and deHeus (1992) also confirmed the link between sexual abuse and suicide in their study of 14,700 students aged 15 to16 years, finding that for boys as well as girls, sexual abuse, depression, loneliness and low self-esteem were related to suicide ideation and suicide attempts.

In 2014, Lindert et al conducted a major review and meta-analysis of the research between 2000 and 2012. They found that sexual abuse in childhood doubled the odds of an individual experiencing depression and anxiety in later life.

In 2014 the National Children’s Commissioner tabled a recent report (2014) in the Australian Parliament that examined the issue of intentional self-harm including suicidal behaviour. She concluded that Intentional self-harm and suicidal behaviour in children and young people is a serious issue in Australia and overseas. Too many precious young lives are lost or damaged by intentional self-harm and suicide. It has profound impacts on families and communities, both at the time and for many years on. When one member of a family is distressed, the whole family feels pain… (p.60)”.

She argued strongly in favour of the need to fill the wide gaps in the knowledge base as to the causes of young people engaging in such behaviour. We at the Foundation agree, and hope that you might comment below this entry as to your own thoughts, research or input on this topic. In my next post, I’ll look at some ideas for practice based in our trauma work.

If you or someone you know is in need of support, contact Lifeline on 13 11 14. A detailed list of support services can be found here.

>Take me to Prosody Homepage

This blog entry was authored by Cynan Kim-Blackmore, Senior Advisor, Safeguarding Children Service at the Australian Childhood Foundation. Imagine you are a childcare worker at your local centre. One of the children is a child named Ben. Ben has been coming to the childcare centre for many years and you have grown to know Ben’s …

Detaching from our agenda

‘Detaching from our agenda’ blog article was written by Nicole Rohani, Senior Child and Family Counsellor, Child Trauma Service at Australian Childhood Foundation.   As practitioners, we generally have some type of agenda when we meet with children and their caregivers. The agenda assists to provide some purpose in our interactions with clients and their …

Noel McNamara explores the outcomes of the TrACK Program – a treatment and care for Kids program which seeks to provide support for vulnerable children and young people who have experienced abuse related trauma.