Permission to Not Laugh: A Comedian’s Unspoken Traumatic Grief

This blog entry is by Suzette Misrachi, is a professional supervisor specialising in trauma and grief of competent and non-disordered adult children of parents with a severe mental illness, a Medicare approved mental health practitioner, psychotherapist and international presenter. This article was originally published in Mind Cafe.

In an interview (WNYC, 2016) with comedian, television and movie actor Michael Ian Black, I was struck by just how traumatized during childhood he seemed. Yet the word “trauma” was never uttered. When Michael was twelve, he was put through a series of unanticipated events: His father was attacked by a stranger in a parking lot. Then, while his father was being treated for a severe head wound, an allergic reaction to the administered medicine caused him to suddenly die. It was medical negligence and so his family received life insurance money and a settlement from the hospital. Soon afterwards, his mother suggested to Michael and his brother to take enough money to get them through college. Because their sister had a disability rendering her unable to work, she got less. Naturally, this decision caused in Michael a moral dilemma which compounded his initial trauma. He said: “it was scary for me to say yes”. Michael seems to have been in a state of triple-fold shock during a most vulnerable period of his life – preadolescence. Straight after his father died, his mum needed to inform the school. Michael asked his mother if she could make up some different reason why he wasn’t attending because he said: 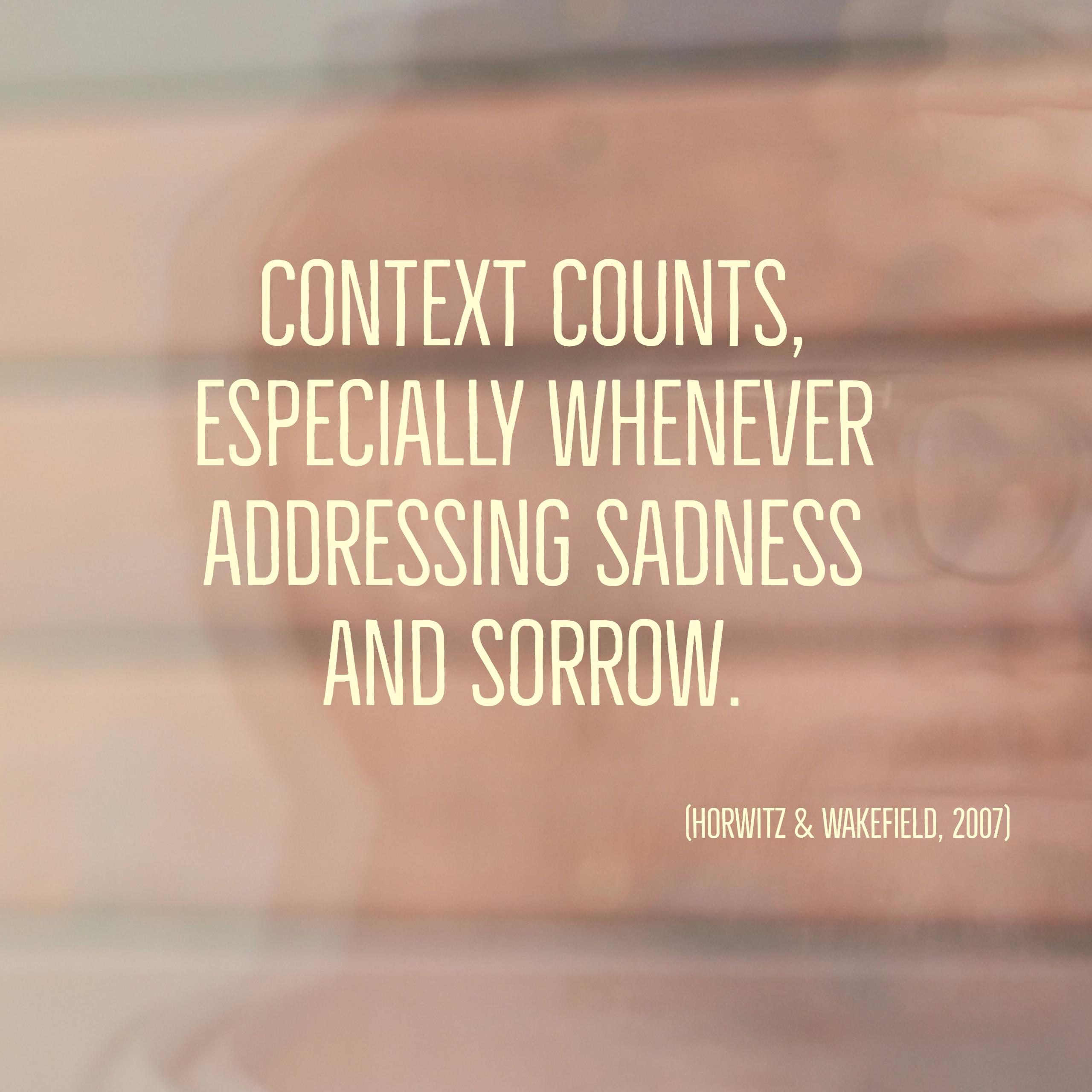 The context of Michael’s trauma during preadolescence is important. Context counts, especially whenever addressing sadness and sorrow (Horwitz & Wakefield, 2007). Unfortunately, Michael’s mother and the surrounding caregivers in Michael’s life failed to understand what was behind this request: “I remember the sort of aghast look she had on her face because she couldn’t comprehend why you would lie about something like that”. Michael’s trauma response is a normal reaction in the wake of severely distressing events (Herman, 1992; Lanius, Vermetten, & Pain, 2010). It appears that Michael did not have enough adults in his social environment who adequately understood his trauma, loss and grief as coming from an intelligent preadolescence who needed answers. Yet he seems to have experienced multiple childhood traumatic grief (Cohen, Mannarino, Greenberg, Padlo & Shipley, 2002), such as: (1) his key male role model, his father, exposed to a violent assault in the car park; (2) hospital negligence leading to his father’s sudden death; and (3) the absence of trauma-informed adults surrounding him during this vulnerable time. Michael was therefore left to clumsily articulate his needs unconsciously, i.e., wanting his mother to lie about his father’s death to the school feeling it was “scary” to say yes to college money, etc. In this podcast interview, the impact of ‘trauma’ never came up, and no mention of trauma treatment either as a child or in adulthood was ever made. Instead, Michael was given anti-depressants to control his (normal) emotions with the typical intended effect of dulling their expression (Price, Cole & Goodwin, 2009). This raises the question: in whose best interest? Like the word suggests, this type of medication is against (i.e., “anti”) depression. But this is based on the assumption that the person has got depression. It also functions to prevent people from experiencing their full feelings, making any grief work near impossible. Horwitz and Wakefield’s (2007) research explain how psychiatry transforms normal sorrow into a depressive disorder. Michael had normal sorrow. The importance of untangling depression from ordinary sadness is critical. It appears that for Michael, this did not happen – and given his situation or context who wouldn’t feel deeply sad? Michael is not alone. Others also suffer the consequence of professionals and non-professionals confusing ordinary sadness with depression. As M. Cook, convenor of Children of Mentally Ill Consumers (COMIC), reports: “I have come to understand that I am not so much depressed but grieving” (Misrachi, 2012, p.159). 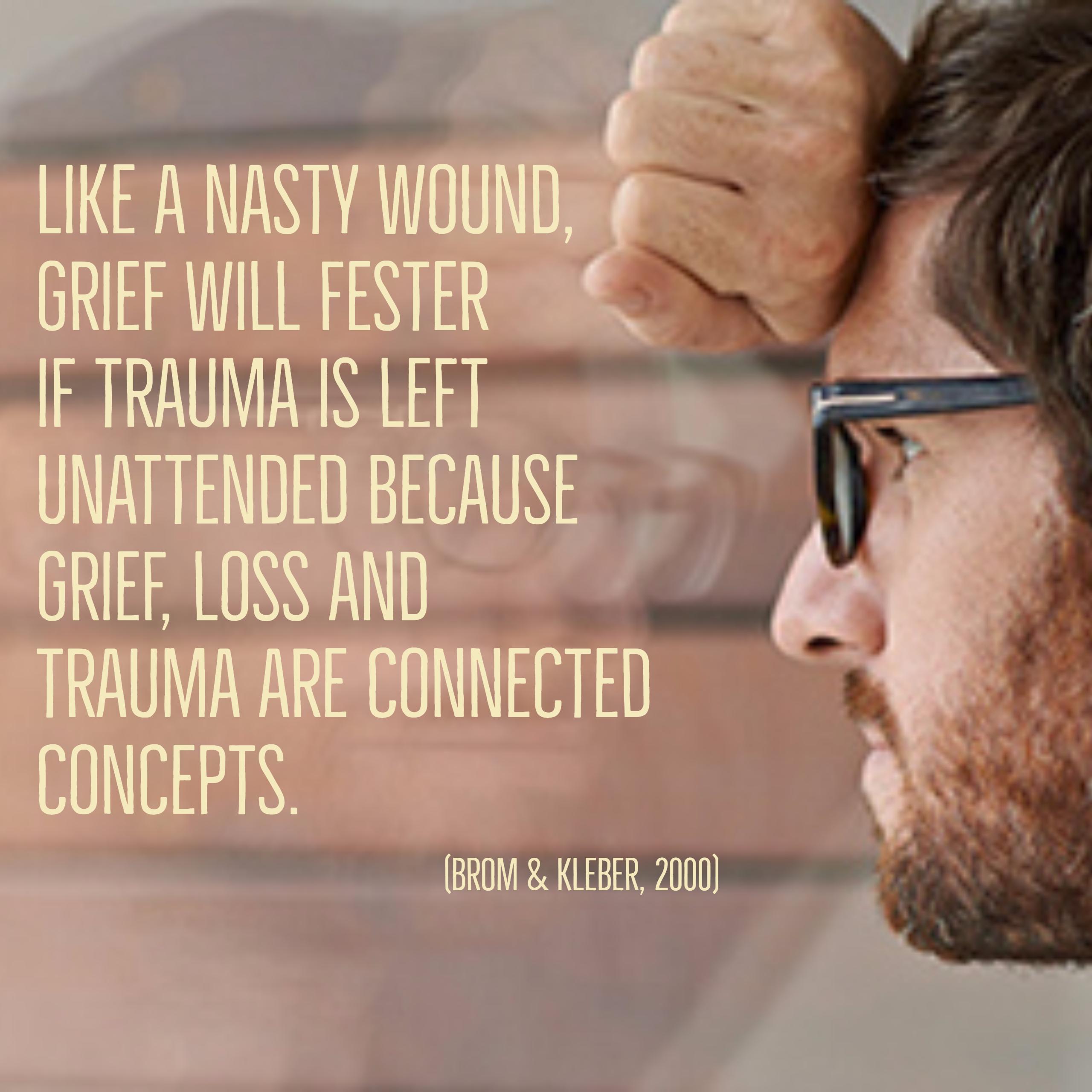 Like a nasty wound, grief will fester if trauma is left unattended because grief, loss and trauma are connected concepts (Brom & Kleber, 2000). Michael’s trauma and grief remained. His ‘festering wound’ would not instantly disappear. Nevertheless, the medical world decided this childhood ‘wound’ needed instant ‘fixing’, i.e., removal or reduction of intensity via medication. Michael was consequently put on anti-depressants throughout his adult life. He went on and off medication then vowed never to get off them. Why? Trauma refers to “a psychological experience in which inner representations of self and world are disrupted” (McCann & Pearlman, 1990, p.3). Michael’s inner representation of self was tragically disrupted then his early grief and trauma were left unattended. Getting off anti-depressants would understandably feel like a threat. It would mean re-experiencing strong unacknowledged and unprocessed early grief and trauma which would include legitimate anger at those who failed to prevent and protect. But none of this appears to have happened in any safe way. Whatever true experiences Michael did have seemingly went underground – denied. And mental health professionals wonder why trauma is a hidden epidemic and why early life trauma impacts on health and disease (Lanius, Vermetten & Pain, 2010). When will society ever learn that grief is normal and that trauma is also a normal reaction to an abnormal event? They only become “abnormal” when they are ignored. Because Michael’s feelings were and are perfectly normal reactions to a series of abnormal events (Herman, 1992), and because grief and trauma are twin concepts (Brom & Kleber), a level of recovery without anti-depressants is possible. Earlier trauma can potentially be processed even now as an adult with trauma-informed grief counseling (e.g., see Misrachi, 2012). In summary, the medical community needs to be cautious. Pathologizing what is understandably deep sadness into a medical disorder is not only ethically questionable, but also unnecessary. Michael’s father unexpectedly died in a preventable death so Michael very likely experienced traumatic grief during preadolescence: “And he died just as I was sort of emerging from childhood”. It would be natural that Michael became extremely sad, but that’s different from being depressed. After all, he lost a much-loved dad at a time when he really needed one stating “I regret that we didn’t get to know each other better”. Too afraid to negotiate getting off anti-depressants, this outcome effectively left Michael seemingly vulnerable; psychologically wounded and his traumatic grief unarticulated.

> Take me to Prosody Homepage

This article was written by Stacey Dellow, Team Leader in Therapeutic Services Program at the Australian Childhood Foundation. What is culturally safe practice? From my perspective as an Aboriginal woman, I need it to include components of the following; collaboration, authentic partnerships, prioritising relationships and having a place for critical reflection.  These things give the …

The Trauma of Separation and Divorce

It is easy to underestimate the impact of family arguments, parental separation, the leaving of one parent from the family home, the disconnection in relationships, the challenges extended family have when perhaps being prevented from seeing a child/young person due to parental acrimony and the interconnected effect these can have on children.

‘We just played basketball for 30 minutes’

This ‘We just played basketball for 30 minutes’ blog article was written by Marina Dickson, Manager in the Professional Education Services team, at the Australian Childhood Foundation.   As professionals we seem to find all sorts of ways to question our own skills, capacity and efficacy in our work. One of those ways is often the …