Is silence really an option for men?

This article was authored by Noel Macnamara,
National Manager, Research and Policy at the Australian Childhood Foundation.

It seems to me that we may be at a tipping point in the family violence movement because people are really speaking out, men and women. It’s so important for men to break the silence around intimate partner violence. Because you actually have no idea who you’re helping when you talk about it, and signal to others that it’s an open subject for you. At some point, you might be offering a lifeline to someone: victim or perpetrator.

It can be surprising sometimes as a male working in the area of abuse and violence. You’re in a taxi, or you’re at a social gathering, and you say what you do; the conversation comes to a full stop. But then often it continues with a wonderful kind of openness and gravitas. If you are able to let people know that you’re willing to talk about it, people are often really curious. The only way we can get past the ignorance which assumes that this is someone else’s problem is to talk openly about it.

Victims (adults and children) are the people who need the most help. However in order to really address this issue, we have to shine a very bright spotlight on those who perpetrate coercive, controlling and violent behaviour— domestic violence is a gendered issue. 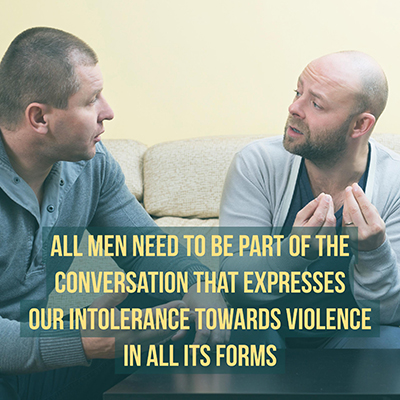 It’s amazing to me how this issue was for so long marginalised as a “women’s issue.” When I speak to men, they often refer to family violence as a women’s issue, they wonder and question whether they have any role in the solution. This is remarkable, because 75% of the victims are women, but the vast majority of the perpetrators (77% as recorded by police) are men (Royal Commission into Family Violence, 2016). 75% of victims of intimate partner homicide were female (Australian Institute of Criminology, 2015). To acknowledge this is not to say that there are no men who sufferer violence from their female partners or that violence does not exist in same sex partnerships. However, surely we must deal with the biggest issue first, and the fact that violence in relationships is now being openly discussed must be helpful across all situations.

This is not someone else’s problem. It may surprise many men to know that their daughters and sons are directly involved in this type of violence. A British crime survey (2009/10) found that 16-19-year-olds were the group most likely to suffer abuse from a partner. Girls as young as 13 report being subjected to coercion and violence from their boyfriends. Suffering at the hands of people who are meant to love you is horrific at any age. It can be especially damaging for young people – the scars can and do last a lifetime. What men say about how we navigate relationships and how we live this in our relationships provides a template for our children and their future relationships. 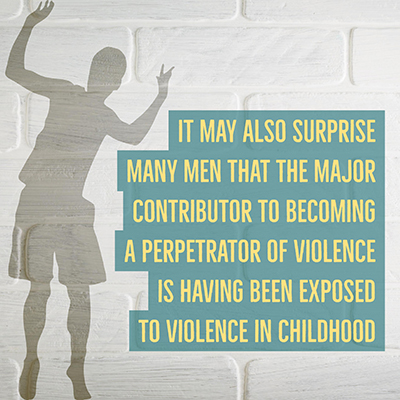 It may also surprise many men that the major contributor to becoming a perpetrator of violence is having been exposed to violence in childhood. Children are changed by growing up with violence and abuse. Children are not the passive witnesses to noise, tension and violence that many people think they are. Children who experience violence and abuse at home are overwhelmed by intense feelings and concentrate hard on their own thoughts. They may feel confused and scared and blame themselves. Violence in the home threatens a child’s sense of his or her family as safe and nurturing. Grandfathers, brothers and mates cannot allow a man who is violent towards his partner to think of himself as a ‘good’ father. We must let him know he is harming his children now and he is impacting their future in unknown ways. The men around this man are also contributing to the suffering of these children by their silence.

All men who are coercive, intimidating and violent have fathers, brothers and mates. These men, by speaking out and challenging views that support violence offer hope to the adult and child victims of violence and, also, provide men with an opportunity to take responsibility for their behaviour. Silence cannot be an option for any man.

There has been ongoing concern about the safety and quality of children’s experiences in Australia’s residential care systems for a very long time. The ABC Four Corners program that aired last week, 'Broken Homes', is another example of the concerns that have been expressed by many. We heard again about the lack of safety experienced by the young people and the failures in the system to support staff. The program raised many questions about child protection systems in Australia. This blog reflects on some of those questions.