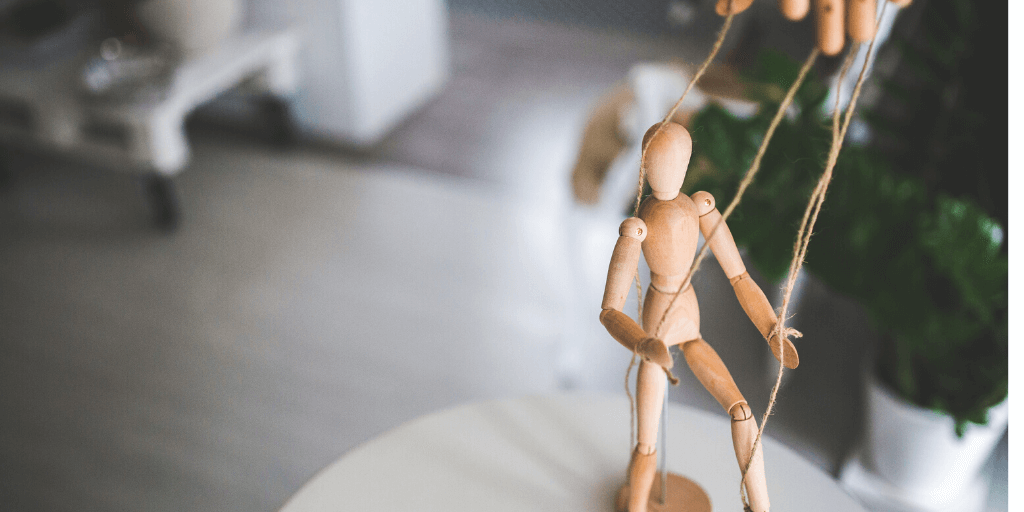 This article was written by Bianca Stephenson-Gromer, a Senior Child Counsellor at the Australian Childhood Foundation.

In recent years, with a greater awareness of family violence and the debilitating impact it can have on the victim-survivors, children and the community, more and more people are feeling empowered to report and speak out about their torturous experiences of family violence. There are a staggering number of adults and children in this country who have experienced family violence. Counting just the women alone, estimates are over 2 million within Australia. Furthermore, two-thirds of mothers who have experienced family violence have reported that children were in their care who either witnessed or heard the violence. 1 in 6 (16%, or 1.5 million) women reported having experienced physical and/or sexual abuse before the age of 15 (as girls), and 1 in 9 (11%, or 992,000) men reported having experienced this abuse when they were boys (ABS 2017b).

We are dealing with a phenomenon that affects an enormous amount of people in our country, yet as a community, we still such limited understanding and insight.

We are still learning how it affects those survivors, and the choices family violence forces adults and children to make in their day to day lives. Family violence is a violation of human rights, and whether we know it or not, it is most likely affecting some of our friends, family members or work colleagues. In particular, for those working in the health industry, a recent study in Victoria found 45% of females in this line of work have experienced violence and/or abuse from a partner. This is well above the national average and creates additional complications when we consider that this industry is often a service available to support those who experience family violence. 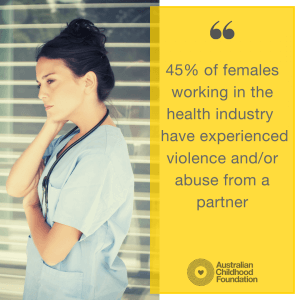 Family violence is an insidious problem, and of the various forms, one of the most damaging, dangerous and yet hidden is that of coercive control. Coercive control is a very particular form of family violence where there is a pattern of acted out assaults, threats, humiliation and intimidation or other abuse used to harm, punish, or frighten their victim. This controlling behaviour is designed to make a person dependent by isolating them from support, exploiting them, depriving them of independence and regulating their everyday behaviour. It creates an environment of confusion and extreme threat for the woman and child. In the context of the family and relationships, the behaviours are said to create an atmosphere of threat. Where children are present, the perpetrator may also attempt to manipulate the children’s beliefs about and behaviour toward the victim parent, or make physical, emotional or financial threats about the children. For children living in a coercively controlling household, even if there is no physical violence present, it has been found that it can create the same lasting harms as direct physical or sexual abuse (Katz, 2016). 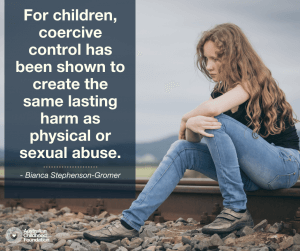 Studies on family violence over the decades, where the voices of women and children survivors have been listened to, have repeatedly shown that the physical and sexual violence was not the worst part. Rather, women and children have described the constant humiliation, the degradation, and sense of self and identity that had been taken from them as being significant. This type of family violence is often hard to capture because as a society physical forms of violence are often recognised as the peak of concern. If we, however, take into consideration the forms of family violence that create the biggest and lasting impacts for women and children, such a view perhaps trivialises these survivors’ experience. Furthermore, physical and sexual violence is not always used within abusive relationships and isn’t necessarily present in the most dangerous and controlling relationships. Additionally, even in situations where this type of violence is perpetrated, it is usually done in a manner that taxes on the victim’s sense of self-worth, dignity and shame, with the intent of bringing the victim to a sense of compliance.

It is imperative to keep this concept of coercive control in mind when supporting women and children who have experienced family violence, and in helping those whose dignity has been chronically assaulted by this type of often discrete, yet identifiable behaviour. Supports need to include a focus on not just the physical violence but also helping victims in reclaiming their dignity in a way that makes them feel more empowered and more in control of their choices and their lives.

Katz, E. (2016) ‘Beyond the Physical Incident Model: How Children Living with Domestic Violence are Harmed By and Resist Regimes of Coercive Control’, Child Abuse Review 25:1, 46–59.

Be your own hero!

This ‘Be your own hero!’ blog article was written by Rebecca Cort, Senior Advisor at the Australian Childhood Foundation.   One of the big questions I get asked as a senior advisor in developmental trauma is how to work with embodied contemplation in the absence of a hero. So many of the children we work …

How pornography may distort your risk assessment of children & adolescents who sexually harm. The second and final entry in the series, this time also looking at a clinical case study.

An Interview with Stephen Porges

Stephen Porges’ Polyvagal Theory is the product of decades of research and has already informed the trauma work of thousands of therapists worldwide.  In town recently for the 2014 International Childhood Trauma Conference, he sat down with Dr Joe Tucci to discuss how his theory informs his latest project: a research partnership with the Australian Childhood Foundation.