11 reasons why grieving in “stages” makes no sense

This blog entry is by Suzette Misrachi, is a professional supervisor specialising in trauma and grief of competent and non-disordered adult children of parents with a severe mental illness, a Medicare approved mental health practitioner, psychotherapist and international presenter. Suzette writes regularly for e-publication Mindcafe, which keeps clinicians up to date with psychiatric and psychological research and opinions from around the world. This article was originally published in Mind Cafe, Issue 15.

Grief is not necessarily a ‘symptom’ signalling something is wrong. It is active, normal, healthy, and a necessary process for recovery of any felt loss. The experience of grief is natural to humans. However, think about the last time you saw someone grieving in your clinical practice. Did you wonder what stage they were up to in their grief? Amazingly, Kubler-Ross’ (1969, 1974) grief model, ‘Stages’, is still regarded as the model to follow. But can this popular grief model cause harm? Grief theories potentially help us understand the slipperiness of this human phenomenon. In fact there’s a smorgasbord of movements influencing the way we view grief, all offering different approaches. But prior to adopting any grief model, certain questions need asking, particularly as applied to Kubler-Ross. The following considerations need to be weighed prior to adopting any grief model—if one is to avoid possibilities of iatrogenic damage or harm.

1. Who is it meant for?—Kubler-Ross’ model, in which grief unfolds via a predictable five-stage process—denial, anger, bargaining, depression, and acceptance—remains appealing as a way of understanding. But Kubler-Ross meant it for the dying, not the bereaved (curiously she did not follow these Stages on her own death-bed).

2. Flexibility— Grief need not have any sequence. The very idea of people travelling through Stages is contradicted in various studies (Bonanno, 2004; Wortman & Silver, 1989) and criticised for its prescriptive style (Corr, 1993). 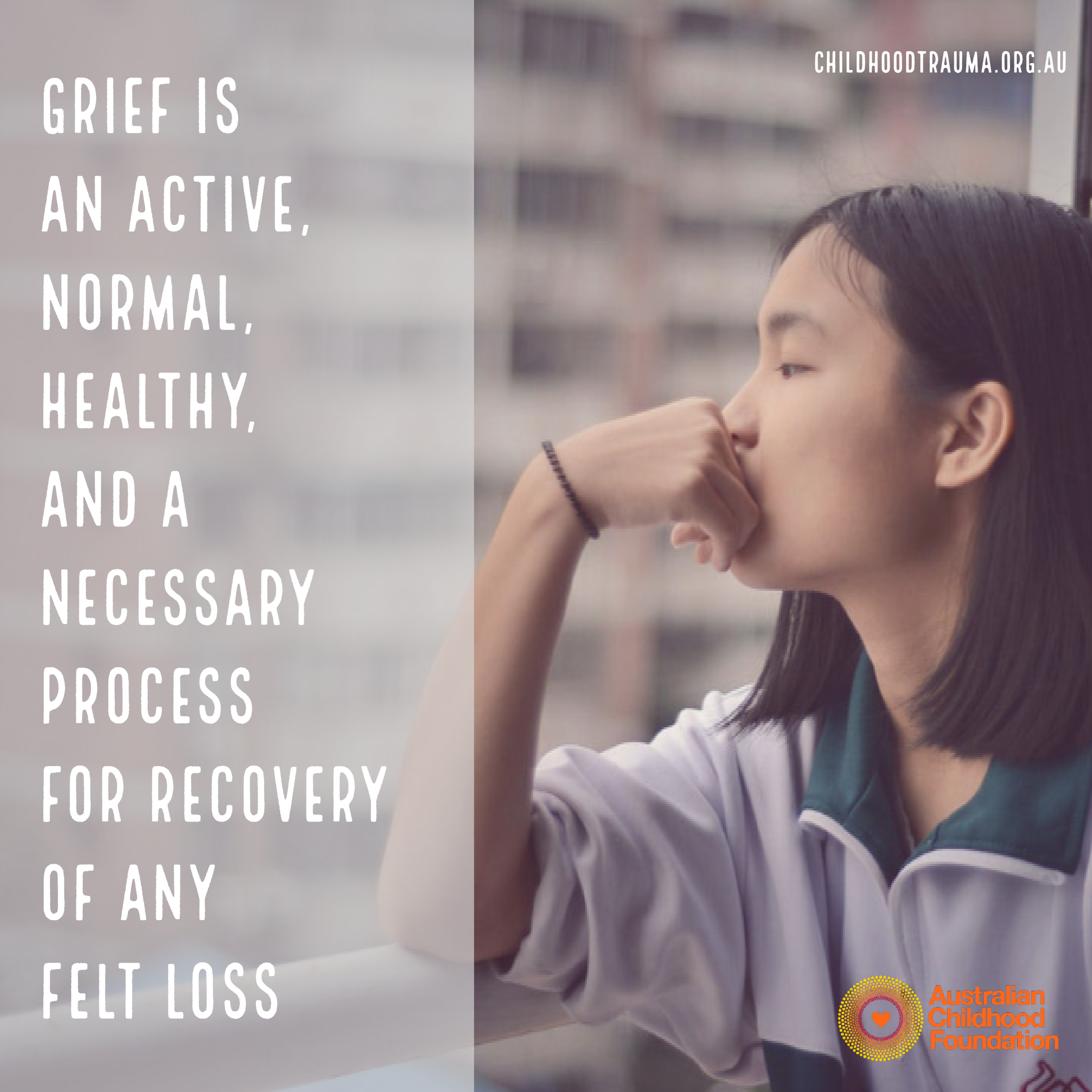 3. Passivity of experience—The Stages model assumes griever passivity (Worden, 1991); grievers have no active part to play in their grief process. If we don’t allow grievers to assume autonomy and authorship of their unique grief stories, i.e., ‘grief ownership’, then this can threaten and consequently hijack their grief process.
4. Does it embrace quick fixes?—Grief has no quick fixes. There are at least 33 grief determinants, each uniquely influencing the grief process (see Misrachi, 2008). Aiming for speedy understandings is risky as it can overlook factors influencing and determining grief responses or reactions.
5. Promised outcomes—Despite the wide use of Stages, there has been to date no hard empirical evidence to indicate that individuals will demonstrate arrival at a prescribed stage of their grief. For example, in examining grief among family members of individuals with serious and persistent mental illness, Misrachi (2012) discovered those using the Stages grief model (e.g., Solomon & Draine, 1996) offer a false promise.
6. Culture and religion implications— Loss is simultaneously a universal and an individual concept. Yet whatever might bring grief to one person might not bring grief to another. What is considered ‘normal’ exists within the context of culture. The Stages grief approach does not account for people’s religious affiliations, religiosity, spirituality or cultural background.
7. Griever empowerment— Stages lead bereaved persons to feel they are, for example, not coping if they are not going through prescribed Stages. Such dis-empowering expectations undermine holistic or bio-psycho-social approaches and interventions.
8. The griever’s social support system—Members of the griever’s social network might wonder why the griever hasn’t ‘achieved’ the next stage, thinking something is wrong if grievers skip or revisit a stage, or don’t go through any suggested stage. By encouraging dissonance between helper and sufferer, this thinking results in ineffective social support provision.
9. Interplay between grief and trauma—Kubler Ross ignored any potential interplay between grief and trauma. Although psychiatry, social work and psychology do not always connect grief and trauma as concepts, as suggested by Misrachi (2012), both trauma and grief are often inextricably connected, with one influencing the other.
10. How scientific is it?—The Stages model lacks scientific rigour. One of the very few, if not the only, empirical investigation into the Stage model by Maciejewski, Zhang, Block and Prigerson (2007) was found to have serious methodological flaws, lack of reliable measures, biases within methods used, and containing interpretations and conclusions threatening to misguide professionals and others (e.g., Bonanno & Boerner, 2007; Silver & Wortman, 2007; Weiner, 2007; Wortman & Silver, 1989).
11. Is there a healthy fit between grieving model and grieving person?— As Horwitz and Wakefield (2007) argue, we need to disentangle depression from ordinary sadness. Stages is potentially an unethical grief model for the bereaved because it was devised for the terminally ill—not the healthy living—and thus more prone to confusing normal with abnormal. As demonstrated, the Stages approach is a poor fit for the non-terminally ill bereaved. Stages is not a suitable model for grieving young children or adolescents.
If one is to do no harm, one movement mental health clinicians should avoid is Kubler-Ross’ Stages. For all concerned, keeping in mind these 11 considerations might make grieving safer—irrespective of which grieving model you choose and the age of the grieving person.
For info on what could influence grief responses and/or reactions see the Grief & Loss page ) from Surviving Parents with a Mental Illness resource website (Japanese translation also available).
References:
Bonanno, G., A. (2004). Loss, trauma, and human resilience. American Psychologist, 59, 20-28.
Bonanno, G., A., & Boerner, K. (2007). Letters June 27. JAMA, 297(24), 2693.
Corr, C. A. (1993). Coping with dying: Lessons that we should and should not learn from the work of Elisabeth Kubler-Ross. Death Studies, 17, 69-83.
Friedman, R., & James, J. (2009). The myth of the stages of dying, death and grief. TAPS Magazine, 15(1).
Horwitz, A. V., & Wakefield, J. C. (2007). The loss of sadness: How psychiatry transformed normal sorrow into depressive disorder. Oxford New York: Oxford University Press.
Kübler-Ross, E. (1969). On death and dying. New York: Macmillan
Kübler-Ross, E. (1974). Death: The final stage of growth. New York: Simon & Schuster/Touchstone.
Maciejewski, P. K., Zhang, B., Block, S. D., & Prigerson, H. G. (2007). An empirical examination of the stage theory of grief. JAMA, 297, 716-723.
Misrachi (2008). Grief Determinants in Grief & Loss page from Surviving Parents with a Mental Illness resource website.
Misrachi, S. (2012). Lives Unseen: Unacknowledged Trauma of Non-Disordered, Competent Adult Children of Parents with a Severe Mental Illness (ACOPSMI). Department of Social Work, Melbourne School of Health Sciences, Faculty of Medicine, Dentistry and Health Sciences.
Silver, R. C., & Wortman, C. B. (2007). Letters, June 27. JAMA, 297(24), 2692.
Whitfield, C. L. (1987). Healing the child within: Discovery and recovery for adult children of dysfunctional families. Pompano Beach, FL: Health Communications.
Neimeyer, R. A. (2001). Meaning reconstruction and the meaning of loss. Washington, DC: American Psychological Association.
Solomon, P., & Draine, J. (1996). Examination of grief among family members of individuals with serious and persistent mental illness. Psychiatric Quarterly, 67, 221-234.
Weiner, J. S. (2007). Letters June 27. JAMA, 297(24), 2692-2693.
Worden, J. W. (1991). Grief counseling and grief therapy: A handbook for the Mental Health Practitioner (2nd ed.). London: Routledge.
Wortman, C. B., & Silver, R. C. (1989). The myths of coping with loss. Journal of Consulting and Clinical Psychology, 57(3), 349-357.
Share Share Share
11 reasonsgriefgrieving stagesStagesSuzetteSuzette Misarachi
Prosody Blog

Glenda Kickett honours her mother, Doolan Leisha Eatts.  A strong a strong Whadjuk and Ballardong woman raised on a mission in Western Australian. Doolan overcame much to raise her siblings, her children and serve her community as an elder and keeper of culture and language.  Glenda has taken the opportunity offered by NAIDOC week 2018 to share why she celebrates her Mum, knowing that it is because of her, that she can.

Can Children Really Give Consent in the Therapeutic Relationship?

‘Can Children Really Give Consent in the Therapeutic Relationship’ blog article was written by Angela Lykousis, Therapeutic Specialist in the OurSPACE NSW team, at Australian Childhood Foundation.   As a therapist working directly with the most vulnerable children in our community – children living in out of home care, the question of obtaining genuine consent …

Colours Of My Heart

This blog post is written by Katherine Gentle, who is a Child Psychologist working with Anglicare in a new service, Cassie’s Nest, a trauma informed counselling service on the south coast of NSW. Thanks to Katherine for generously sharing an activity she regularly uses in practice and related stories with ACF’s wider online community. “Sometimes …