A wall around the heart

Victorian Play Therapist Rebecca Brewer has grappled with how to do her job during COVID-19 with the restrictions, and here she shares a story of impact taken from work she completed with a 12-year-old boy during clinical sessions delivered online.

This article was written by Rebecca Brewer, a Therapeutic Specialist based in Warrnambool, Victoria for the Australian Childhood Foundation.

As a primarily non-directive child play therapist, the move to teletherapy in the context of the COVID-19 pandemic brought with it challenges for myself as a professional, as well for the children I work with. Perusing Creative Arts and Play Therapy for Attachment Problems (edited by Malchiodi and Crenshaw, 2014), I came across the ‘Wall Around the Heart’ expressive therapy technique. Initially referenced by Foster Cline (1991), Athena Drewes later adapted the technique to what I utilised (also adapting somewhat) in a teletherapy session with a 12-year-old boy called Daniel*. 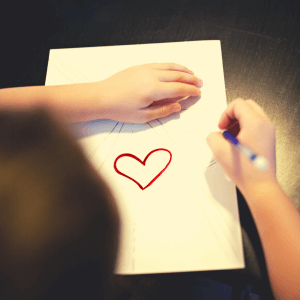 Introducing Daniel to the activity, I invited him to draw a small heart and write “one day old” underneath. We chatted about what the heart is for; Daniel recognised that it keeps us alive, and I acknowledged that, yes, our hearts pump blood through our bodies so that we can function. I added that, metaphorically, our hearts are also for loving and feeling love. I explained that when Daniel was born, his heart worked very well and he was great at giving and receiving love!

I then asked Daniel to draw a second heart, this one a little bigger than the last, with his name and “four years old” underneath (this was the age at which a significant rupture occurred in Daniel’s primary attachment relationship). I briefly spoke of the pain that Daniel had experienced by the age of four – his Dad wasn’t there anymore, he and his Mum had moved around a lot and sometimes things at home were really scary. I observed that this is all pretty hard for a little heart and would have hurt. Daniel drew cracks onto this little heart to represent his hurt.

Daniel then drew a third heart onto the page, bigger still. I explained that children often come up with clever ways to save their hearts from more hurt, and I asked Daniel to draw a wall around this heart. Embracing the metaphor, Daniel explained this was to be a heavy, concrete wall.  Daniel added some scary things outside of the wall, and I impressed upon him what an amazing job that wall was doing to save his heart from more pain!

Daniel was invited to draw one more heart, with his name and dating it for this year. Daniel was asked to draw the cracks again, but to make some of them a little smaller than before. As he drew, Daniel spontaneously added stitches to some of the cracks, as he’d “kind of recovered.” Daniel also added band aids to some of the cracks to additionally represent healing. I asked that Daniel draw the wall around his heart again, this time in pencil. And again, ahead of my explanation of the metaphor, Daniel described this wall as being made of ice and brick. He added that love can melt it through, and there was a door that only real love and care could unlock. I was curious with Daniel, and we considered whether he needed the wall anymore – the wall kept his heart safe from hurt, but it also makes it hard for love to get in and out. Daniel and I talked about what the acts of kindness and care would look like that would unlock the door and crumble the wall around his heart; as we did so, Daniel gradually erased the wall around this last heart.

The ‘Wall Around the Heart’ technique deepened my connection with this young person at a time when we were both being challenged by the introduction of tele-health.  Daniel experienced an opportunity of connection, clarification and healing.  He embraced the technique and was able to process wounds that were yet to be explored.  We continue to process and deepen his understanding of these wounds and hold the “Wall Around the Heart” close.

Principles of Out of Home Care Reform – Part 1

Part 1 in a series of posts discussing principles of Out of Home Care reform.  Here, Janise Mitchell discusses the principle which - in her view - is one of the most the most critical outcome measures of success of any out of home care system.

Can a Teepee be Therapeutic? The answer according to Child Trauma Service  Senior Counsellor, Catherine Ensor, is ‘Yes!’ Read her blog entry showing how teepee’s have been used in our group work with children.