A public health approach to child protection: the need for data

In Australia, many researchers and policy makers believe that statutory child protection systems are overburdened and ineffective. The way forward, they suggest, is a public health model of child protection (O’Donnell, Scott, & Stanley, 2008). Such a model consists of three service platforms – primary services (for all children), secondary services (for more vulnerable children and families), and statutory services (with responsibility for investigating allegations of child abuse and neglect).

It is generally accepted that a public health approach comprises four crucial steps.

However, in Australia there are no reliable surveillance data, in other words, no reliable data about ‘person’, ‘place’ and ‘time’ (Broadley, Goddard and Tucci, 2014, http://www.capra.monash.org/assets/files/theycountfornothing.pdf). 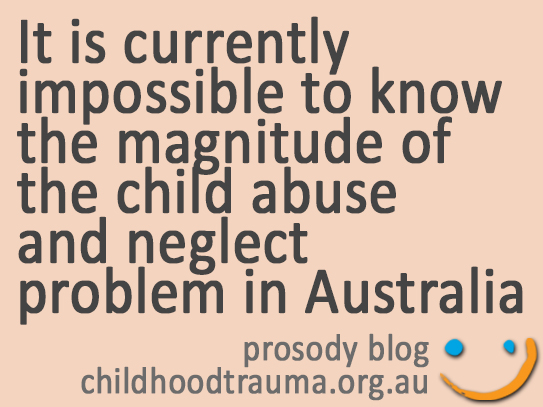 Data are not comparable across ‘place’. This is because the states and territories have their own child protection legislation, definitions and data recording methods. For example, in 2011 – 2012 substantiations in relation to:

The degree to which these differences can be explained based on differences between jurisdictions is unknown.

Data are not comparable over ‘time’. This is because many jurisdictions have introduced new data recording systems over recent years. For example, official figures state that in New South Wales there were:

However it is also acknowledged that in New South Wales the “data are not comparable to previous years” (Australian Institute of Health and Welfare, 2011, p. 120).

The lack of reliable data about ‘person’, ‘place’ and ‘time’ hinders progress through the four vital steps.

If a public health approach to child protection is the answer to concerns that child protection systems are over burdened, it is essential to develop an effective child protection surveillance data system. This will ensure that services are located in areas and targeted towards populations in greatest need. It will enable large-scale evaluation of the effectiveness of prevention and intervention activities (http://www.capra.monash.org/).

This is the first in a two part series on Practice Leadership written by Deputy CEO Janise Mitchell.  This entry particularly looks at what a Practice Leader is in the context of Child Protection.

Reflections on Day 5 of the 2018 International Childhood Trauma Conference