Stepping Inside the Infant Experience

This article was authored by Jeanette Miller
Senior Training Consultant, Training and Professional Development at the Australian Childhood Foundation.

While shuffling out to morning tea amid the milling throng at a well-attended seminar by Janina Fisher a couple of years ago, I overheard one professional say to another, ‘I don’t believe infants are capable of dissociation.’ More recently I heard of another early years professional who stated that the 3 year old of a depressed mother could become depressed, but that the baby of the family would not become depressed. I’ve heard similar assumptions made by child protection professionals who are placed in positions of having to assess the impacts on infants and older children, of living with family violence. Together, these experiences led me to wonder about our understanding of the lived experience of our infants, who by definition, cannot speak for themselves. 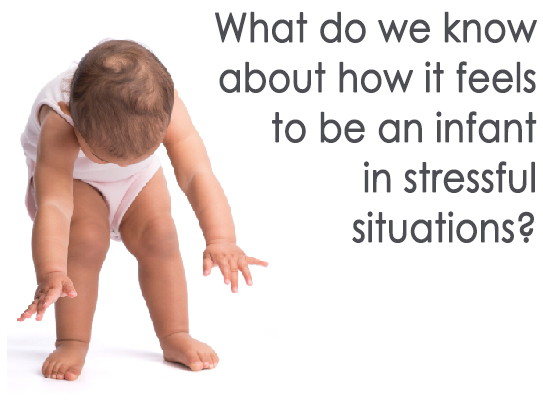 So what do we know (or think we know) about how it feels to be an infant in stressful situations? We can observe their behaviour as did Ed Tronick in his still face experiments, where it is blatantly obvious that infants can and do dissociate in as short a time as 2 minutes when confronted with the stress of disengagement from their parents. We can also take saliva swabs and measure cortisol levels, but to really get inside the infant’s experience, it is probably most revealing to consider what we know about infant brain development.

We know that the brain develops to its greatest potential in the context of relationships- that the brain is a social organ. For an infant it is the regulatory input of an attuned adult which literally grows and strengthens connections in his brain.

Our current understanding of the functions of the right brain includes that it ‘thinks in pictures’ rather than words. Our pre-verbal infants are highly attuned to the tone of voice, facial expressions, postures and gestures of people around them, and get a sense of who they are themselves from what they see, hear and feel in their carers. Imagine the developing sense of self of an infant who is often surrounded by his carers’ frightened and frightening faces.

We know also, that the right brain learns kinaesthetically, focusses on the ‘here and now’ and that its ‘wholistic thinking’ gives us a consciousness of being connected to each other. Recently there has been research interest in the marked differences between the functions and processing of the left and right hemispheres: differences which are so great that psychiatrist and researcher Iain McGilchrist ( 2009,The Master and his Emissary: the divided brain and the making of the western world ) thinks about them as two separate brains with differentiated ‘personalities’. 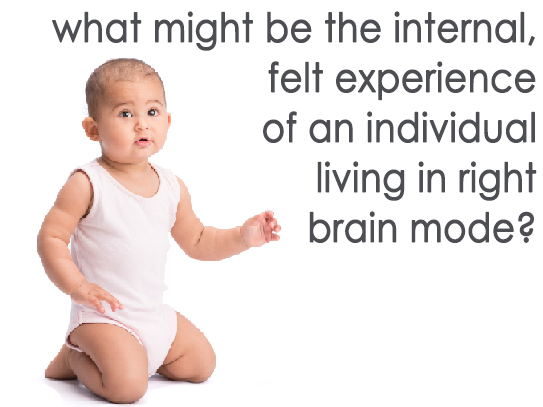 So we know a bit about the right brain- when and how it develops, and what it does – and we can observe how infants react when under stress. But what might be the internal, felt experience of an individual living in right brain mode? What might it feel like to be an infant in fact?

In 1996, American neuroanatomist Jill Bolte Taylor had a personal insight into the workings of the right brain, (which you can hear about in her 2008 TED talk), where she ‘became an infant in an adult body’. Jill talks about her right brain experience after a left brain haemorrhage resulted in her left hemisphere going ‘offline’ in waves, in the hours before she was admitted to hospital. She describes the experience of losing her connection to language, but also her sense of ‘feeling at one’ with all around her: an experience where she could not define boundaries – could not even define where her body began and ended.

Jill’s sharing of her life-threatening experience offers us an opportunity to step inside the infant’s right-brain experience. Let’s think about the infant living in a household where the people upon whom he depends for his survival, are often in conflict… where he often hears angry voices and sees frightening faces. It is likely that when children are in a phase of predominantly right-brain development, that they ‘feel as one’ with whatever is happening around them- that they are unable to define boundaries to their experience in the moment. This could mean that an infant in a violent household- even when he is not physically hurt himself, is likely feeling that the anger and violence around him, is also happening to him personally. 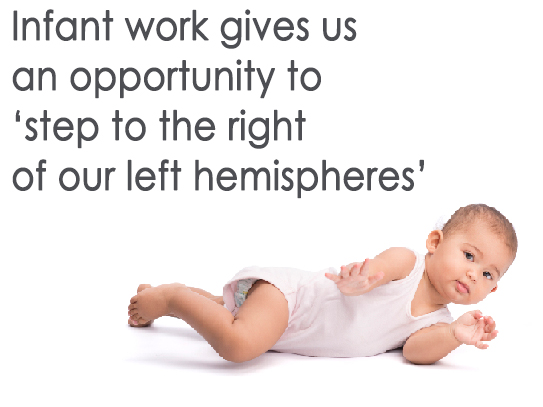 What might all this mean in the context of our work with infants? To be truly attuned to the infant experience it is likely that we best meet the needs of our ‘under twos’, when we access and communicate with, our own right brains, just as attuned parents connect with their babies right brain to right brain. This might be worth considering even in the context of infant assessment. We could wonder, for instance, about the relative merits of using left-brain-oriented psychometric tests and more right-brain-oriented observational methods of assessment with infants.

Infant work gives us an opportunity to (in Jill’s words), ‘step to the right of our left hemispheres’.

I’m interested to know what you think about infant assessment?

Have you heard other assumptions by professionals that assume infants are less impacted by violence?

A discussion about a body and movement based group run through ACF to help children recover from their experience of trauma.

Glenda Kickett honours her mother, Doolan Leisha Eatts.  A strong a strong Whadjuk and Ballardong woman raised on a mission in Western Australian. Doolan overcame much to raise her siblings, her children and serve her community as an elder and keeper of culture and language.  Glenda has taken the opportunity offered by NAIDOC week 2018 to share why she celebrates her Mum, knowing that it is because of her, that she can.