In my clinical work with children I usually use non-directive approaches such as child-centred play therapy and dance therapy but in working therapeutically with a young 8 year old boy in foster care, Timmy, I found a different approach was needed in order to meet his particular therapeutic needs. I suggested we use Dyadic Developmental Psychotherapy or DDP that would involve Timmy, myself as therapist and Camille his foster carer. All of us working together to assist Timmy make sense and process his many care experiences and disrupted attachment relationships. Camille enthusiastically agreed – she was already familiar with DDP as she had attended a Carer session on its use with Dr Dan Hughes at Australian Childhood Foundation’s 2016 Conference in Melbourne and could see its potential benefits for Timmy.

The dyadic developmental psychotherapy (DDP) model is the work of Dr Dan Hughes and has been developed by him over the last 30 years. 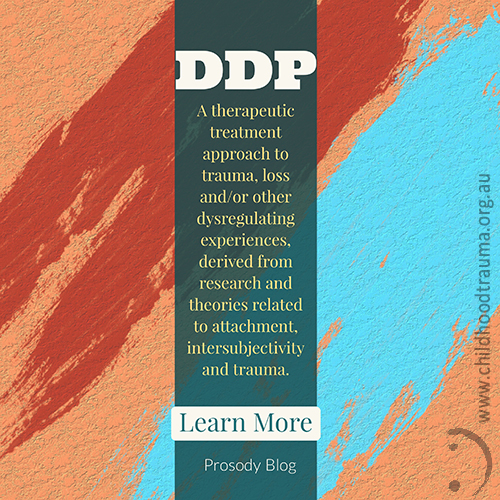 It is a therapeutic treatment approach to trauma, loss and/or other dysregulating experiences, and is derived from research and theories related to attachment, intersubjectivity and trauma. DDP creates a safe setting in which the young person can begin to explore, resolve and integrate their experiences, memories and emotions. It allows for frightening, shameful, avoided or denied experiences to be addressed and processed. Safety is created by ensuring that this exploration occurs within a strong relational context involving the therapist and carer or parent. A strong positive regard for the child is emphasised and the relational DDP context is characterised by nonverbal attunement, reflective dialogue, and the use of PACE. The four attributes of PACE are playfulness, acceptance, curiosity and empathy. Hughes (2011) describes these as central in the development of attachment security in the parent-infant relationship and also central for DDP therapeutic work. As the process unfolds the young person is creating a coherent life-story which is crucial for attachment security.

It seemed to me that DDP would be just the right approach for Timmy. He and his brother Adrian experienced an early environment characterised by chaos, abuse, severe neglect and chronic domestic violence. Timmy’s mother described her own memories of post-natal depression and indicated that as a result of an acquired brain injury she struggled to meet her children’s basic food and health needs. Furthermore, she disclosed that she had anger issues with her children and husband and explained that at times could be quite physically abusive. The Department of Health and Human Services became involved and as a result Timmy and his brother were placed in foster care. At aged 8 years and following several placement breakdowns Timmy and his older brother were finally placed with experienced and trained therapeutic foster carers Camille and Adam. Camille noticed that Timmy was initially reluctant to seek her out for soothing when he was troubled. There were frequent behavioural challenges and verbal outbursts that occurred without an easily identifiable trigger. Furthermore it appeared that Timmy seemed to lack empathy and was socially disconnected from his peers and foster siblings.

As a DDP therapist my aim was to maintain a nonjudgmental attitude and a neutral stance. According to Hughes (2011) the intersubjective stance enables the therapist and client to co-create a new experience of an event while co-regulating the emotion associated with the event. Hughes suggests that by using the intersubjective stance the therapist can convey their genuine and positive regard for the client and their experiences. He says it is the therapist’s responsibility to get to know the client deeply enough to discover the unique person underlying the symptoms and defences (Hughes, 2011, p. 21). Although an experienced children’s counsellor and trained in DDP I felt a rookie in my practical experience of using this intervention. Embarking on such a process with Timmy was quite new to me and I was a little apprehensive about using such a different approach to my usual style. I had no idea when I started that I would find this approach to be so incredibly powerful and offer such positive client results – here is an overview of what happened.

In our first session Timmy was keen and clearly excited at having his carer present. But although he was enthusiastic I could also see that he was also nervous about what was expected of him. This nervousness showed itself in his constant tugging at his hair and twiddling with the buttons on his shirt. I told him what I noticed and suggested that he might feel more comfortable sitting closer to Camille. Timmy squashed himself beside Camille and she intuitively put her arm around him and held him close to her. He settled and the button twiddling somewhat subsided.

The session flowed very naturally and evolved authentically from our conversation. Timmy told me about enjoying living with Camille and the large foster family. This allowed me to wonder aloud that this feeling of connection that he was now experiencing with Camille and his foster family was not something that had always be there for him? Timmy nodded his head and agreed this was a new and different experience. This allowed me to bring into the conversation his many different placement experiences and the confusion he must have felt. I knew Timmy was with me and listening to this dialogue, as he would interrupt every now and then to correct something I said or provide a specific name of a carer. I then wondered aloud if perhaps Timmy was concerned that he might move from Camille and this family he was enjoying being a part of. Timmy’s cheeks paled and his downward head and barely perceptible nod conveyed to Camille and myself that this question nailed a chief concern for Timmy. Then something very beautiful occurred, with Camille present hearing and seeing Timmy’s distress she was able to build a narrative about her commitment to Timmy and his brother and reinforce for him that he was staying for as long as he ever wanted or needed. Timmy tucked himself further into Camille’s arm and she held him like a cherished baby, all the while gently rocking him and talking to him about all the other kids in the family and how kids stay with her for as long as they want and need. 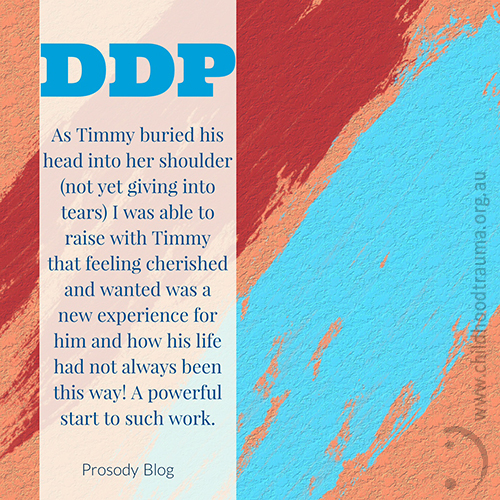 The following week Timmy and Camille came again to the dyadic session. Surprisingly at this second session Timmy already began to verbalise some of the things he was worried about. It seems that the initial session had developed a sense of safety and security for Timmy that he realised his DDP session was a place where his deep fears were going to be exposed and reframed and that he would hear, feel and experience the emotional and attachment support offered by his carers.

The sessions have continued and Camille continues to work on building that strong connection and safety for Timmy. Giving him comfort and reframing his fears. Stern (2010) calls this ‘intersubjective’ and highlights its importance for young people. According to Stern (2010, pg. 43) ‘Intersubjectivity is the sharing of another’s experience’. He describes this as sharing not only the content of language communications but also emotions and affect attunement. Sensations from the viscera, muscles, entire body and mind form a backdrop to a client’s feelings and internal state. The dyadic work of Dan Hughes enables myself as therapist to observe the unspoken and through using PACE (playfulness, acceptance, curiosity and empathy) bring it into the present moment experience of the counselling session with the support of Timmy’s caregiver. According to Hughes (2011) as a result of the neutral and nonjudgmental therapeutic stance and this together with reflective comments enables a client’s feeling of safety to be enhanced and promotes exploration into emotionally difficult areas, allowing for any associated emotion to be co-regulated and any thoughts about the event to be enhanced.

We have now had five sessions and already there have been some significant and positive changes in Timmy. Camille has noticed that there is a real shift for Timmy when he starts to become dysregulated as he now pauses at the start of a verbal outburst and appears to reframe the situation and take a different approach. Mostly now if he becomes dysregulated he can stop and calm himself. Camille has said there is a genuine apology coming from Timmy and overall significantly less physical outbursts. Similarly at school his Principal has observed similar behavioural improvements observed and has also noticed that Timmy is engaging better with other children.

The real benefit though is that through DDP work Camille and Timmy have moved into deeper levels of experience and understanding which is evident in their ongoing interactions with one another. Camille has demonstrated a deeper understanding of Timmy and his needs and a stronger sense of compassion for his present moment experience of past traumatic events. Timmy is also showing a stronger sense of connection with his foster family and an ability to be vulnerable and soothed by Camille in times of difficulty. I anticipate that as the therapeutic work continues this deep and rich intersubjective experience between carer and child will be even further developed and enhanced.

The second in a two-part series looking at Kinship Carers, this time looking at the support needs of Aboriginal kinship carers.

Perhaps you have asked yourself how you might impart hope with your clients? An outcome of change for children, bringing with it possibilities for fun, enthusiasm and optimism, it is possibly also something we struggle to pinpoint for ourselves as we journey with clients. In this blog entry, Lauren Thomas shares a story of hope found in the recovery process of a young person we've worked with.